(RNS) — How to celebrate the Eucharist while protecting public health is an issue confronting the U.S. Catholic bishops as the country gradually relaxes stay-at-home restrictions. I discussed the challenges involved in an earlier column, and since then, liturgists and medical experts have made their recommendations.

The U.S. Conference of Catholic Bishops is recommending that diocesan bishops consider the guidelines prepared by the Thomistic Institute at the Dominican House of Studies in Washington, D.C. Another set of recommendations has come from the Federation of Diocesan Liturgical Commissions, an organization that pools the expertise of diocesan liturgical offices across the country. Ultimately, it is up to each bishop to determine what to do in his diocese.

Both sets of recommendations were drawn up by liturgical experts in consultation with medical experts. Both attempt to protect public health while still allowing for Eucharistic celebrations in Catholic parishes. Both recommend extending the dispensation from the obligation to attend Mass on Sundays, especially for older people and those with preexisting conditions.

Both propose eliminating the greeting of peace and the Communion cup.

Both call for sanitizing high-use surfaces in the church before and after each service — pews, chairs, ambos, handrails, door handles, push plates, knobs and restrooms. Such cleaning may add to the time necessary between Masses.

Both guidelines say members of the congregation should wear masks and maintain social distance (6 feet) before, during and after church, which will mean smaller congregations. However, the federation asks, “Can Masses be live streamed into a secondary space, e.g. the school gym?” Communion could then be brought from the church to the secondary space.

The most notable difference between the two sets of guidelines is that the federation recommends that Communion on the tongue be discontinued, while the institute would still allow it in restricted circumstances. I believe that it is better to err on the side of safety and avoid Communion on the tongue. As the federation notes, “Medical personnel have emphasized that saliva is one of the worst fluids for transmission.”

In addition, the federal Centers for Disease Control and Prevention recommends soap and water rather than hand sanitizers, which should only be used when soap and water is not available.

Many people do not use hand sanitizers correctly.

“Although alcohol-based hand sanitizers can inactivate many types of microbes very effectively when used correctly,” says the CDC, “people may not use a large enough volume of the sanitizers or may wipe it off before it has dried.”

The CDC recommends that “When using hand sanitizer, apply the product to the palm of one hand (read the label to learn the correct amount) and rub the product all over the surfaces of your hands until your hands are dry.”

Following those instructions would require at least a minute between each Communion. Although theoretically possible, priests will inevitably rush the process if the Communion line is long.

Both the federation and the institute oppose using gloves while distributing Communion. As the federation notes, “gloves would have to be changed for each communicant.” On the other hand, in Italy the bishops have in negotiations with the government agreed to protocols requiring priests to wear gloves.

The institute would also prohibit those receiving Communion from wearing gloves, which I think is unreasonable. In order to avoid a Communion minister touching a communicant’s hand, the federation recommends using larger hosts.

The federation sees no problem with the priest wearing a mask during Mass and in fact urges it when the priest is giving Communion. In Italy, the bishops agreed with the government to have priests wear masks while distributing Communion. Meanwhile, in Germany, some churches are using Plexiglas barriers to separate the priest’s face and chest from the communicant while he gives Communion below the barrier.

Having Communion after Mass, says the institute, would allow the priest to remove the chasuble (the outer garment), “given that it is difficult to launder if anyone should sneeze or cough on him.” If this is a concern, the simple solution would be to remove the chasuble before Communion or skip it altogether when saying Mass. Vestments are less important than the integrity of the Eucharist. 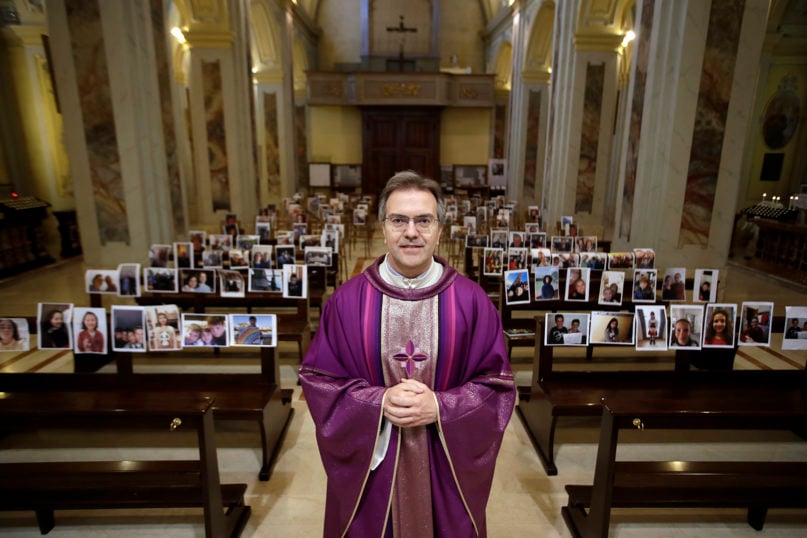 The federation and the institute have slightly different recommendations about singing. Both agree that all hymnals and missalettes should be removed and stored until the pandemic is over.

The institute notes that “Vigorous singing, especially in close proximity to others, may increase the risk of viral spread.” As a result, it discourages choirs. The federation agrees that large choirs should be discontinued, but believes singing is possible as long as everyone wears a mask.

One of the most controversial recommendations from the federation is that “cry rooms” for parents and babies should be closed and locked. Good luck on that one.

The federation shows its pastoral sensitivity by insisting that the clergy “communicate ahead of time with the entire parish. Give the people a preview of what social distancing or other precautions will be in place.”

It acknowledges the need for trained ushers who “should anticipate the need to gently deal with some chaos and fear for the first few weeks.” However, they “are not there to ‘police’ but some rules might put the people at ease.” Here the federation is more optimistic than I am about dealing with chaos.

The federation is especially good at emphasizing the need to set a good tone during this transition period with some specific recommendations:

These guidelines are simply recommendations to the bishops, who are responsible for deciding how the parishes in their dioceses will celebrate Mass during the COVID-19 pandemic. But as they discern what to do, I would urge them to pay more attention to what public health experts say than what politicians say, especially as it concerns the possibility of a second wave of infections. In addition, they need to consult widely among their priests and people.