(RNS) — Every evening, at 7 p.m., our family stands at the window of our apartment in New York City to join the chorus of cheers for the brave heroes who continue to serve us during this pandemic.

Like most people across the country and around the world, our hearts are with the health care professionals and other essential workers who are putting their lives on the line each and every day.

Our cheers and our loving attention — it’s the least that we can offer.

As with every story, though, there are hundreds more stories untold, floating somewhere beneath the surface. One of these untold stories is about a different type of struggle faced by people I know and care for.

It’s no overstatement that our botched response to the coronavirus has resulted in immense confusion and misinformation. One such uncertainty is the claim, made in hospitals around the world, that there is no personal protective equipment, or PPE, that can protect someone with a beard. This misinformation has had an enormous impact on Sikhs and others who maintain facial hair as part of their faith.

Recently two Canadian brothers, both Sikhs and both doctors, announced their decision to shave their beards in order to wear a particular kind of PPE. The two were lauded for their commitment to service and their willingness to sacrifice for their patients.

But as my friend Jaskaran Sandhu has pointed out, it’s not the feel-good story that some suggest.

While the N95 mask creates challenges for people with beards for numerous reasons, there are other types of gear, including powered air purifying respirators and controlled air purifying respirators, that offer full coverage for those with facial hair. Many Sikh health care providers, moreover, have been able to modify N95 masks and other equipment to create workable solutions for making sure they and their patients are protected. 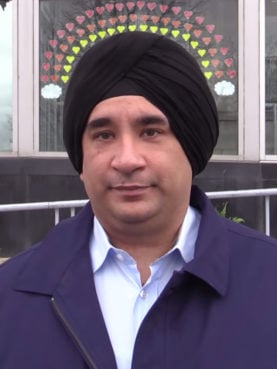 Dr. Sanjeet Singh Saluja is interviewed about the decision that he and his brother made to shave their beards. Video screengrab via Montreal Gazette

The story actually presents a false choice: Either shave your beard or stop serving your community in the greatest time of need. If you know anything about Sikh teachings, you will know that, for a devout Sikh, neither of these is acceptable.

That their leaders and employers either did not know about alternative options or failed to provide them exposes a deeper problem. Underneath this story is the deep pain of a people who have fought for their religious freedoms and sought alternatives to shaving, who live to serve humanity and also cherish their uncut hair as a priceless gift from their beloved gurus.

This is not a judgment against the brothers: All people are entitled to practice their faith as they see fit; it’s not our place to judge someone’s spiritual practices or choices. I also recognize that this is an extremely difficult position that I have not faced personally; it wouldn’t be fair for me to sit here and criticize someone for tough choices that I have never had to make.

My frustration here is twofold: First, if minority faith communities really had equal footing in American society, and if leadership sincerely held their commitments to diversity and inclusion, no Sikh medical professionals would be asked to choose between their faith and their career in the first place.

Second, that this story has gone viral ignores the millions of people who have figured out how to serve with their faith intact. It renders their contributions invisible and could even hurt the long-established legal rights of Sikhs to receive religious accommodations in the future.

I don’t yet know of a single Sikh in the United States who has shaved his facial hair to preserve his job in this pandemic. I hope not to hear of such an instance, both because of our commitment to protecting religious freedom and also because there are safe and viable solutions available.

But we don’t know what accommodations people of all faiths have had to make to serve during the crisis. Underneath the story of the Sikh brothers are the untold stories of those who have chosen to find a way to maintain their faith while continuing to serve, and whose service is no less valuable or lifesaving than that of those who are receiving extra commendations for making this false choice.

And underneath this story is the more important conclusion: that we have a responsibility to give all out front-line workers the tools they need, both as a matter of equality of opportunity and out of respect for the service and sacrifice they’re already offering us freely.