VATICAN CITY (RNS) — Pope Francis published his annual message for the 106th World Day of Migrants and Refugees on Friday (May 15), focusing especially on the plight of internally displaced people during the coronavirus pandemic.

“In light of the tragic events that marked 2020, I extend this message, which is dedicated to the internally displaced, to all those who found themselves experiencing and continue to experience uncertainty, abandonment, marginalization and rejection due to COVID-19,” Francis wrote.

The document, called “Like Jesus Christ, Forced to Flee: Welcoming, Protecting, Promoting and Integrating the Internally Displaced,” applies Pope Francis’ four-step approach for aiding immigrants to those who are left without a home in their own country due to war or natural disasters.

The Pope’s message was released ahead of the 106th World Day of Migrants and Refugees, which takes place on September 27, 2020.

In early May, the Section for Migrants and Refugees of the Vatican’s Department for Promoting Integral Human Development also released a new volume called “Pastoral Orientations on Internally Displaced People.” The document encouraged dioceses and parishes to champion the cause of these often-forgotten people.

The coronavirus pandemic has heightened concerns for those who are internally displaced. They often lack health services and information to prevent the spread of diseases.

The Pope’s message “focuses on the pastoral care of internally displaced people (IDPs), who around the world currently number about 50.8 million: 45.7 million as a result of conflict and violence, and 5.1 million as a result of disasters,” said Cardinal Michael Czerny, undersecretary of the migrants and refugees section of the Vatican Dicastery for Promoting Integral Human Development, during an online news conference on Friday (May 15). 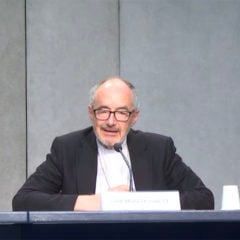 “It will, of course, be interesting to see how much is due to COVID-19 itself, a pandemic, a driver of internal displacement, but we won’t know that until next year,” he added.

In Myanmar, persecuted Rohingya Muslim communities have been left without a home and access to clean, running water, according to Amnesty International.

Romania has seen its coronavirus cases skyrocket as more and more marginalized Roma people contract the disease. In Syria and Jordan, displaced communities fleeing persecution by the Islamic State group now have to face the pandemic without the appropriate tools.

“Among the displaced, the recently returned, host communities, and all people of good will, the desire for peace could not be stronger. In Iraq, displacement has been going on for at least forty years. The causes are numerous, and there are no easy solutions. I have met many individuals and families who have been displaced five, seven, nine times in the past three to four decades,” said Fr. Joseph Cassar, director of the Jesuit Refugee Services in Iraq, speaking at the news conference from Erbil, where a major refugee camp lies outside the cities.

“The COVID-19 outbreak in Iraq and the mitigation measures imposed by public health and security authorities have had ramifications on almost all aspects of public and family life and disrupted the economy,” he added.

In the message, Pope Francis extended his suggestions about how to best welcome, protect, promote and integrate the internally displaced.

“When we talk about migrants and displaced, too often, we stop at numbers,” he said. “But it’s not about numbers, it’s about people! If we meet them, we will get to know them. And by knowing their stories we will be able to understand.” “We will understand, for example, that the uncertainty that we experienced with suffering because of the pandemic is a constant part in the life of the displaced,” he said.

Francis encouraged people to set aside “fears and prejudices” that prevent them from “making themselves close in order to serve.”

The pope mentioned the tireless work of health care workers during the pandemic who showed how “being close to our neighbor often means to be willing to take risks.”

In order to “reconcile we must listen,” the pope continued, adding that even if the messages are growing, today the ability to listen has diminished.

“During 2020, for weeks our streets were ruled by silence. A dramatic and eerie silence that, regardless, gave us the opportunity to listen to the screams of the most vulnerable, of the displaced and of our seriously sick planet,” he wrote.

No one must be left behind, Francis said.

“God didn’t want for the resources of our planet to only benefit the few,” he said.

News
Attorneys for John MacArthur denounce headlines reporting a church outbreak of COVID-19 cases
Opinion
There’s a theology driving Sean Feucht’s worship music protests — and it’s a popular one
Signs of the Times
Six things you need to know about Pope Francis and gay civil unions
Faith
Pope Francis’ support for civil unions is a call to justice — and nothing new
News
Divided reactions in US as pope backs same-sex civil unions
© Copyright 2020, Religion News Service. All rights reserved. Use of and/or registration on any portion of this site constitutes acceptance of our User Agreement and Privacy Policy, Privacy Statement and Cookie Notice. The material on this site may not be reproduced, distributed, transmitted, cached or otherwise used, except with the prior written permission of Religion News Service.