(RNS) — Most Americans who know about Ramadan at all know it as the holy month in which Muslims abstain from eating. What many of us don’t realize is that Muslims also consider this to be the month of giving.

Oral traditions trace the practice of giving during Ramadan back to the Prophet Muhammad, who, according to hadith, was already “the most generous of all people” and, during the month of Ramadan, “used to be more generous than the fast wind.”

This year, Ramadan was met by the coronavirus pandemic. Mosques were closed and congregations were unable to assemble, an unsettling disruption in an already unsettled time. But as religious actors often do, many Muslims have adapted their tradition of giving during Ramadan to meet our current moment.

Two of the largest Muslim-led organizations in the country — Emgage and Islamic Relief (USA) — have combined forces to bring together their respective expertise in civic engagement and humanitarian relief. Their campaign is calling on people to donate their federal stimulus checks to those in need. To date, they have already raised more than $12,700 through 1,371 supporters on their LaunchGood fundraising page.

Wa’el Alzayat, CEO of Emgage, explained, “Ramadan is a time where, because Muslims fast during the day, we become more in tune to the plight of people forced to fast full-time — the needy, homeless and low-income sectors of our society. We thought this campaign would be an incredible opportunity to draw upon our Islamic tradition and reallocate stimulus checks to those who need it most.”

The campaign is unique, but it’s not the only Muslim-led charitable effort during Ramadan. Muslims all over the country and across the world are rallying to support their communities. Boston-area Muslim groups collected and distributed 40,000 protective masks. A New York group, Muslims Giving Back, is distributing food in New York City every single night. The Seattle Muslim community’s multifaceted approach is helping locals with rent, groceries, medical supplies and wellness checks.

Feel-good stories like these counter the overwhelmingly negative media portrayals of Muslims. A 2019 study from the Media Portrayals of Minorities Project at Middlebury College found that Muslims are the most negatively portrayed minority in American media. A 2018 report from the Institute of Social Policy and Understanding, a Muslim think tank, found that “foiled plots” by perpetrators who are perceived as Muslims received seven and a half times the media coverage as violence being plotted by other groups.

Columbia University professor Edward Said cogently argued that this kind of coverage results in the sustained dehumanization of Muslim-perceived peoples. So, we need feel-good stories to counter the historic levels of anti-Muslim bias. 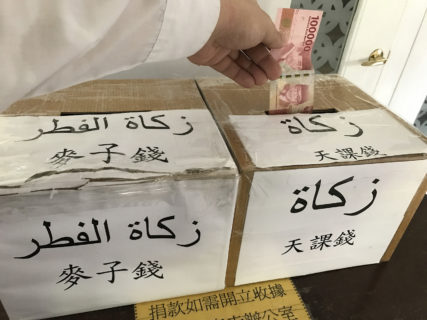 A Zakat donation box in a Taipei mosque during Ramadan in 2019 in Taiwan. Photo courtesy of Creative Commons

At the same time, these stories present problems. For one, they play into the “Good Muslim, Bad Muslim” dichotomy so eloquently articulated by Mahmood Mamdani. Second, stories about donating stimulus checks or helping people during a pandemic imply that Muslim generosity is anomalous or even exceptional. But charitable giving is a long-standing commitment that dates back to the founding of Islam and circles around the globe to this day.

We shouldn’t be surprised when we see good Muslims doing good things, because this is what the tradition has always taught. It is we who, having seen the individual dots of Muslims’ behavior, have failed to see the full picture.

It’s a remarkable thing when we see it clearly: here’s a community that has been so intensely and directly discriminated against, and here they come to serve the people around them indiscriminately, extending their own generosity to people who have knowingly harmed them. It’s a beautiful thing to witness and an inspiring example of what it means to go high when others go low.

That fact that charity (zakat) figures into the Five Pillars of Islam, the five definitional practices expected of every Muslim, should tell us the foundational importance placed on giving as a spiritual practice.

In fact, when I reached out to a few Muslim friends to ask for their favorite passages from the Qur’an on generosity, each of them told me there are far too many to choose just one. One friend speculated that it might be the most discussed quality instilled through the Qur’an.

Another friend sent me this verse from Surah al-Insan: “And they feed, for love of Him, the poor, the orphan, the prisoner, saying: ‘We feed you for Allah’s pleasure only. We desire no reward or thanks from you.’”

This verse speaks to the purity of intentions that animate selfless generosity. This verse also helped me understand the motivation behind the Muslim-led campaign to reallocate stimulus packages to the most needy.

Another verse echoed in my head as I heard the words of Alzayat of Emgage: “As Muslims, we have an obligation to provide for the most vulnerable in our communities: we don’t give contingent upon people liking us or being nice to us, we give in accordance with our tradition. We must not be complicit in a system in which vulnerable people are neglected and wealth is hoarded. As Muslims, it is our duty to help cultivate a world in which every person has their basic needs met.”

To learn more about the stimulus package fundraising or to donate, visit the campaign page on LaunchGood. The campaign is run jointly by two organizations – Emgage, which seeks to empower Muslim American communities through political literacy and civic engagement, and Islamic Relief USA, a humanitarian agency providing relief to all people, regardless of gender, race, or religion.