(RNS) — This week, it was reported that a couple of churches in the South had reclosed after reopening for in-person worship.

In Georgia, the Catoosa Baptist Tabernacle shut its doors after several families tested positive for COVID-19. In Texas, Holy Ghost Church, a Roman Catholic parish in Bellaire, did the same after a Redemptorist priest who worked there died of the virus.

In both cases, the reopenings came in response to actions by the state governor — though, strictly speaking, “actions” is not quite the right word.

Before Easter, Georgia Gov. Brian Kemp pleaded for churches to suspend in-person services but did not use his emergency powers to require them to do so. Likewise, Texas Gov. Greg Abbott issued a declaration designating “religious services conducted in churches, congregations, and houses of worship” as “essential services” that could take place in person (advising only that they be conducted “by practicing good hygiene, environmental cleanliness, and sanitation, and by implementing social distancing”).

Because woe unto governors in the Bible Belt who presume to tell churches what to do.

Take North Carolina. There, on May 5, Gov. Roy Cooper issued an executive order that exempted worship from his ongoing prohibition of “mass gatherings” and specifically permitted people to leave their homes to travel to a place of worship. But: “Because the risk of COVID-19 spread is much greater in an indoor setting, any gatherings of more than ten (10) people that are allowed under Subsection 6(A) shall take place outdoors unless impossible.”

In response to a request for clarification from state senators, Cooper’s office later issued a “Guidance for Religious Services and Mass Gathering Restrictions” that effectively permitted indoor worship of any size — by granting that “there may be situations in which particular religious beliefs dictate that some or all of a religious service must be held indoors and that more than ten persons must be in attendance.”

Nevertheless, the 10-person rule elicited a lawsuit in federal court from Return America, a North Carolina organization that aims “to build a network of churches and individuals to educate, motivate and mobilize citizens in a united effort in promoting Judeo-Christian values.” On May 16 U.S. District Judge James C. Dever III issued a temporary restraining order barring the state from enforcing the rule.

Meanwhile, in Georgia and Texas, some religious leaders took their governors’ reopening plans as a green light.

Catoosa Baptist Tabernacle began in-person worship after Kemp issued an executive order April 20 giving barbers, tattoo artists and massage therapists the right to practice their trades. And it was Abbott’s announcement of the first phase of Texas reopening April 27 that caused Cardinal Daniel DiNardo, the archbishop of Galveston-Houston, to issue a letter to the faithful instructing all parish churches to open for private prayer several hours each day and to make provision for confession. Churches were also permitted to resume public Masses, DiNardo wrote, “(i)n light of the Governor’s guidelines for the reopening of other buildings and institutions.”

Are the two churches outliers or canaries in the coal mine, reshuttering ahead of a spike of COVID cases following state reopenings? The latest modeling out of PolicyLab at Children’s Hospital of Philadelphia suggests it’s the latter.

At an unscheduled news briefing Friday afternoon, President Trump announced that houses of worship are essential services and threatened to “override” governors who refuse to obey a directive from him to allow them to reopen. There could soon be a lot more canaries. 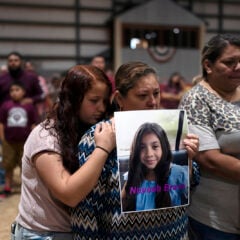