(RNS) — Eric Metaxas, a Christian author, radio personality and one of the president’s most prominent court evangelicals, wants to make America great again. Earlier this week we got a glimpse of what he might mean by such a return to greatness, and it speaks volumes about the state of white evangelicalism in the age of Donald Trump, particularly as it relates to race.

Last week, Metaxas published a tweet in response to Joe Biden’s comments during a radio interview with African American talk show host Charlamagne tha God. At the end of the interview, the presumptive Democratic presidential nominee said, “If you have a problem figuring out whether you’re for me or Trump, then you ain’t black.”

Metaxas reacted on the social media platform that he has called “a sick and nasty place”:

“Just now Joe Biden tried & failed to walk back his ‘You ain’t black comment’ by saying ‘Sho nuff you is so shizzle ain’t black! Cuz Massa Trump be fixin to put all y’alls behinds back in chains! You done got you sefs no choice in dis hyah. And that’s a FO sho for sho!”

Metaxas eventually deleted the tweet and then devoted part of his own syndicated radio program on Tuesday (May 26) to defending it. Metaxas claims he was poking fun at how Biden’s use of “black lingo”— especially the former vice president’s use of the phrase “ain’t black”— serves as an example of how “old white Democrats” co-opt African American speech for political gain.

Biden’s comment was, as many have pointed out, inappropriate and offensive for its presumption to speak for African Americans. Metaxas’ tweet, however, was worse. His language tapped into the nearly 200-year-old practice of blackface minstrel shows, a form of white entertainment that has long been a source of pain in the African American community.

These shows, performed during the 19th century by white entertainers with blackened faces and continuing well into the 20th century through popular radio programs like “Amos & Andy,” mimicked enslaved Africans on Southern plantations and mocked post-Civil War black culture.

Minstrel shows provided comedic escape for the disgruntled working class. They offered a space where they could mock the character, looks and language of their cultural inferiors and remind themselves that despite their own feelings of victimhood, they were still part of a superior race.

According to historian Dale Cockrell, the white people who attended these shows felt “squeezed politically, economically, and socially from the top.” They invented minstrelsy, Cockrell adds, “as a way of expressing the oppression that marked being members of the majority, but outside the white norm.”

Unlike Virginia Gov. Ralph Northam, Canadian Prime Minister Justin Trudeau and, most recently, late-night talk show host Jimmy Fallon, Metaxas, as far as I know, has never covered his face with shoe polish at a Halloween party or impersonated an African American in a comedy skit.

But his use of minstrel-style faux dialect to entertain his fellow largely white, evangelical, pro-Trump followers, many of whom feel “squeezed” by those who have cultural power in the media, the academy and the so-called Washington swamp, was a form of blackface. 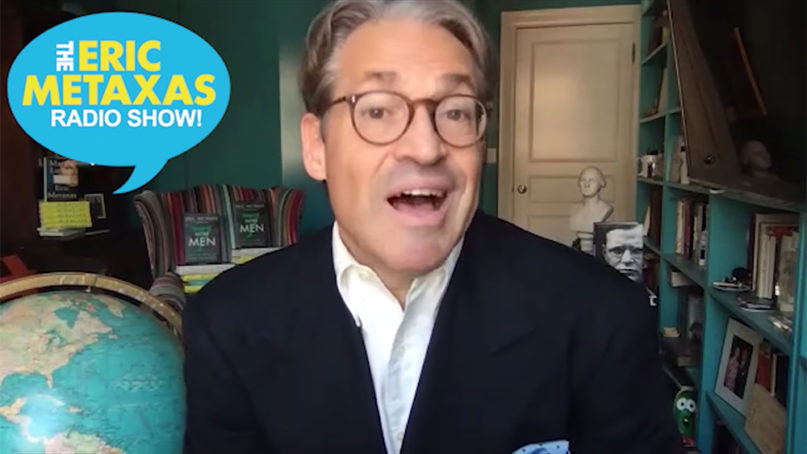 Eric Metaxas speaks during his radio show May 26, 2020. Video screenshot

On Tuesday, Metaxas told his radio audience that he wished he had never published the tweet — not because he thinks it was racist, but because he should have anticipated the attacks he would receive from the “woke maniacs” on Twitter. Having said that, he apologized to those who were “truly offended” and were not part of the “woke mob.”

In most media environments, Metaxas would have been fired, or at the very least disciplined, for such a tweet. But his show is part of the Salem Radio Network, a right-wing, pro-Trump outlet that markets much of its programming to conservative white evangelical Christians.

There will likely be no consequences for this tweet, which mocked Biden and, better yet for Salem executives, gave Metaxas an opportunity to use his “apology” to further denigrate the former vice president on his show.

This is the state of Christian talk radio today.

But Metaxas’ tweet, and his subsequent justification of it, reveals an even deeper problem. White evangelicals do not recognize systemic racism in American life and are thus incapable of developing a meaningful political philosophy to address it.

Either Metaxas deliberately tweeted what he did about Biden to stoke his base (which is certainly possible; he knows where his bread is buttered), or he has no clue that such a tweet is offensive to most African Americans. For the sake of argument, let’s assume that the latter is true and Metaxas, despite his Yale degree, is just clueless.

Rather than humbly listening to his critics, examining his own motives for writing such a tweet and reading some good American history on the painful legacy of blackface (he styles himself as a historian), Metaxas decided to go on his radio program and try to convince people that he is “not a racist” because he wrote a book about William Wilberforce (the 19th century politician and reformer who aided in the end of the slave trade of England) and has published essays about Jackie Robinson, Rosa Parks and other great African Americans.

For the record, I don’t think Metaxas is a racist, but that is not the point. His self-defense illustrates how many white evangelicals currently think about race.

Granted, one is hard-pressed to find the kind of blatant white evangelical racism present in the United States during the 19th and 20th centuries. White evangelical leaders have come a long way in condemning individual acts of racism.

Take, for example, the case of George Floyd, the Minneapolis man who died Monday after Minneapolis police officer Derek Chauvin knelt on his neck for more than five minutes. A few court evangelicals condemned Floyd’s death.

Jack Graham, pastor of the 45,000-member Prestonwood Baptist Church in Plano, Texas, tweeted: “We cannot ignore the tragic death of George Floyd. … Silence is not an option. We condemn hate in all its forms and stand together to end injustice.”

Ralph Reed, the Christian right political operative, retweeted Graham’s tweet, saying: “Amen and well said. We oppose bigotry in all its ugly forms and I call on swift action to bring justice for the family.”

Yet it is hard to reconcile these tweets with the racism and racist policies of Trump, the president to whom Reed and Graham pledge their loyalty because of his views on abortion and religious liberty.

Yes, the condemnation of specific acts of racism is necessary. But, as tweets by Graham, Reed and especially Metaxas reveal, white evangelicals have a long way to go before the systemic sin of racism starts to influence their political priorities.

(John Fea teaches American history at Messiah College. He is the author, most recently, of “Believe Me: The Evangelical Road to Donald Trump.” He blogs daily at www.thewayofimprovement.com. The views expressed in this commentary do not necessarily reflect those of Religion News Service.)