(RNS) — Last Friday (Jan. 3), nearly every major conservative evangelical supporter of President Donald Trump gathered at the El Rey Jesus Church in Miami for the kickoff to the “Evangelicals for Trump” campaign.

If Mark Galli’s recent editorial in Christianity Today taught us anything, it is that American evangelicalism is a diverse group. Evangelicals find unity in their commitment to the redemptive work and resurrection of Jesus Christ, the divine inspiration of the Bible and the necessity of sharing their faith with others. They do not always share the same political convictions.

When Galli criticized Trump for his “grossly immoral character” and urged his fellow evangelicals to consider how their blind support of Trump is hurting the witness of the church, pro-Trump evangelical leaders pushed back. In an open letter to Christianity Today, they said that, despite his many flaws, the president has delivered for evangelicals on matters related to abortion, religious liberty and supporting Israel. Last weekend’s rally in Miami was a continuation of this pushback.

As has been noted elsewhere, these evangelical flatterers of Trump are not unlike the court clergy of late medieval and Renaissance-era Europe. In his book “The Origins of Courtliness,” historian C. Stephen Jaeger retells a story once told by the 11th-century church reformer Petrus Damiani about St. Severin, once archbishop of Cologne, whose sole offense — punished by leaving him to wander the Earth  — was that as a cleric at the king’s court, he took so keen an interest in the affairs of the state that he neglected chanting the liturgy at the prescribed hours. 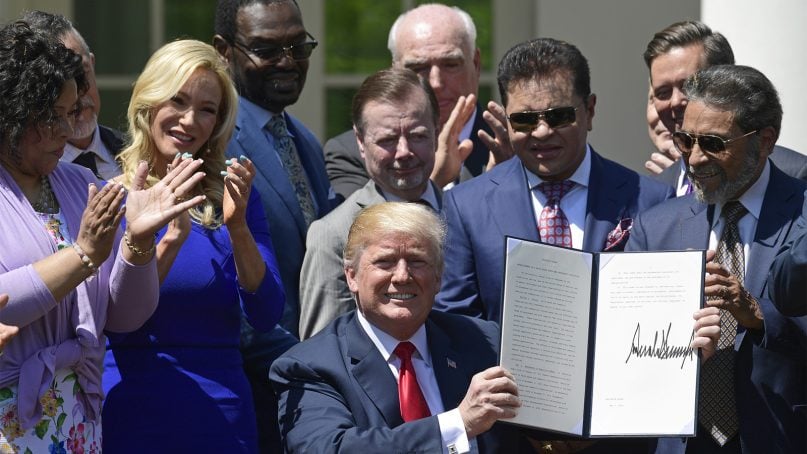 President Donald Trump, largely surrounded by evangelical leaders, holds up an executive order that he signed during a National Day of Prayer event in the Rose Garden of the White House in Washington, D.C., on May 3, 2018. (AP Photo/Susan Walsh)

The tale sheds light on a common problem for clergymen with access to political power: The king’s court can be a dangerous place, even for the most devout. Courtiers have one goal: to gain access to and win the favor of the monarch. Such access brings privilege and power and an opportunity to influence the king on important matters — if, of course, the king is willing to listen.

In his well-known guide to court life, 16th-century Italian courtier Baldesar Castiglione described the court as an “inherently immoral” place, a worldly venue “awash with dishonest, greedy, and highly competitive men.” One historian has described courtiers of the time as “opportunistic social ornaments”; another described them as “chameleons.”

The skills needed to thrive in the court, in short, are different from the virtues needed to lead a healthy Christian life or exercise spiritual leadership in the church. Most medieval courts had their share of clergy, bishops and other spiritual counselors, and historians agree that their behavior was indistinguishable from that of secular courtiers, whom Damiani described elsewhere as “ruthless, fawning flatterers” in a “theater of intrigue and villainy.”

Sylvius Piccolomini, the 15th-century Renaissance humanist who would eventually become Pope Pius II, was a strong opponent of court clergy. It was very difficult, he said, for the Christian courtier to “rein in ambition, suppress avarice, tame envy, strife, wrath, and cut off vice, while standing in the midst of these (very) things.”

In the United States we don’t have kings, princes or courts, but we do have our own version of religious courtiers, who boast of, in Southern Baptist theologian Richard Land’s gleeful description, “unprecedented access” to the Oval Office.

No one is quite sure what kind of role the court evangelicals actually play in the Trump White House. Some have suggested that they advise the president on policy issues related to religious freedom, foreign policy and judicial appointments. In this Sept. 1, 2017, file photo, religious leaders pray with President Donald Trump after he signed a proclamation in the Oval Office of the White House in Washington for a national day of prayer to occur on Sept. 3, 2017. (AP Photo/Evan Vucci, File)

New York City minister A.R. Bernard, who cut ties with Trump in August 2017 after the president refused to condemn white supremacist rioters in Charlottesville, Virginia, said that evangelicals were not “afforded the proximity to the president” to have any real influence. Meetings took place, he said, “but nothing substantive” was discussed.

We do know, however, that the court evangelicals like to visit the White House. They flank Trump whenever he signs bills that matter to them. They smile for the Oval Office cameras and take selfies that they can share with their social media followers.

On May 3, 2017, the evening before the National Day of Prayer, a group of pastors had dinner with Trump in the White House. One of the lesser-known court evangelicals, the Rev. Greg Laurie, pastor of Harvest Christian Fellowship in Riverside, California, said that he and the rest of the invited guests were “reduced to being like little children” when Trump took them on a tour of the Lincoln bedroom.

Court evangelicals may not approve of everything Trump does, but they still believe God has put them in the court for a divine purpose. Land, for one, decided to stay committed to Trump after the president’s statements in the wake of Charlottesville because “Jesus did not turn away from those who may have seemed brash with their words or behavior.” Land added that “now is not the time to quit or retreat, but just the opposite — to lean in closer.”

Johnnie Moore, a publicist (Editor’s note: and occasional Religion News Service contributor), remained with Trump after the Charlottesville comments because “you only make a difference if you have a seat at the table.”

The only hope for the evangelical leaders is that they spent their time “explaining to (the president) that racism is an erroneous sin and there is not moral equivalency between the two sides,” Witherington concludes. “Otherwise, they are complicit with the sins of our leaders.”

There is a more pious model for the court evangelicals: As recorded in the Old Testament Book of Samuel, the prophet Nathan took his call from God seriously when he got his “seat at the table.”

When David committed adultery with Bathsheba and then arranged for her husband, Uriah, to be killed on the battlefield to cover up David’s sins, Nathan rebuked his king. He told David the story of a poor man whose beloved “little ewe lamb” was stolen by a self-centered rich man who had plenty of lambs but wanted the poor man’s only lamb to serve his guests.

When David’s anger “was greatly kindled” against the rich man in the story, Nathan said to the king, “You are the man!”

(John Fea, author of “Believe Me: The Evangelical Road to Donald Trump,” is a professor of  American history at Messiah College. The views expressed in this commentary do not necessarily reflect those of Religion News Service.)