Floyd died slowly as a police officer constricted his airway with a knee on the back of his neck. His death was another case of an unarmed black American killed during an encounter with police, following other high-profile deaths like Breonna Taylor in Louisville, Botham Jean in Texas, and Philando Castile in St. Paul, Minnesota.

“Another unarmed African American killing,” Smith wrote on Twitter. “This time in South Minneapolis in the neighborhood where I grew up. The heartbreak continues. I shouldn’t have to fear for my life because of the color of my skin.”

Growing up, Smith lived not far from Cup Foods, the shop near where Floyd died, and he has fond memories of visiting the drug store that used to occupy the same space that Cup Foods now stands.

He later became a church planter and served as founding pastor of Sanctuary Covenant Church, a multiethnic congregation in North Minneapolis. Author of The Post-Black and Post-White Church: Becoming the Beloved Community in a Multi-Ethnic World, he is now co-pastor of Bayside Church Midtown, an intentionally diverse congregation of 3,500 in Sacramento. He spoke by phone this week with RNS Editor-in-Chief Bob Smietana

What did you experience when you watched the video of George Floyd?

It broke my heart. Because you’re listening to a man that is losing his life. And it doesn’t have to be. I don’t understand. If a guy is unarmed and he’s handcuffed and there are multiple officers on the scene with weapons and he’s saying he can’t breathe. And he is saying that his stomach hurts. This grown man is, at one point, crying out for his mother. To see bystanders that are filming it on their phones and they’re crying out to the police officers to let up. And yet to see that the officer just keeps (his knee) on the neck and the back of the head of George Floyd.

I don’t know how you can look at that video and your heart not be broken.

What kind of response have you seen from faith leaders?

I would say that on the one hand, those that have been involved in ministry that includes initiatives of justice and reconciliation — the response has been consistent. A call for justice, the call for love, a call for reconciliation, a call for changes through public policy. But there’s also a segment of the body of Christ that, unfortunately, has consistently remained silent. I’ve been encouraged, especially in the evangelical wing of the church, to see more pastors speaking out. Being brokenhearted, calling for change.

But then there’s also a significant segment of evangelicalism that is either silent or late to the party when it comes to the church calling for justice.

Hundreds of protesters gather May 26, 2020, near the site of the arrest of George Floyd, who died in police custody Monday night in Minneapolis, after video shared online by a bystander showed a white officer kneeling on his neck during his arrest as Floyd pleaded that he couldn’t breathe. (AP Photo/Jim Mone)

In a recent Facebook Live conversation with other pastors, you talked about how the New Testament story of Jesus and the woman at the well shows an example of how pastors and other Christians can start talking about the issue of race. Can you explain that?

We forget that Jesus, the savior, c­­­ame as a marginalized, oppressed Jew. He came as an Israelite, Palestinian, brown-skinned human being. The main ways in which Jesus declared and demonstrated the gospel that the kingdom of God is near was among the most vulnerable in the society that he navigated. And Jesus going to Samaria in John chapter 4 is another great example of that.

But it’s not just that he went. It’s how he went. The son of God goes to Samaria and he sits down at a well.  And he looks up at a marginalized outcast woman, who was despised by the religious leaders and asks her for a drink. And so if Jesus can do this, why can’t my white brothers and sisters in the evangelical church come and sit at the well of the African American church, the church that was birthed from slavery, from oppression, and sit at the well and ask for a drink?

I think that would make a significant transformative difference as we attempt to navigate the issue of race and bring a solution.

That posture of humility puts you in a position of receiving, not just giving. I think the posture of evangelicalism to under-resourced communities, black and brown communities, has for the most part been a giving posture. A looking down posture.

In John 4, Jesus begins with the receiving posture.

May I have a drink?

And so, what if evangelicalism was willing to drink — to receive the pain, the grief, the stories, the experiences of the African American church. To receive its preaching, its worship, its theology of how the gospel emerges among the suffering — how the gospel empowers those at the bottom of the social structure.

Evangelicalism needs a more humble posture of receiving and learning. Allow the church that has been deemed the other, the marginalized church, to be the teacher at this moment, and to have the most dominant form of the church in America be the student who is learning to share power.

Some of the debate going on within evangelicalism about race, that’s just some people preserving what they already believe. That’s them not gaining insight from the African American church that, historically, has believed in the authority and the centrality of scripture, that on many issues outside of race would share some similar values and positions with evangelicalism.

Evangelicalism must be willing to hear terms like ‘white supremacy’ and ‘white privilege’ and ‘white nationalism’ and the impact that not only those words, but the actions behind those words, have had on African Americans — the impact they are having on African Americans today — without getting offended, without becoming defensive, without walking away from the table. 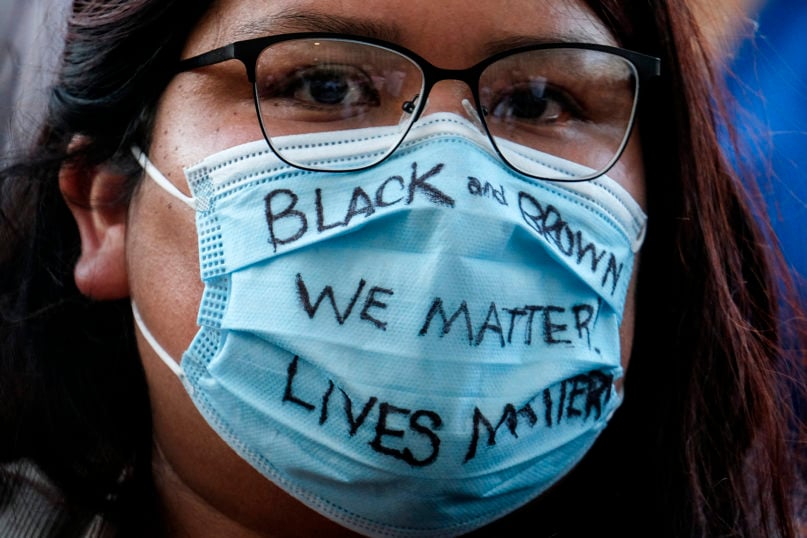 A demonstrator wears a mask with a message during a protest of the death of George Floyd, a Black man who was in police custody in Minneapolis, in downtown Los Angeles, on May 27, 2020. (AP Photo/Ringo H.W. Chiu)

If you were talking to faith leaders right now, what would you tell them to do?

We also need to reflect on how God wants to grow our current relationships so they become more diverse, more multiethnic. So that we are more consistently digesting the stories, the dreams, the pain of those that have been the victims of oppression in our nation. We need to be better listeners. Then, finally, we need to look at the plac­es of power and privilege — those need to become places where there’s a greater sense of diversity.

I’m hopeful. There are more expressions of the multiethnic church being led by people of color. And I’m not saying I’m totally against white brothers and sisters being the lead pastors of multiethnic churches.

I believe you need more multiethnic churches led by people of color — where white people are willing to sit under the spiritual, pastoral authority of non-white people. Where men are sitting under the authority of women.

The best gift I can give to the body of Christ, to the church, is to be my full Christian African American self.