(RNS) — Sunday was Pentecost, the first day of the Christian church, when the presence of the Holy Spirit appeared as tongues of fire above the heads of Christ’s disciples.

It was a strange, and a fitting, day to talk about fire. A strange and fitting day, too, to talk about that day’s miracle: the reimagining of disparate bodies, disparate communities, into a single, though by no means uniform, body of Christ.

The first Scripture reading of the service Sunday, as is customary for Pentecost, came from the Book of Acts. It is the story of how the Holy Spirit’s tongue of fire looses the tongues of the diverse people of Jerusalem, all of whom hear the disciples prophesy in their native language.

“Each one heard them speaking in his own language,” we learn. Each wonders at how “Parthians and Medes and Elamites and residents of Mesopotamia, Judea and Cappadocia, Pontus and Asia, Phrygia and Pamphylia, Egypt and the parts of Libya belonging to Cyrene, and visitors from Rome, both Jews and proselytes, Cretans and Arabians, we hear them telling in our own tongues the mighty works of God.”

It is one of so many reminders in the New Testament of what Christianity not only is, but must be: a faith that at its best transcends divisions of race, of class, of gender, even as it preserves our understanding of one another as fully embodied, irreducible and earthly persons: people whose experiences, embedded in those of the whole world, are mediated by the interconnected lattice of their identities.

So too our second lesson, from First Corinthians: “For just as the body is one and has many members, and all the members of the body, though many, are one body, so it is with Christ. For by one Spirit we were all baptized into one body — Jews or Greeks, slaves or free — and all were made to drink of one Spirit.” The Christian body, at Pentecost, is defined as one in which all are at once united and distinct: in which we are all welcome as our full selves, in our own language.

Sunday, too, in the midst of the nationwide protests in the wake of the killing of George Floyd, an unarmed black man, by a white police officer, protesters in New York tagged the Catholic St. Patrick’s Cathedral with Black Lives Matter slogans and “f— the NYPD.”

CNN’s law enforcement analyst James Gagliano put it in terms of defilement on Twitter: saying “Protesters” desecrate St. Patrick’s Cathedral — one of the most sacred Catholic Churches in the world.

New York City tonight: “Protesters” desecrate St. Patrick’s Cathedral — one of the most sacred Catholic Churches in the world. pic.twitter.com/7KHueVmEw6

To imagine that a church could be desecrated by political protest against inequality; by the furious and outspoken pursuit of justice; by the affirmation that the lives of those who have been historically marginalized and dehumanized have value, not merely by anodyne and automatic default (as in the oft-disingenuous use of the counterphrase all lives matter) but in a full and real way, is to catastrophically misunderstand the message both of Pentecost, and of Christianity as a whole.

The life, the death and the resurrection of Jesus Christ together tell a story of profound reversal, of political transgression, of necessary upheaval. The last shall be first. The mountains are made low. The promised king comes into Jerusalem on an ass. The Messiah is crucified. God becomes man.

The problem is not that “BLM” was written on the outside of the church, but rather that such an affirmation should already be visibly present inside the church’s physical as well as social structures. It should have already been printed on its notice board.

The vision of a new heaven and a new earth is also, after all, a distinctly political vision: the eschatology of the New Jerusalem, not as earthly empire, to be sure, nor as political party, but nevertheless as a vision of a shared, common life; of people as a body: which is at its heart what politics should be.

To understand Christian life as anything but liberatory — anything but transgressive against the prevailing injustices of the social order of Jesus’ day, and our own — is to denature it of its strangeness.

It is the precise juxtaposition of peace and violence, of the difficult love demanded toward one’s own enemy in the moment of the particular, and yet the furious and at times, violent denouncing of those sinful ideals, institutions and (as in the case of the story of the money changer) properties that constitute our political idols, that renders Christianity dangerous. To turn the other cheek is not to turn a blind eye to our brethren. To forgive is not to refuse to call to account.

Any Christian institution derelict in its commitment to fighting injustice, any Christian institution that fails to treat racism, or indeed any other structural social sin, as seriously as it does the classically understood, individually focused sins of pride, envy or lust, has failed to understand its role as a body of believers.

Any Christian institution that conflates the authentic love of neighbor — the recognition of the other as a full reflection of the imago dei, the forgiveness of our enemies, the demands of charity — with the courtly affectations of “civility” has failed to live up to the political promise of reversal, renewal and transformation played out in the Gospels.

Christ’s message of love does violence to systems of hatred. There are few gatherings more appropriate to Pentecost than protest. News
Amid mounting protests in the US, Pope Francis calls for unity in diversity 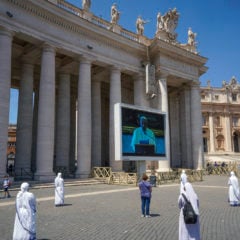 Coronavirus
Lament: A day to mourn Signs of the Times
Who would you choose, Jesus or the Spirit?
Follow us on Facebook!
Submit your photos to RNS