(RNS) — In recent days, pastors, priests, imams, rabbis and other faith leaders have joined protests against racism and police brutality in the wake of the death of George Floyd at the hands of police in Minneapolis. They’ve handed out water and provided medical care and other support for protesters, been tear-gassed, prayed, marched in the streets and declared that Black Lives Matter.

In doing so, they followed in the footsteps of clergy and ordinary believers who marched for civil rights and for equal rights for women, demanded an end to poverty and the Vietnam War, and denounced the use of nuclear arms.

A look at some historic protests, from the archives of Religion News Service: 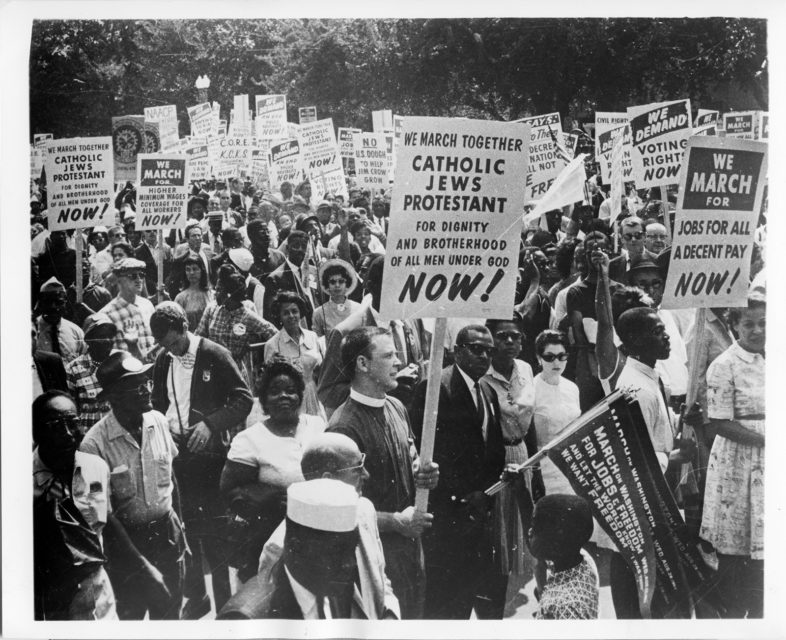 Religious participation in the March on Washington for Jobs and Freedom exceeded all expectations in 1963. In addition to many banners and signs designating specific religious groups, many churchmen and women marched as Protestants, Catholics and Jews, united in their support of full equality for all American citizens. More than half the signs in the march were those of churches, synagogues and related agencies. RNS photo by Seth Muse. Photo courtesy of the Presbyterian Historical Society 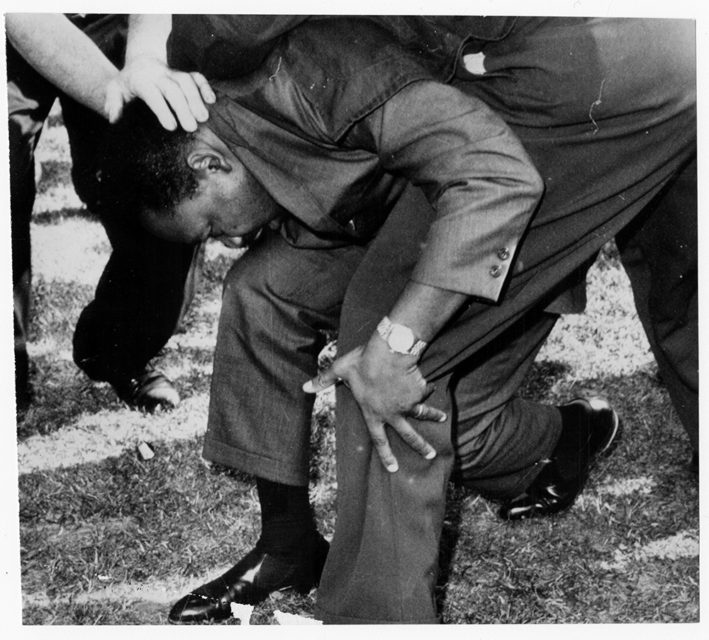 The Rev. Martin Luther King Jr. is struck by a rock during a march in Chicago on Aug. 5, 1966. RNS archive photo. Photo courtesy of the Presbyterian Historical Society 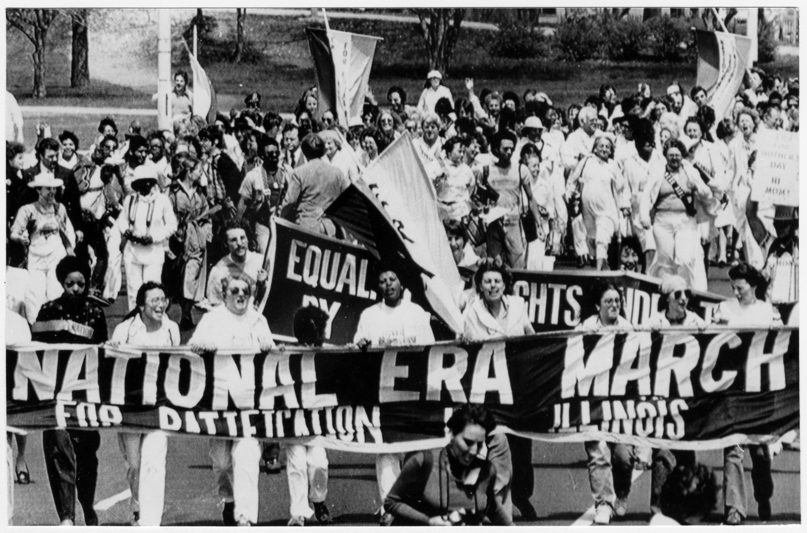 Part of a crowd of 25,000 demonstrators march along Chicago’s lakefront on May 10, 1980, in support of the Equal Rights Amendment. Three hundred delegations, some from as far away as Alaska, gathered for the downtown rally, in an event billed as the centerpiece of a lobbying effort leading up to an Illinois ratification vote scheduled for May 14. RNS archive photo. Photo courtesy of the Presbyterian Historical Society 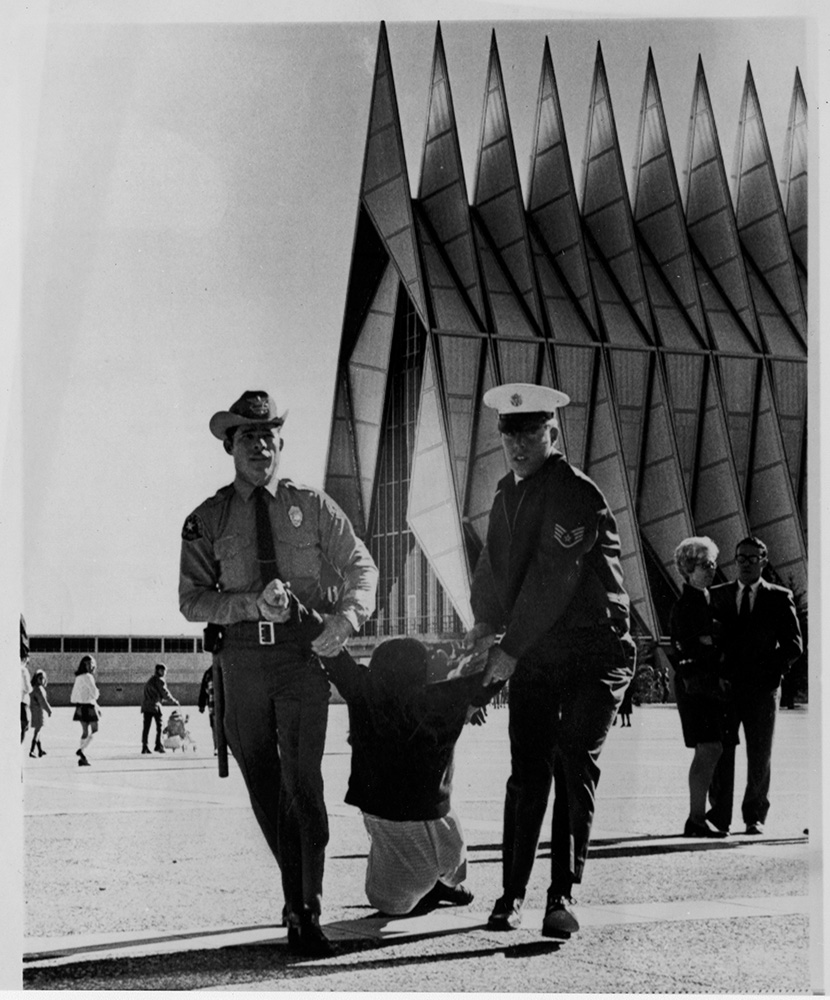 Police carry off a demonstrator identified as Barbara Minor, of Denver, after breaking up an anti-air war protest during chapel services at the Air Force Academy, near Colorado Springs, Colorado, in 1971. More than 30 protesters, including seven nuns, six clergymen and 19 lay people, were detained briefly by Air Police and county sheriff’s officers for handing out pamphlets denouncing continued U.S. bombings in Southeast Asia. Some 60 members of Clergy and Laymen Concerned joined in a nonviolent silent witness during Catholic and Protestant services at the chapel, seen in the background. One protester left the service every five minutes to dramatize a claim that U.S. bombs were killing 300 civilians — or about one every five minutes — every day in Laos and Cambodia. RNS archive photo. Photo courtesy of the Presbyterian Historical Society 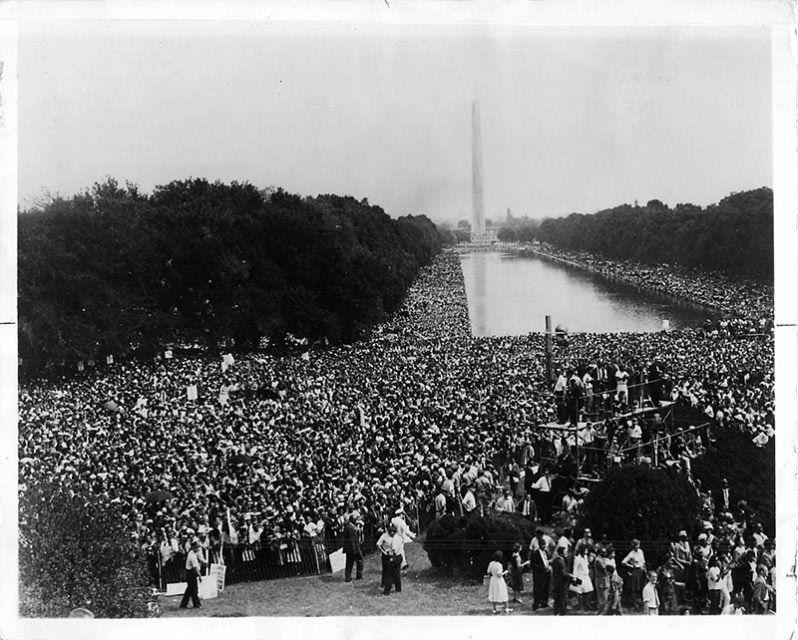 On Aug. 28, 1963, the Rev. Martin Luther King Jr. addressed the crowd gathered during the March on Washington, delivering his “I Have a Dream” speech. RNS archive photo 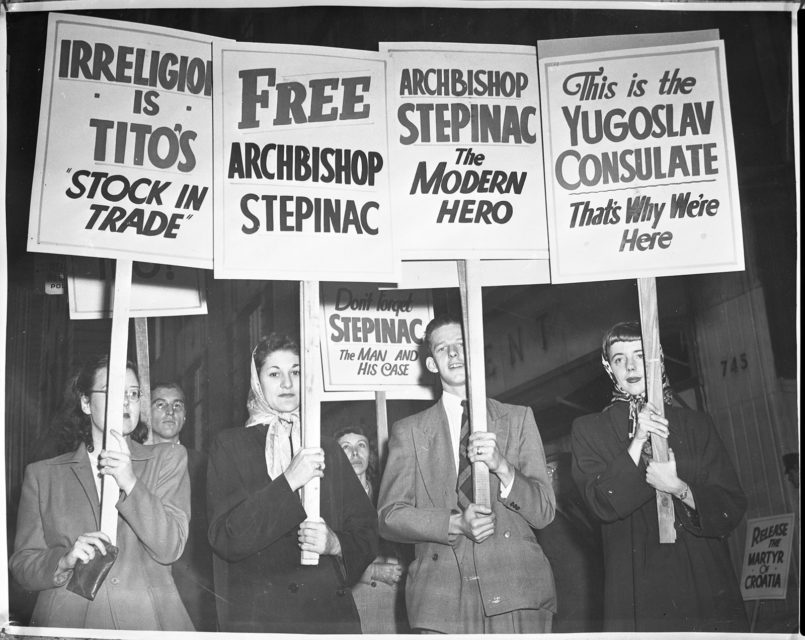 Students picket outside of the Yugoslavian Consulate in New York City on Oct. 11, 1948, to mark the second anniversary of the imprisonment of Archbishop Aloysius Stepinac of Zagreb. RNS archive photo by Lou Pentler. Photo courtesy of the Presbyterian Historical Society 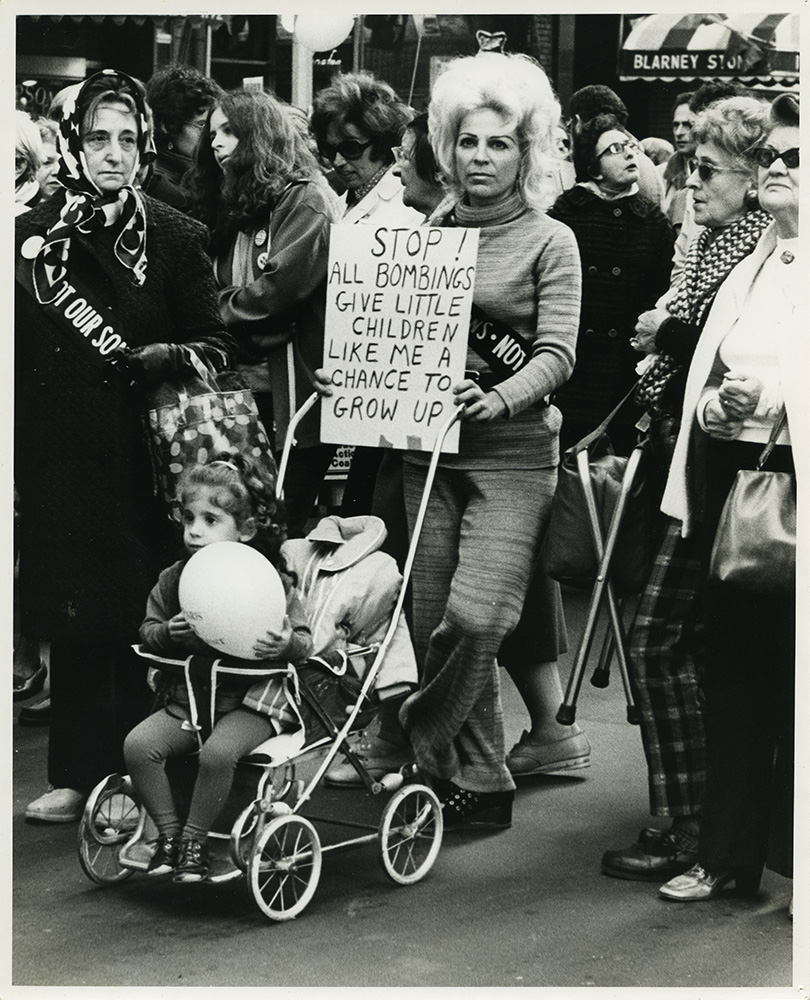 A mother and her child join a massive peace march in New York, part of a nationwide protest against the war in Vietnam, in 1971. In addi­tion to protesting the war, demonstrators carried banners and heard speeches attacking racism, the wage freeze, the Attica prison tragedy and the atom bomb test on Amchitka Island in the Aleutians. RNS archive photo. Photo courtesy of the Presbyterian Historical Society 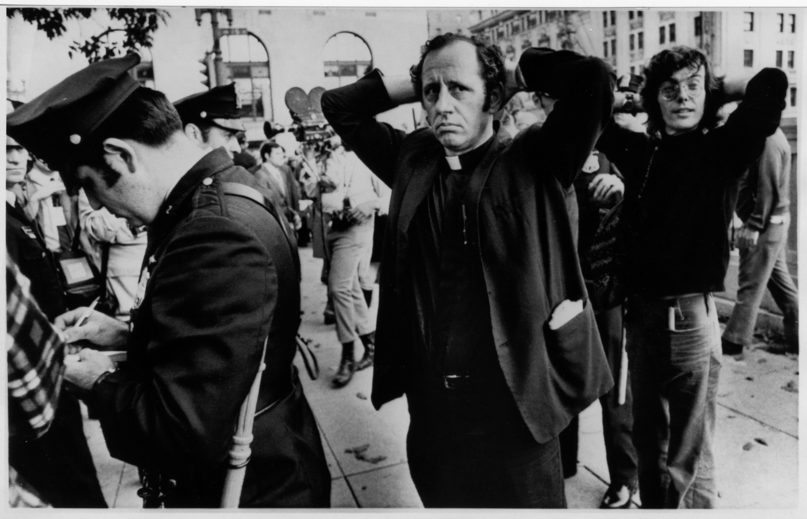 The Rev. James Groppi, center, the civil rights activist priest from Milwaukee, and militant leader Rennie Davis, right, are arrested on Oct. 26, 1971, during an anti-war demonstration near the White House in Washington. RNS archive photo. Photo courtesy of the Presbyterian Historical Society 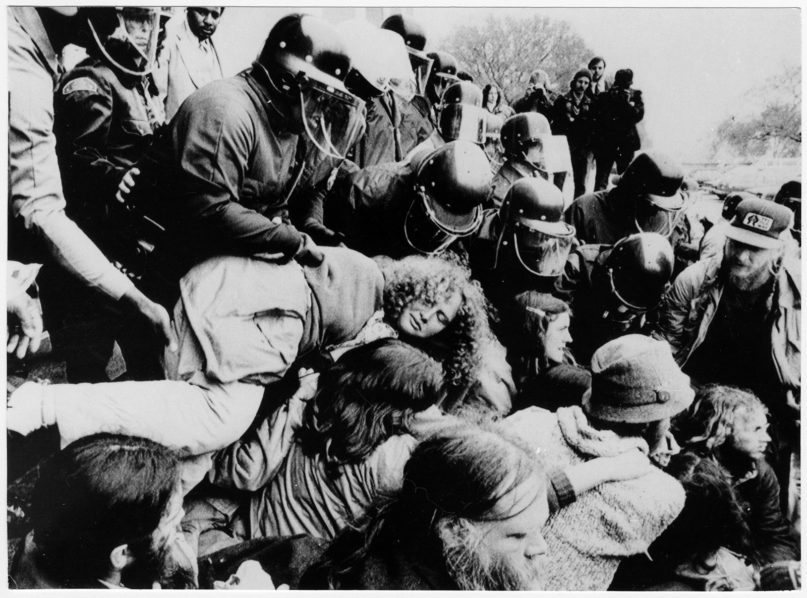 Police remove anti-nuclear demonstrators from the main entrance to the Pentagon on April 28, 1980. The police arrested 300 protesters — mostly young people — on charges of obstruction and defacing government property with ashes and a red-bloodlike substance. RNS archive photo. Photo courtesy of the Presbyterian Historical Society 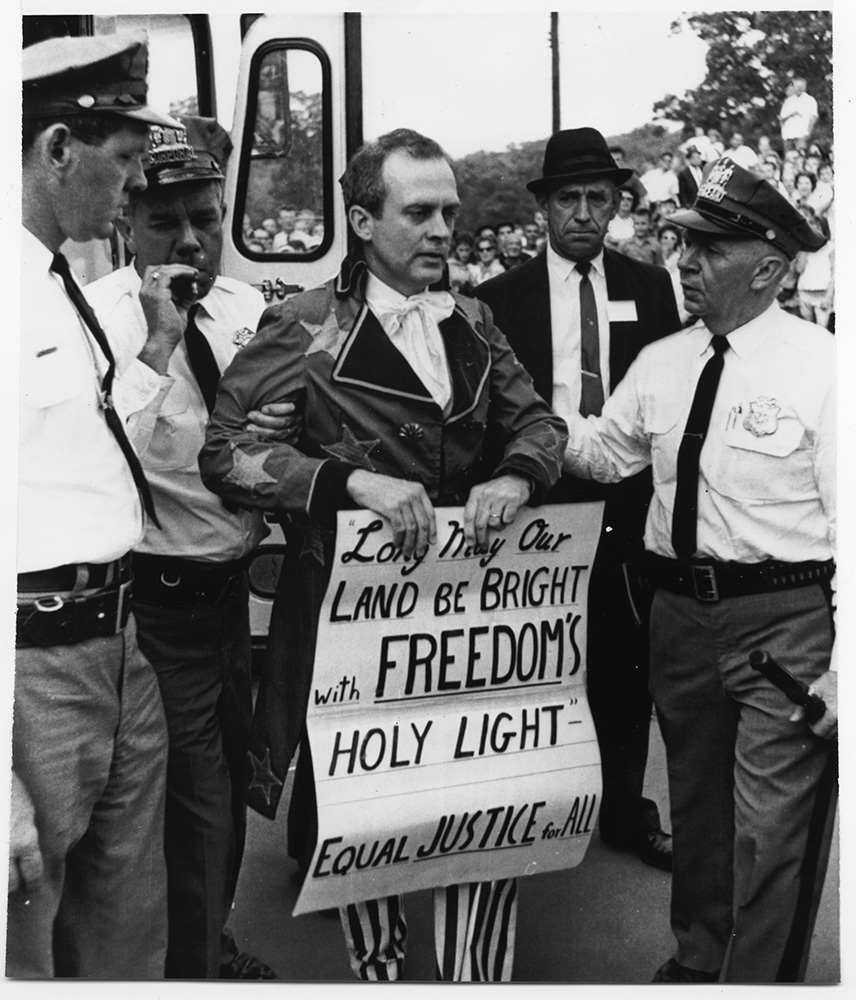 The Rev. David Andrews, assistant chaplain at Morgan State College, is shown being taken into custody by police while protesting at Gwynn Oak Amusement Park, near Baltimore, in 1963. Protestant, Catholic and Jewish clergymen have been among some 300 people arrested in a series of efforts to integrate the privately owned amusement park. In one of the anti-segregation demonstrations outside the park, Andrews donned a red, white and blue “Uncle Sam” outfit to symbolize the fight for racial equality. He was arrested on trespassing charges. RNS archive photo. Photo courtesy of the Presbyterian Historical Society 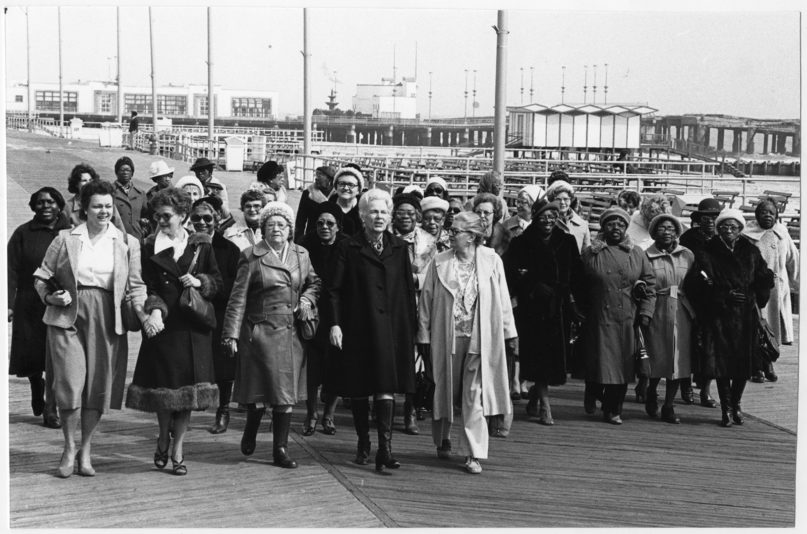 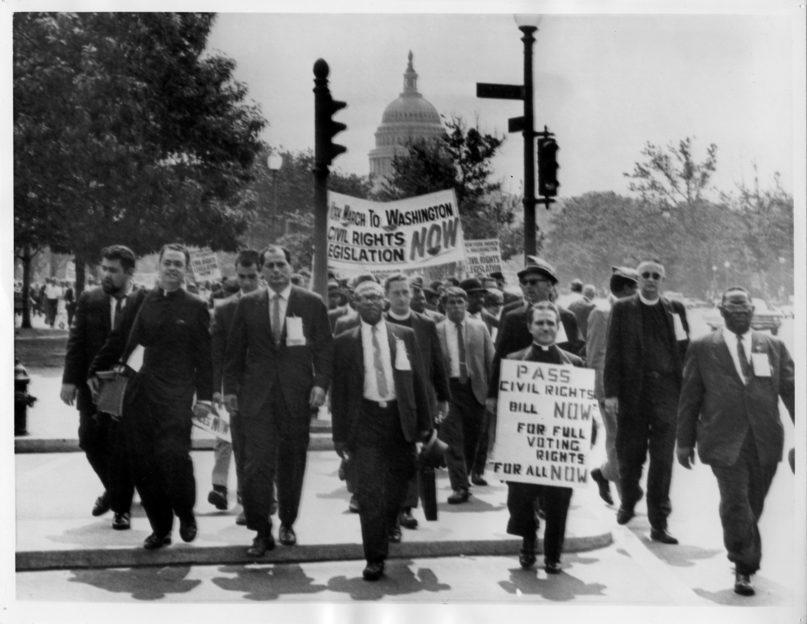 Religious, labor and civil rights leaders from New York City came to the nation’s capital for a 1963 March on Washington to urge early passage of the civil rights bill without “crippling amendments.” Some of the 1,200 marchers are shown arriving at Union Station. RNS archive photo. Photo courtesy of the Presbyterian Historical Society (Editor’s note: These photos and more can be found in the RNS archives at the Presbyterian Historical Society. Special thanks to Allison Davis of the PHS for help in assembling this collection.)