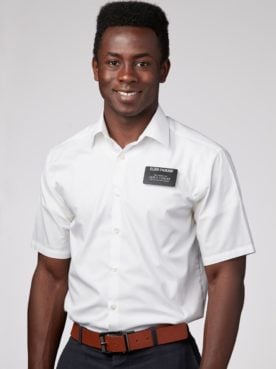 Under the new guidelines of the Church of Jesus Christ of Latter-day Saints, some male missionaries may be authorized to wear blue dress shirts or no necktie. © 2020 by Intellectual Reserve, Inc. All rights reserved.

In a world that has gradually degenerated into the murky arena of “business casual,” you could always rely on Mormon missionaries to hold the line: white dress shirts, carefully knotted neckties, and, often, a full-on suit or sport coat.

As of today, there are some welcome chinks in that armor. The Church of Jesus Christ of Latter-day Saints has just announced “exceptions to the dress standards for young men serving as missionaries.”

It makes me smile that before getting to the exceptions, the church’s announcement is prefaced with the phrase “the standard missionary attire is reemphasized, which includes a white shirt and tie and, in some areas, a suit coat.”

In other words, “DON’T GO CRAZY WITH THIS NEWS, PEOPLE, BUT . . . some of our missionaries serving in designated areas may be able to get by with a blue dress shirt instead of a white one, and even — gasp! — no tie.”

And then it follows up that shocker by reiterating this this is going to be the exception, not the rule. Missionaries can’t just up and decide for themselves which uniform they prefer. That would be a one-way ticket to Chaosville.

Instead, “These exceptions will be determined by Area Presidencies, and missionaries will be notified by their mission president if these exceptions apply to their teaching area.” 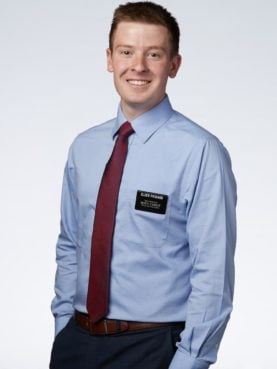 Under the new guidelines of the Church of Jesus Christ of Latter-day Saints, some male missionaries may be authorized to wear blue dress shirts or no necktie. © 2020 by Intellectual Reserve, Inc. All rights reserved.

So, it’s a restatement of the status quo, which is followed by a very limited and tentative acknowledgment that the status quo may change in some places, which is in turn followed by a declaration that the status quo will still apply in the most religious settings of a missionary’s life. Even in places where some elders will be able to wear blue shirts and — gasp again! — no tie when teaching prospective converts, they will still don the iconic white-shirt-and-tie ensemble at “the temple, Sunday worship services, leadership and zone conferences, missionary training centers, baptismal services and other church meetings.”

As changes go, this feels like it’s somewhere like a 2 on the scale of 1 to 10. But then again, I’m not a guy. When the Church announced changes to women missionaries’ dress standards in late 2018, including the ability for more women to wear pants in certain situations, that felt more dramatic.

On the other hand, maybe blue shirts will prove to be a game-changer, a tipping point of cultural transformation for Latter-day Saints. If clothes make the man, then the message sent by a slightly more casually dressed missionary is important.

Maybe in this tiny way, the culture is going from “We revere business success and corporate uniformity! We are Mad Men, only without the sex and the lying!” to “We are approachable and comfortable, or at least more comfortable than we used to be. And safe. But still very American-looking. That’s us. Would you like to hear about the Book of Mormon?”

Related: Mormon women missionaries can now wear pants! But not to church.