BRONX, N.Y. (RNS) — On a sunny spring afternoon, a dozen men stand around a cornhole game. The excitement is palpable. On a video of the event, they are laughing, screaming and high-fiving each other while a loudspeaker projects the voice of the organizer. The video slows down to enjoy the gripping moment when the bean bag-like object enters the goal.

All the makings of a typical yard party.

But upon closer look, this party consists of two very different populations: Franciscan friars, in their traditional gray habits, and homeless men.

The video was shot in mid-April by one of the missionaries at the Saint Anthony Shelter for Renewal on East 156th Street in the South Bronx. The game takes place in the courtyard area of a complex that was once a Catholic school. It has been transformed to host two friaries (St. Crispin and Our Lady of the Angels), a homeless shelter, a youth center and an auditorium. During normal times, the friars and guests live in community with each other, but the COVID-induced quarantine has intertwined their lives more than ever.

The friars have chosen to be close to the men they serve, in effect quarantine with them until the danger passes. While they share meals, prayers and recreation, they do their best to maintain social distancing rules. In the process, they have become a community.

“It’s been a challenge for them and for us, but there is a feeling that we are all in this together,” said Father John-Mary, one of the friars.

The Saint Anthony shelter is part of the Franciscan Friars of the Renewal, a community that was founded in the Bronx in 1987, with the values of poverty, chastity and obedience. 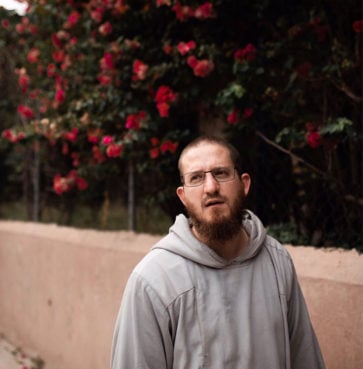 Father Mark-Mary has been in the Franciscan Friars of the Renewal community for 11 years in the South Bronx. Photo by Michael Kearney

“We live things a little more intentionally or intensely,” said another member of the friary, Father Mark-Mary. The 15 friars at Saint Anthony have all committed themselves to a life of poverty, living in the hardest neighborhoods, begging for food and depending on donations for survival. They have no personal bank accounts, little technology and devote themselves to serving the poorest. If a neighborhood gets “too nice,” the friars move on to a more impoverished community, according to Mark-Mary.

“The Gospel tells us to take care of our neighbor,” said John-Mary, adding that he believes in the approach of, “Give them a sandwich, not just a blessing.”

Father Mark-Mary, has been with the community for 11 years, and although he lives in the other friary, Our Lady of the Angels, he has now come to help out at the shelter. Mark-Mary is usually in charge of a youth program, teaching catechism to children of the neighborhood, but since the pandemic started, the complex closed its door to the outside, and the classes transitioned to Zoom. Now, he works one day a week at the shelter.

His interest for the Franciscan order came in a rather unexpected way. One night as a teenager in Orange County, California, where he grew up, Mark-Mary said he was eating at In’n’out Burger, a classic fast-food chain in California, when a young man approached him and started talking about this unusual lifestyle. He was talking about “hard-core Franciscans who sleep on the ground,” said Mark-Mary, and his interest was piqued. Fresh out of college, Father Mark-Mary came to join the friary.

Joining the order is a serious process. Over months, the applicants get familiar with the friar’s lifestyle and are even required to take a psychological exam to make sure they can take on a life of penitence and service. 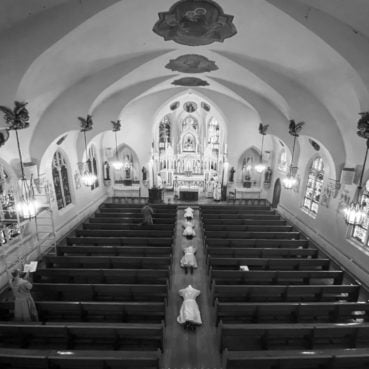 Friars participate in an Ordination Mass with restricted attendance due to the coronavirus in the South Bronx. Photo courtesy of The Community of the Franciscan Friars of the Renewal

After 10 months of study and service, postulants are allowed to leave or go on to Noveciate, during which they begin wearing the habit and choose a religious name. After four years, they take final vows; then, if the new Friar wants to become a priest, he must study for another four years at seminary, after which he can be ordained.

This strict life is often very different from the one their guests live. The friars pray together four to five hours a day, according to Father Mark-Mary, and most of their remaining time is spent serving at the shelter, the food bank or the youth program. There is not much time for leisure, and the commitment is complete and life-long.

Before the quarantine, Jorge, one of the guests at the shelter, would spend his days walking around the neighborhood, taking the subway downtown, drinking coffee and sometimes watching a movie in the park. Some guests spent their days at the library, where they could watch movies on their phones or play chess together. Others would go to work or look for a job or apartment. Some had social worker meetings and programs.

Every night, Jorge would take the mandatory breathalyzer and drop his belongings in box 23. These were things like food and pills — and his phone — that were not allowed in his room. The men’s belongings are often searched for drugs, alcohol, cigarettes and any “risqué publications,” all forbidden, according to John-Mary. Brother Patrick explained that “it is a Catholic environment, guests are immersed in the norms of the community,” although they do not have to be Catholic to be offered a room.

Jorge would then have dinner and activities with the men and retreat to his room. At 9 p.m., the lights would go off and come back on at 5:30 a.m. the next day. Jorge said he is not a morning person, and having to do all his chores, shower, eat breakfast and be out the door by 6:45 was always a struggle.

These different lifestyles often clashed. “I don’t like my freedom taken away from me,” said Jorge with a laugh, adding that he is very grateful the friars offered him a place to stay and that “they are very strict, but there is a reason why (…) I’ve never heard of a shelter like that.” Brother Michael Kearney, right, drives Jorge to an appointment, one of the few allowed outings during the pandemic, in South Bronx, New York. Jorge was one of the guests at the Saint Anthony Shelter for Renewal. Video screengrab

But now everything has changed. Having the men stay in around the clock while maintaining social distancing rules has been a challenge. The guests have to eat in shifts to avoid everyone being in the same room at the same time, they wear masks, and most importantly, are not allowed out of the complex.

Some rules have changed during the quarantine; now the men are allowed to have their phones during the day and smoke in the little garden outside the shelter. To occupy the guests, socially distanced movie nights are organized every other day, where they watch “family-friendly movies” found on Pureflix, a Christian version of Netflix.

The friars even buy guests cigarettes, but only three or four are allowed a day. Jorge, who has now left the shelter to live with his mother, laughs: “I’ve already smoked three since we started talking!”

The shelter structures and discipline were good for him, Jorge thinks, but he also struggled with the added control exerted on him during the quarantine. He was only able to get out once a week for his medical visit, driven by one of the friars. Before leaving the complex, he had to explain why his appointment was necessary and let one of the friars speak with his doctor. “I didn’t sign up for that,” said Jorge. He was uncomfortable with his doctors learning that he was homeless.

But Jorge’s spot at the shelter was not easy to get, and he was willing to sacrifice some liberty in order to be part of this special community. When the quarantine started, he had already been there for five months.

After he was fired from his job as a cook, Jorge packed his belongings in a big bag and left his Bronx apartment where he had been living for the past 12 years. He headed to 14th street and spent a week sleeping in a park, in the subway or on a makeshift bed in front of the Salvation Army.

“I had never been in this environment, I had never been homeless before,” he said. A man told him about the St. Anthony Shelter — there might be a free bed now, he said. Jorge trekked to the Bronx to try.

Jorge had come five days in a row around 5 a.m.; he wanted to be first in line in case a bed opened up. The fifth day, there was an opening, and after a negative breathalyzer, he was admitted. In the meantime, he heard that his friend who told him about St. Anthony died of an overdose. “He was a good guy,” said Jorge, who himself had been clean for three months at that point. “I know what addiction does,” he added. “I get high in my head and I end up alone, miserable, broke and unhappy.”

The shelter provided solace from these problems, he said, and a place to reconnect with his Catholic upbringing. Brother Michael Kearney takes a self-portrait while quarantining for two weeks, after showing coronavirus symptoms, at the Community of the Franciscan Friars of the Renewal in the South Bronx, in April 2020. Photo by Michael Kearney

Despite their best efforts to avoid any outside interaction, COVID did not spare the friary. Michael Kearney, 23, a missionary, had to quarantine in his room for two weeks after he showed mild symptoms. Kearney said that the biography of Mother Theresa and the tomato soup and grilled cheese prepared by Jimmy, the cook, got him through. He said he also read The New York Times and watched a lot of Terrence Malick movies.

Five friars had the virus, including Father Luis, the head of the shelter whom Jorge describes as “the rock.” Two missionaries also showed symptoms. The sixth floor of the friary was converted into a makeshift quarantine zone where the men isolated and were brought meals three times a day.

Despite the pandemic, the friars have kept a hopeful attitude. Father Mark-Mary cited the long tradition of Franciscans serving and dying during plagues. “We have given our life to suffer with those who are sick and vulnerable.”

For his part, Jorge said he misses the friary and attending mass with the friars but is enjoying the new-found freedom he has to walk around the neighborhood everyday. He has found a subsidized apartment and looks forward to moving in when the quarantine ends.

“I have been blessed,” said Jorge, adding that his time at the shelter strengthened his Catholic faith. “I speak to God on a normal basis, like he was a normal person.”

News
Religious organizations prepare for ‘potential onslaught’ of evictions
Follow us on Facebook!
Submit your photos to RNS