“The COVID-19 pandemic leads us to further experience the socioeconomic, ecological and ethical crisis that we are living as the right moment to stimulate conversation and make concrete and urgent decisions,” said Archbishop Paul Gallagher, the Vatican’s equivalent of the minister for foreign affairs, during a news conference at the Vatican.

The new document, “Journey for the Care of the Common Home,” sets guidelines for Catholic dioceses, parishes, missions and movements around the globe and states its goal to address “this historical moment marked by urgent challenges, but also very stimulating in order to create a new civilization.”

The news conference was the first to take place since the rise of the pandemic in Italy in early March.

While the pandemic monopolized global attention, the current environmental crisis remained a fixture of Pope Francis’ message. The Vatican has begun implementing regulations within its walls to reduce emissions and waste and promote sustainability.

The 57-acre area of the Vatican gardens has eliminated the use of pesticides, and neon lighting now illuminates St. Peter’s Square and Basilica, said Bishop Fernando Vérgez Alzaga, the secretary-general of the Governorate of Vatican City State.

The Vatican also announced its intention to take part in the Kigali Amendment to the Montreal Accord, which aims to reduce the emission of gases responsible for the weakening of the ozone layer.

The Trump administration announced that the United States will be exiting the 2015 Paris Agreements on climate change and migration in November, becoming one of a handful of countries not participating. President Donald Trump explained the move by stating that the accords would permanently “undermine the economy” of the United States.

Though Gallagher acknowledged that the U.S. engagement in the Paris accords “is of vital importance for the future of the environment,” he also said its importance is relativized by the leading role played by nonstate actors. 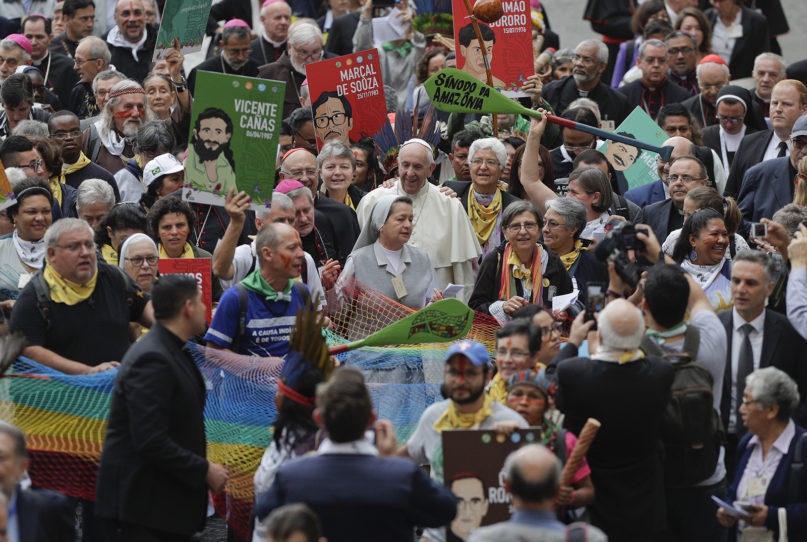 Pope Francis walks in a procession on the occasion of the Amazon synod, at the Vatican, on Oct. 7, 2019. Francis opened a three-week meeting on preserving the rainforest and ministering to its native people as he fended off attacks from conservatives who are opposed to his ecological agenda. (AP Photo/Andrew Medichini)

“We know that there are many organizations, many states within the United States that have committed themselves to continuing with the Paris Agreement,” the Vatican official said, adding that the world is witnessing “an irresistible social movement.”

“I think that humanity will not be blown off course by any decisions by anybody,” he said. “But obviously we welcome anyone coming back to the table.”

Drawing from the profound transformations introduced by the pandemic, the newly released Vatican document imagines an opportunity to change the relationship between humanity and the environment.

The first section focuses on promoting change and education among families and the young. As young people around the world raise their voices for the benefit of the planet, the Vatican hopes they will find inspiration and guidance in Francis’ words.

“With the potential of digital communication, Laudato Si could become a reference point for a global environmental care movement, through which young people of different religions and non-believers can identify themselves and express their desire for change in new ways,” the document reads.

From promoting environmental studies in school and universities to encouraging interdisciplinary efforts and activities, the new document offers an ambitious plan to encourage sustainability in Catholic education programs throughout the world.

It also encourages Catholics to “identify and combat” the big world actors who are responsible for deforestation, pollution and inhumane food production processes. To do so, the document promises to “give a voice to the voiceless,” as shown during the 2019 synod on the Amazon region, which saw the participation and involvement of indigenous people who have suffered due to industrial development.

“The current financial system is unsustainable, and it requires many things be reconsidered,” the document reads, reinforcing the need for a circular economy that “takes ecological concerns into account.”

The document also refers to the need to “develop the concept of sin against human life among young generations,” especially when it comes to “abortion, euthanasia, suicide.”

It also advocates for “severe sanctions against financial institutions that are involved in illegal operations that promote tax evasion” and for the closure of “tax havens,  to avoid the tax evasions and money laundering that rob society” and “end up suffocating and impeding local production.”

Recent news reports detail the financial scandals at the Vatican concerning a controversial real estate deal in London. In the past month, Pope Francis has enacted reforms aimed at promoting transparency and anti-corruption measures within the Vatican’s troubled finances.