(RNS) — From the death in mid-March of Breonna Taylor, a young black emergency medical technician who was killed in her apartment by police, to last week’s shooting of Rayshard Brooks in Atlanta, with weeks of demonstrations over the killing of George Floyd in Minneapolis in between, white people have suddenly been confronted with racial injustice in a way that even veterans of the civil rights fight say seems different.

As part of the Religion and Public Life program at Rice University, which we lead, we convene diverse religious and civic leaders to study how religion can build common ground for the common good. Lately, many of those who lead largely white churches have been asking us what they can do.

It’s a question that we approach humbly. We are scholars, not activists, and we are two white people living in the U.S., with all the associated privileges that implies, who are aware that these realities are painfully familiar to many black Americans. As Floyd’s brother Philonise Floyd testified to Congress: “I’m tired of the pain I’m feeling now and I’m tired of the pain I feel every time another black person is killed for no reason. I’m here today to ask you to make it stop. Stop the pain. Stop us from being tired.”

RELATED: How white spirituality, religious or not, allows racism to grow

In this moment, what can largely white churches be doing to address systemic racism?

Acknowledge each loss. Behind the names George Floyd, Breonna Taylor, Ahmaud Arbery and Rayshard Brooks there are families, loved ones and whole communities who are grieving. Floyd’s death hits particularly close to home for us, since he was from Houston and involved in ministry work in the Third Ward. Floyd’s pastor and friends recently recounted the many ways that he lovingly cared for and served his community.  This level of pain and collective loss deserves our acknowledgment.

Acknowledge the reality of collective trauma. In the past weeks, black Americans have publicly expressed grief, fatigue and righteous anger. Indeed, words cannot adequately capture the anguish that black communities are experiencing right now. This pain and fear is not only individual, but social.

While linked to systemic patterns of discrimination themselves, the deaths of Floyd, Taylor, Arbery and Brooks also occurred against the backdrop of the COVID-19 pandemic, which has disproportionately impacted African Americans, who have died at much higher rates than other Americans. Black-owned businesses are also more likely to be suffering financially. 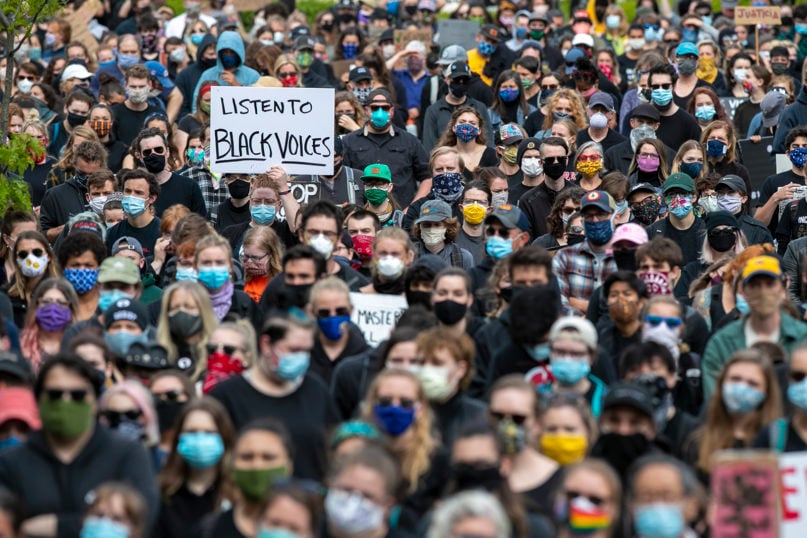 Many faith leaders are also asking what they can do to stand with those who are suffering. Still others see a need to publicly take responsibility for how Christianity has been used to justify racism, past and present. Houston’s own popular Christian author Beth Moore recently wrote to her nearly million followers on Twitter: “I think we are experiencing a divine reckoning in America. I don’t think the reckoning is over our having simply sinned. I think it’s over the fact that we have used God & the Bible to do it.”

Participate in structural change. Racism and anti-blackness have been shown by social science to be part of the very fabric of our organizations, including religious communities. Being part of the problem means we can be part of the solution. For far too long, Nashville author Margaret Renkl writes, white Christians have ignored the racial sins of our spiritual ancestors, while allowing a culture of “casual brutality” toward black bodies to persist.

Here are a few ideas of how white faith communities can work for long-term change:

White faith communities can seek to hold elected officials and other institutional leaders accountable for their harmful policies and actions. More than 60,000 people have demanded justice for Floyd in demonstrations in Houston, but many questions remain unanswered about how Houston’s police department treats black citizens, including protesters. Similar dynamics are playing out in towns and cities across the country.

White faith communities can commit to learning about systemic racism closer to home and, armed with new knowledge, can financially commit to support racial equity. In February, the Episcopal Diocese of Texas launched a fund that “aims to repair and commence racial healing for individuals and communities directly injured” by racial injustice, designating funds to support historically black seminaries, colleges, universities and churches.

RELATED: Raise your signs and voices. Then raise your church’s race awareness.

While not every church has access to large sums of money, the pooling of small contributions in a mutual aid fund, such as this one providing COVID-19 aid to black communities, can add up.

We know that many in white religious communities want change. Our hope is that their concern will move beyond symbolic statements, translating to concrete changes that show through our actions that black lives matter. Our faith traditions affirm the value of human life, the need to walk with humility and the importance of seeking justice and equality, which can guide our actions.

We can also learn from those around us. For centuries, black faith communities have been centering the dignity and value of black life, and they have confronted the damaging impact of racial injustice. More recently, black activists are imagining new ways to foreground black dignity in an often hostile world. Their witness is a witness to us all. 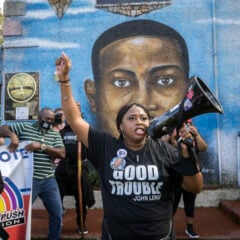