(RNS) — Houston, we have a problem, and it’s called white spirituality.

Listen, I know how that’s making you feel right now. Nerves are on edge and emotions are heavy and you’re wondering if this collective grief is going to last forever. But we’ve got to have a little chat, because systemic racism is a complex thing, and until we look at every dirty little corner, we’re not going to be able to clean house.

White spirituality is a problem, and the problem is making us miss the point of spirituality. So get out the broom and the dust pan, and let’s get started.

I spent years in evangelical Christianity, and though I still consider myself a follower of Jesus, my faith is far more expansive and pluralistic than it once was. As a curious mystic, I have delved into other realms and other religions in search of that sneakiest of things called Truth, and on my journeying I have found something disturbing: White people love to use our spirituality to ignore the very real plight of the BIPOC (Black, Indigenous, People of Color) community.

To be honest, if it wasn’t for my recent forays into the study of race and specifically whiteness, I probably wouldn’t have noticed this subtle gaslighting that both the Christian and the New Age worlds perform against our Black and brown siblings. It’s encased in the lexicon of religiosity, God, and the superiority of all things spiritual.

But if there is one thing that I got out of seminary, and specifically from being exposed to Black liberation and womanist theologies, it is that white spirituality tends not to concern our human bodies. This is not a very useful theology when it comes to actual justice.

Lightworkers and prophets know that we are liminal people — we walk in the space between spirit and earth realms. We are in the world but not of the world. But this doesn’t mean we get to ignore the world. Instead we get to bring the Holy Spirit into the world in order to make the world a better place.

That means that like Jesus we get to be blood and guts about our spirituality. We get to get our hands dirty with the love of God and humanity, to place our palms on the wounds of the world, both literally and energetically, and call down the angelic realms — or the Reiki masters or healing grace or crystal light — and heal it. We get to heal the world.

People raise their hands in praise while singing in church. Photo by Carolina Jacomin/Unsplash/Creative Commons

That means we have to see the world and have to give voice to our grief and lament and our rage. We need to use the safety of our privilege to let the air finally fill with justice once and for all. We need to promote a unity that actually includes everyone, in which everyone’s need for freedom and justice and liberty are actually being met.

Too often, talk of actual justice in white spiritual circles is hushed for the sake of unity or good vibrations. In Christian circles, this looks like white niceness, like not being “divisive,” like promoting unity above justice (where unity = silence). This looks like pastors not preaching about racial injustice because they want to avoid controversy, except really they are afraid of losing white tithers.

This looks like churches who send their people on missions trips, returning with plenty of Instagram-worthy pictures of themselves surrounded by little Black faces, while doing nothing to actually change the systems of injustice that keep the food out of those kids’ bellies. It looks like white churches using beautiful Black faces on the cover of our church brochures so we can mark off the diversity check box, but when a Black man’s body lies bloody in the street because of white supremacy or police brutality, the white pulpit is silent.

It’s not just Christians who are to blame here. I’ve seen plenty of those who count themselves in the “spiritual but not religious” camp use “vibrational ascension” as a reason to not engage with the realities of racism and our own privilege. I’m all about good vibrations. I’m all for ascending vibrationally, and yes — I do pay attention to this personally. And yes, the realities of racism and injustice are heavy.

But if I just walk around ignoring the ways that my earth siblings are suffering, there’s some serious karma that’s gonna bite me in the nether regions. I’m not interested in ascending if it means leaving the world and all its people behind in a chaotic mess of injustice and suffering, thank you very much.

Regardless of our theologies regarding how we got here, if we walk around in bodies assigned a white identity, we need to think long and hard about what God wants us to do about it. Do we think the purpose of our whiteness is simply so we could be comfy cozy in privilege? Or is it possible that God placed us in white bodies because our soul needed to learn a lesson or two about justice, about blind spots, about our own capacity for evil?

We need to ensure the safety of all bodies and to recognize that our ability to focus on our personal vibrations and our church’s unity and our private meditation practice and our missional tourism is all rooted in privilege. As we each rush toward the finitude of our time on this earthly realm, whether we think we will be diving through some pearly gates or having some sort of eternal quantum experience, we need to be asking ourselves about the legacy we are leaving behind. 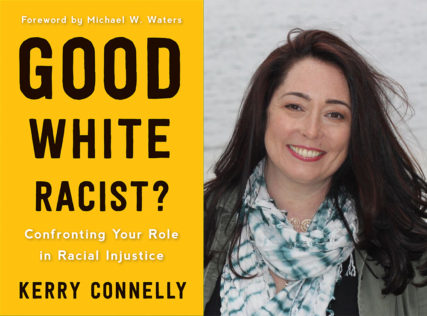 I want my legacy to speak of justice, of peace making (not peace keeping), and of a radical love that insisted on a spirituality that challenged white people to do better.

(Kerry Connelly is host of the podcast White on White and the author of “Good White Racist? Confronting Your Role in Racial Injustice.” A version of this article first appeared on her blog at kerryconnelly.com. The views expressed in this commentary do not necessarily reflect those of Religion News Service.) 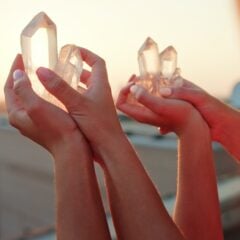 Alternative Faiths
What’s behind the enduring popularity of crystals?
Follow us on Facebook!
Submit your photos to RNS