LOS ANGELES (RNS) — No cars can get through the traffic light at Colorado Boulevard and Fair Oaks Avenue in old Pasadena this afternoon because a handful of black Americans, led by a preteen named Sebastian, are dancing to “Wobble” in the middle of the intersection. They’re surrounded by hundreds of non-black protesters, holding signs that say things like “Get your knee off my neck,” “Breonna Taylor” and “Black Lives Matter.”

I’m in the center of this dance circle, beside a leader of Black Lives Matter Pasadena, trying to keep up with the line dance: I know all the steps, but I’m not in my 20s anymore; it’s hot, and I’m winded from the march we took from City Hall to get here. As I pause to catch my breath, it occurs to me that the formation blocking the intersection may represent the solution for racial violence so many around the world are seeking right now.

White people and people of color stand on the perimeter, disrupting the flow of business-as-usual and acting as a barrier to police violence so that the black people in the center can experience, even briefly, joy.

No white people were asking us for anti-racist learning resources or trying to absolve themselves of white guilt by apologizing to us on behalf of all white people, giving us advice on what strategies for protest would most appeal to their racist family members. A former mentor of mine, a professor of black studies, once told me that what is required for black liberation is for non-black people to “get out of the way” of our joy and — I’ve added — in the way of anti-black violence.

This model somewhat resembles Jesus’ miracle of turning water into wine at the wedding in Cana. “My hour has not yet come,” Jesus tells his mother when she reports that the wine, a symbol (and source) of joy, has run out at the reception they are attending. In shifting the conversation from the shortage of booze to timing, Jesus invoked the predictions of the Hebrew prophets who preceded him about some joyous future time when God would make right all that is wrong in the world. His predecessors believed that in that future time, in the words of the 8th century B.C. prophet Amos, “the mountains shall drip wine and all the hills shall flow with it.”

In other words, in that day when God ends all the “isms” and phobias that organize human civilization, the wine will never run out. Jesus was telling Mary that the time for endless wine hadn’t come, but then he provides bottomless wine for the party anyway, turning almost 1,000 gallons of water to alcohol. In doing so, he gives the party attendants a taste of the future time in the present.

In theological language, we’d describe what Jesus performed at that wedding as a prolepsis: He invited them to partake of the world to come in the world that is. In social movement language, we call this “prefigurative” action, where people seek to create a tiny microcosm of the world that ought to be in the middle of the world as we know it: like the protest camps from the Occupy movement, with their communal libraries, non-hierarchical leadership and cooperative economics. Like the endless wine of some future time, our joy filled the streets of Pasadena that day.

When I called myself an evangelical Christian, I believed that the church was supposed to be like the space held by Black Lives Matter on Colorado Boulevard. But my loved ones in that tradition would prove to me that they had no interest in being a prolepsis of that future age when we’ll find anti-blackness only in museums.

I was told by former classmates, mentors and friends in the evangelical world — most of them white — that my advocacy for black lives was hateful, heretical and a distraction for Christians. One former classmate, now a senior pastor, looked me in the face and told me, straight up, “racism is not a priority to God.” He was one of many telling me that God would not come to the aid of black people in our fight against racism.

For a moment, God died for me. I considered that perhaps all of these white evangelicals were telling the truth. Perhaps their God didn’t care about saving black people from the routine violence of an anti-black society.

When I scanned the history of white Christians weaponizing their faith to steal land, slaughter indigenous peoples and enslave millions of Africans to build the wealth of their “Christian” nations, it seemed to support what the white evangelical world had been saying in one way or another. And I conceded the point that black lives don’t matter to God because God is not real; white people made him up to enrich themselves.

I gave up looking for God to intervene for black people, as the Bible once seemed to promise, and began looking to great freedom fighters of the past for some viable strategy to fight social oppression.

But as I read through the likes of Gandhi, Tolstoy, Martin Luther King and more recent experts in social movements like Erica Chenoweth, Jonathan Smucker and Micah White, I kept bumping into God. Whether I believed or not, God was present in the work of people who’d done far more freedom fighting than I. This fact challenged my assumption that spirituality had no place in changing the material conditions of the oppressed. It was my studies in nonviolent struggle that dragged me kicking and screaming back out of atheism.

Christianity is now a trigger for me, and going back to church is off the table. But the feeling in those all-night prayer gatherings and youth conferences and altar calls — that feeling we called God — finds me wherever two or more are gathered in the streets to fight for justice.

When we broke our hold on that Pasadena intersection, we began marching to the city’s redlined district, stopping at sites where the deaths of unarmed black people such as Kendrec McDade and J.R. Thomas have rendered the ground holy. At one point our chants were overheard by the mother of Darius Smith, the high school student who was killed by an off-duty customs agent in Arcadia, California, in 2017. She happened to be in a nearby grocery store. She spoke to us about how the murder of her son changed her life. There were grunts and shouts of agreement from our street congregation. It was a testimony service.

As our processional continued, people came to their doors and their terraces to wave or raise their fists in support. “Out of your homes! Into the streets,” we chanted to them with smiles and waves of our own. Some of them accepted the invitation. 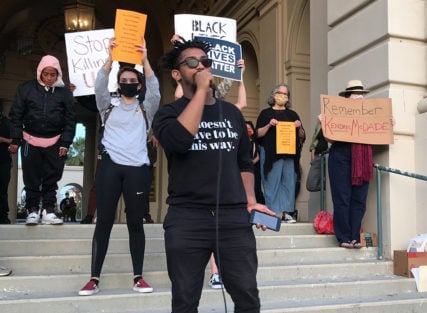 Artist and organizer Andre Henry addresses the crowds at the gathering in memory of George Floyd and supporting Black Lives Matter in Pasadena, California, Sunday, May 31, 2020. RNS photo by Alejandra Molina

For a moment, I was taken back to those days when I led congregations in singing at church. My stomach tightened, as well as my throat, as I realized this is the song those churches I left refused to sing. This protest pilgrimage was the church I’d been looking for but never found in evangelicalism, the congregation willing to fill the streets, at the risk of persecution, with this gospel: Black lives matter.