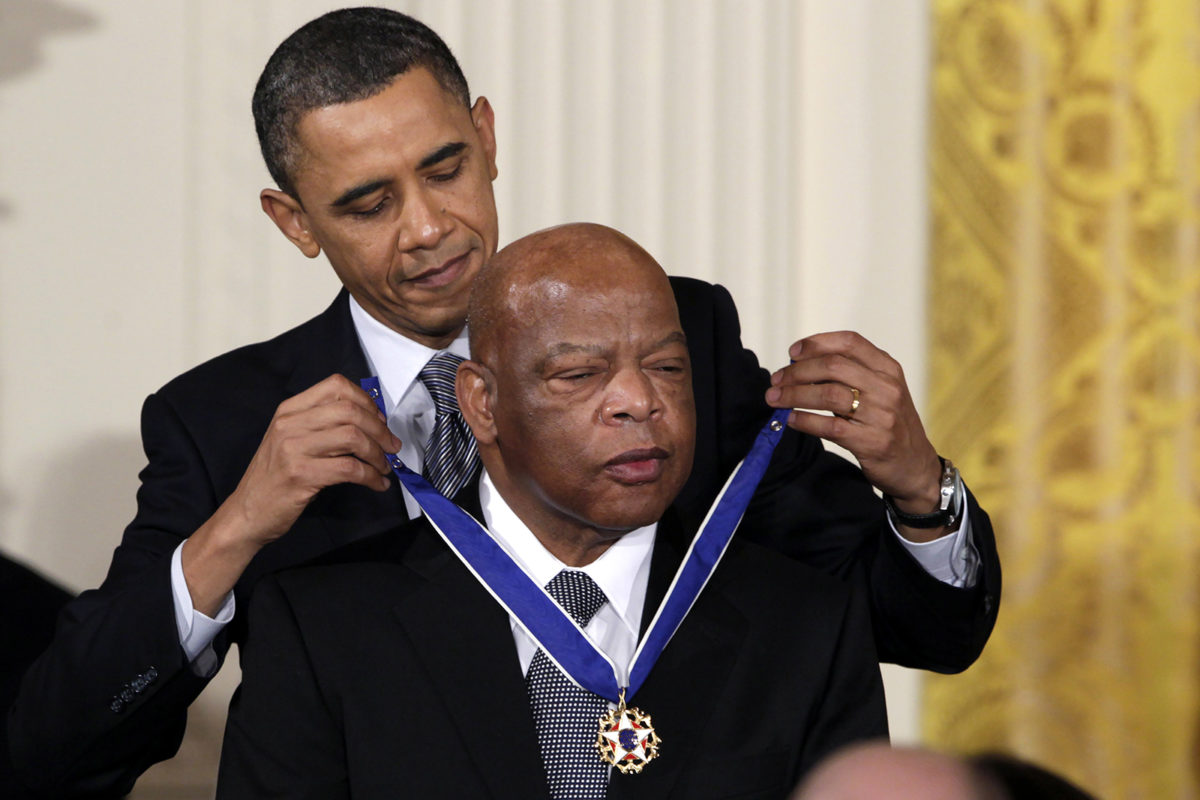 In this Feb. 15, 2011, file photo, President Barack Obama presents a 2010 Presidential Medal of Freedom to U.S. Rep. John Lewis, D-Georgia, during a ceremony in the East Room of the White House in Washington. Lewis, who carried the struggle against racial discrimination from Southern battlegrounds of the 1960s to the halls of Congress, died July 17, 2020. (AP Photo/Carolyn Kaster, File)
July 27, 2020
Jeffrey Salkin

(RNS) — As the eulogies for U.S. Rep. John Lewis continue to roll in, and now that his body has made its final journey across the Edmund Pettus Bridge and reposes in the Capitol rotunda, let me briefly add my own small remembrance.

In 2003, I was serving as a rabbi of The Temple in Atlanta. Early into my tenure at that congregation, I realized that there was a problem.

The problem came in the form of a local Black congresswoman, Cynthia McKinney, who had earned a reputation for certain outrageous statements, including her opposition to aid to Israel and support for the Palestinian cause. To make matters worse, her father had alleged that “Jews have bought everybody. Jews. J-E-W-S.”

Atlanta enjoyed a reputation for wonderful relationships between Jewish leaders and black leaders — a relationship that went back at least as far as the Rev. Martin Luther King Jr.’s friendship with Rabbi Jacob Rothschild of The Temple. That relationship was nurtured by various organizations, including the American Jewish Committee. For years, The Temple and the AJC had co-sponsored a Black-Jewish Passover seder. We were all justifiably proud of the work that we had done.

I realized that Rep. McKinney’s outrageous behaviors threatened to weaken the fabric of Black-Jewish relationships in our city. I poured out my heart to Sherry Frank, one of Atlanta’s greatest leaders and former director of the local AJC. She suggested that I call a meeting of Jewish and Black leaders to talk about it. I was skeptical; who am I to invite people to a meeting? Who would come?

The invitation went out. A few days later, I found myself sitting with various local Jewish leaders, fellow rabbis, synagogue presidents and Black leaders, including former Atlanta Mayor, Congressman and U.S. Ambassador to the United Nations Andrew Young — and Lewis.

We had a frank conversation. We were all dedicated to the idea that McKinney’s statements, and those of her father, would not become an issue in local Black-Jewish relationships. We talked; we strategized; we shared our concerns. 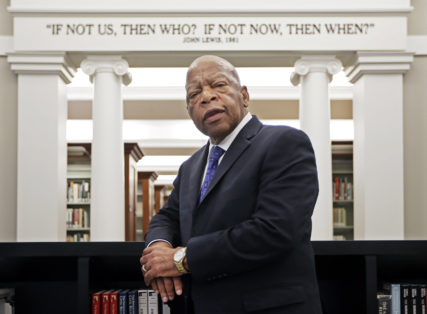 In this Nov. 18, 2016, file photo, U.S. Rep. John Lewis, D-Georgia, poses for a photograph under a quote of his that is displayed in the Civil Rights Room in the Nashville Public Library in Nashville, Tennessee. (AP Photo/Mark Humphrey, File)

I had never really been politically active; it has never been my strong suit. But I was blown away by the fact that these icons — Andrew Young and John Lewis — would have actually made the time to meet in a rabbi’s office. It was a total surprise to me, and a sweet introduction to Atlanta.

As I was escorting Lewis out of the building, I thanked him profusely for coming to the meeting. He responded by saying that the relationship between Blacks and Jews was precious to him.

There would be other encounters with him over the years — each one cordial, warm and memorable. After our meeting, Lewis formed a Jewish “kitchen cabinet,” for precisely the purpose of monitoring the delicate and redemptive relationship between our two communities.

I offer this small, personal vignette — not only in memory of one of the greatest figures in the United States, a man who bore his own personal wounds in the struggle for civil rights, and who transformed that pain into redemption.

I offer this vignette because of a heartbreaking and perplexing irony.

To which we might say: ho hum. Nothing to see here.

Beyond that, here is the irony: Even as we Jews have joined others in mourning for Lewis, there has been a perplexing rash of anti-Semitic statements from Black celebrities.

DeSean Jackson of the Philadelphia Eagles made anti-Semitic social media posts — and subsequently apologized. Zach Banner of the Pittsburgh Steelers had come to the defense of the Jewish community.

To his credit, Cannon agreed to meet with Rabbi Abraham Cooper of the Simon Wiesenthal Center, leading to conversations that have raised Cannon’s consciousness.

This led rapper Jay Electronica to accuse Cooper of being the devil and allege that Black people were the “TRUE Children of Israel.”

NBA legend Kareem Abdul-Jabbar criticized this current trend — mincing no words in criticizing these anti-Semitic trends in current culture — which led Ice Cube to accuse Kareem of accepting “30 pieces of silver” as a bribe.

There are two ways to interpret these most recent vocalizations of anti-Semitism.

First, to find them disturbing. That is certainly my temptation. When role models and heroes make such statements, they go, well, viral.

There was a time when Jews would counter such manifestations of anti-Semitism by recalling the Jewish involvement in the civil rights struggles of the 1960s. We would regularly cite Rabbi Abraham Joshua Heschel’s remark when he marched in Selma — “I felt my legs were praying.”

Well and good, cynics said. But, that was more than 50 years ago.

The second possibility: to realize that yes, there are vulgar manifestations of anti-Semitism — but that there has been pushback on them. That is the story of Banner, and Kareem and Cannon’s willingness to learn and grow.

What do I say to those celebrities who are unrepentant in their venom?

“You think that your vile comments are going to deter me from fighting for justice? Forget about it. It is not going to work.

“Because ... John Lewis. From now on, everything that I do to fight the pervasive racism in this nation I will do — pointedly — as a kaddish for John Lewis.”