(RNS) — Twenty years ago, sociologists Michael Emerson and Christian Smith published a landmark study called “Divided by Faith: Evangelical Religion and the Problem of Race in America.” They pointed out that white evangelicals had a limited “toolkit” for dealing with racism. Since white evangelicals construed faith individualistically, as a “personal relationship with Jesus,” their faith (and theology) offered a limited capacity for understanding social issues.

When all you have is a hammer, everything looks like a nail; and when your hammer is “accepting Jesus into your heart,” every nail is an affair of the heart. So when white evangelicals do recognize racism, they tend to see it as a “personal” sin requiring repentance, not a structural injustice demanding rectification. When the sin of racism is reduced to personal animosity, the “solution” is simply relationships.

That’s why so many white Christians have responded to the recent protests demanding systemic change by encouraging friendship across the racial divide. They prefer to pursue “reconciliation” rather than justice.

This has been the white evangelical approach at least since the interracial hugfests at Promise Keepers conventions in the 1990s and continues today in the “multicultural” ideal for nondenominational megachurches. Emerson and Smith’s analysis remains as relevant as ever in our current reckoning with systemic racism because these are still the only tools that the functional theology of evangelicalism has been able to provide.

But we need to lift the top drawer of that limited toolkit to discover another factor that hampers white evangelicals’ view of racism. While Emerson and Smith rightly pointed to the individualism of evangelical theology, I suggest another aspect of evangelical spirituality is also at work: what we might call evangelicalism’s rationalism. 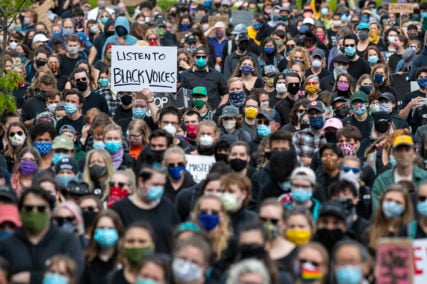 By evangelical “rationalism,” I mean a tendency to construe Christianity as a set of beliefs to be affirmed, a “worldview” to which one gives intellectual assent. Even when evangelicals press their neighbors to “accept Jesus into your heart,” what they mean is to believe a set of claims about God, about sin, the work of Jesus Christ and how salvation is offered. The Christian life is understood as a regimen of Bible study, memorization and catechesis. Many evangelicals listen to sermons like lectures, notepad in hand, trying to capture the lesson.

So by “rationalism,” I mean this tendency to construe Christianity as a set of beliefs, ideas and doctrines — a kind of “talking head” version of religion that makes saying “yes” to a list of beliefs central to the faith. So central is this idea of faith that some may wonder what else it could mean. But in other streams of Christianity, both Catholic and Protestant, religion is something that you do, putting the emphasis on habit-forming practices and disciplines.

So while other Christians and people of other faiths might see that they must change their practices in regard to race, white evangelicals still think of it in terms of what they believe: To be a racist, they say, is to believe X, Y and Z about a group of people. And if I can confidently assert that I don’t believe X, Y or Z, then I can also comfort myself with “not being a racist.”

What we are all coming to realize, however, is that racism doesn’t have to convince our intellects to co-opt our imaginations. It is absorbed through practices we never think about, even in spaces where the “doctrines” might be disavowed.

If white evangelicals’ focus on belief might recognize racism as “false doctrine,” it misses racism as perceptual vice: a disordered habit of seeing others. Such vice is carried in our bodies more than it is articulated by our intellect. Philosopher George Yancy has noted what he calls “the Elevator Effect”: the bodily gestures and rituals of the white person when a black man steps on the elevator. If you ask this white person what they believe, of course they’ll disavow racism as an ideology.

In its focus on belief and knowledge, evangelicalism is remarkably modern, almost a mirror image of Enlightenment rationalism. But we can’t think our way out of racist habits. White evangelicals must look to the other historic streams of Christianity, both Catholic and Protestant, for more resources to recognize the spiritual significance of habit. We need a repertoire of disciplines and practices, such as confession, that are meant to rehabituate the habits of the heart.

Until evangelicalism becomes attuned to the habits of the heart, it will never adequately address the sin of racism.

(James K.A. Smith teaches philosophy at Calvin University and is the author of “You Are What You Love: The Spiritual Power of Habit” and “On the Road with Saint Augustine.” The views expressed in this commentary do not necessarily reflect those of Religion News Service.)