That was the vision of Muhammad Ali Jinnah, who as Pakistan’s founding father had rallied for a state where all would be free to believe in any faith or indeed in no faith at all. The country would harness the power of an equitable state and the talents of all its citizens to propel the country to the fore.

Seventy-three years on, Jinnah’s vision of secularism, equality and prosperity lies crumpled as Pakistan’s concern for civil freedoms has all but vanished. Ironically, its religious communities have suffered the most, and none more so than the Ahmadiyya Muslim Community.

Britain’s All-Party Parliamentary Group for the Ahmadiyya Muslim Community recently published a report on the persecution of Ahmadi Muslims in Pakistan, titled “Suffocation of the Faithful.”

“Such is the extent of persecution that it is no exaggeration to describe the life of an Ahmadi Muslim in Pakistan as one that faces persecution from the cradle to the grave,” the report states. “At every step of their lives, they remain ever at risk of arrest, attack or harassment. Ahmadis have been denied their fundamental right to vote, they cannot possess their religious texts, and even after death their graves are targeted and bodies exhumed.”

Among the range of human rights violations, the report found worrying evidence of Pakistani textbooks promoting extremism by inciting hatred against other religious communities.

School textbooks incite hatred against the Ahmadiyya Muslim Community by labeling Ahmadis as “Kafir” (disbelievers) and apostates, for which they prescribe the death penalty. Furthermore, textbook stickers are distributed in schools stating that any communication or friendship with Ahmadis is completely haram (forbidden) and calling for students to send names of Ahmadi students to Khatme Nabuwwat, an organization that has been at the forefront of violent anti-Ahmadi hostilities. 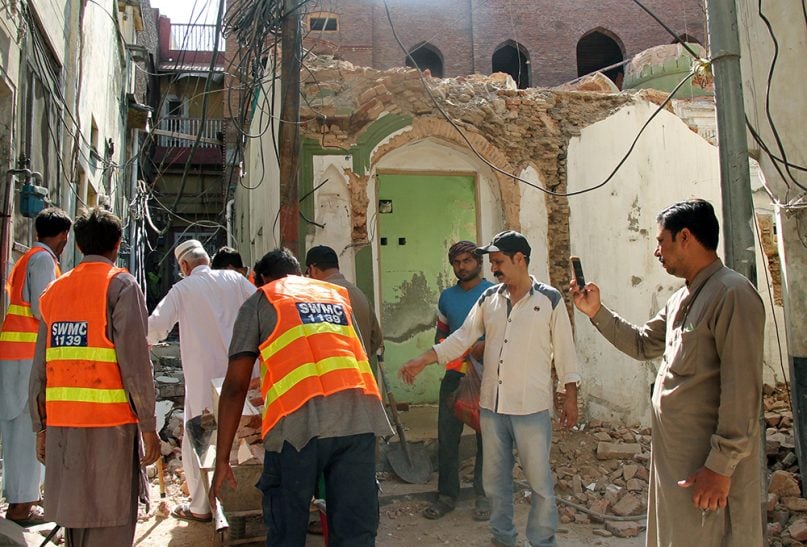 Pakistani volunteers collect debris from a demolished Ahmadi mosque in the eastern city of Sialkot, Pakistan, on May 24, 2018. Sunni extremists demolished the mosque belonging to Pakistan’s minority Ahmadi sect, yet another attack on minorities in the country. (AP Photo/Shahid Ikram)

Additionally, the report reveals how Ahmadi Muslim students of primary school age regularly face threats at school. Teachers, rather than maintaining discipline, turn a blind eye or worse, actively identify, denigrate and ridicule Ahmadi Muslim students in front of their class. Ahmadi Muslims face a constant risk of being denied access to education and those who secure a place are routinely targeted and stigmatized through physical and emotional abuse.

We heard during the inquiry that it was not uncommon for teachers to seclude students from minority backgrounds: They would be forced to eat, sit and play separately.

One must wonder what Pakistan can gain by excluding rather than harnessing talent.

During the launch of the report, Lord David Alton highlighted the fact that millions of pounds in British taxpayers’ money is given in aid to Pakistan.

While Britain rightly remains committed to helping the poorest in the world, the U.K. government must not do so blindly.

As the report notes, it must ensure that U.K. aid is not being used inadvertently to teach hatred, for example through textbooks, which evidently nurture intolerance and extremism.

Rather, checks and balances must be put in place to effectively counter hatred and promote diversity, respect and inclusion among schoolchildren, for it is the youth who will bring about the change needed in Pakistan to revert the country to the ideals of Jinnah.

As I wrote in the report: “It is time to say that enough is enough and that is why this report calls on the UK Government, and the wider international community to take immediate action to give Ahmadi Muslims, one of the most charitable and peaceful communities I know, their basic human rights.”

(Siobhain McDonagh is a member of the British Parliament and chair of the All-Party Parliamentary Group for the Ahmadiyya Muslim Community. The views expressed in this commentary do not necessarily reflect those of Religion News Service.)