(RNS) — Growing up in Rochester, New York, attending an evangelical church on Sundays and Bible study on Wednesdays, Josh Dickson never expected he would one day support a Democrat for president.

Today, Dickson is not only a Democratic voter but the Biden for President campaign’s national faith engagement director. Saying he still cherishes the values his parents instilled in him, Dickson was converted by his experience as a community organizer in Chicago’s South Side.

I spoke with Dickson about his spiritual and political transformation, his role with the Biden campaign, and what he sees as the key issue for faith communities in the 2020 presidential election. This interview has been adapted for length and clarity.

Tell us a little bit about your upbringing and the foundations of your faith.

I come from a family with a long history of faith. My dad, his three siblings, his parents and his grandparents all went to Moody Bible Institute (the prominent Christian school in Chicago). We always had a more nondenominational orientation, and church was big for us. Our family went to church twice on Sundays and once on Wednesdays. We grew up going to an American Baptist Church and then a Free Methodist Church.

My parents were an incredibly big influence on me. My father is a teacher in a very rural school in upstate New York, and my mother is a real estate agent who was known for always supporting those in need. They always modeled service — that’s how they lived their faith. Service was a core value they instilled in me, and it’s a big piece of how I saw my faith playing out.

When and why did you begin challenging some of your religious and political views?

The real transformation took place after college (at the University of Michigan). I took a position with Teach for America on the South Side of Chicago, and I loved getting to know my kids, their families and our community partners. 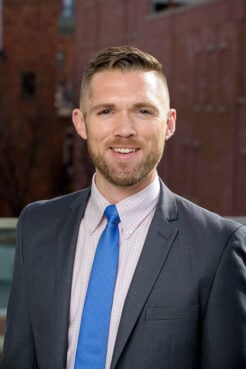 Through these relationships, I saw all the ways that systemic barriers were put up for my young kids, who had all the potential in the world. Seeing all that inequity challenged me to think about how I understood my own faith, and especially the teachings of Jesus.

It was at this time that I read President Barack Obama’s book “The Audacity of Hope,” in which he wove together his views on theology, philosophy and public policy. That had a big impact on me. That’s when I got involved with a community organizing group, and this exposed me even more to people of all different backgrounds.

How did your family react to your new political views?

My parents have always really been great about allowing us to choose our own path and journey. They focus more on core values than on political views. Part of what has helped me stay connected with family is recognizing that people are all socialized in different ways based on the environments in which we grow up. Understanding this has led me to listen and meet people where they are as much as possible — and that lays the groundwork for relationships.

This outlook also informs my approach for the faith outreach work for the Biden campaign. We have listening sessions all the time with people of a whole panoply of different backgrounds, and through those, we are trying to build relationships and hear people out. It really helps to get that relational piece in place so that when we encounter issues that are more challenging, we can address them while already on a firm footing.

Which teachings from your faith animate your work?

I always go back to Jesus’ commitment to fighting for people who are marginalized and systemically disadvantaged. I think about Jesus’ teachings, such as “What have you done for the least of these?” or “I have not come to be served, but to serve.” Those are the types of things we need to look at when we’re measuring politics.

I deeply believe in loving our neighbor as ourselves, and that’s why I feel morally compelled to get involved in the political sphere. A core belief for me a Christian is that everyone’s inherent human dignity matters and that everyone was created in the image of God and everyone should have the chance to reach their God-given potential.

How do these views align with those of former Vice President Joe Biden? And how do you see them shaping faith outreach through the election?

The key religious issue of this election is systemic racism. We’ve seen this issue play out so much in the public square. People have worked for decades and centuries to address racism, and for some people, they are taking stock of it for the first time. It’s really important for us to see that and lean into this important moment, so that we’re dealing with the changes that we’re on the precipice of.

It’s with this in mind that we plan to operate on the basis of three key principles. We want to ensure that people of all faith backgrounds feel valued by the campaign. We want to ask people for their votes in a direct and honest way. And we want to make the case that Vice President Biden’s vision is much more aligned with the values of faith-based voters than what we have at present.

There’s such a strong contrast in the values that Vice President Biden brings to the table — decency, treating people with respect, pursuing ideals of equality and equity, fighting against racism. The other side puts kids in cages, separates children from their families, vilifies many different communities, denies safe harbor to refugees, argues in favor of symbols of slavery and puts out this idea that not everyone belongs.

That’s not who we are. When we are at our best, we’re operating in a way that ensures human dignity for everyone and that people have a chance to participate in society equally.