(RNS) — “People of faith have long led change, from abolition and women’s suffrage to the labor movement and the struggle for civil rights,” said U.S. Sen. Chris Coons, D-Delaware, Thursday night (Aug. 20) during his address to the Democratic National Convention. “Joe Biden will continue that progressive march towards justice, inspired by respect for the dignity of all people, people Joe believes were made in the image of God.”

Coons, a Yale Divinity School graduate and an ordained Presbyterian elder, delivered the most faith-focused message of the convention.

But he certainly wasn’t alone in focusing on faith.

The past four days have emphasized the Democratic Party’s commitment to religious outreach and that has the potential to transform all of American politics.

Earlier this week, Michelle Obama described Biden as a “profoundly decent man, guided by faith,” and emphasized the role of empathy in her address.

“If we see someone suffering or struggling, we don’t stand in judgment,” the former first lady said. “We reach out because, ‘There, but for the grace of God, go I.’ It is not a hard concept to grasp. It’s what we teach our children.”

Jill Biden said her husband’s “faith is unshakable — because it’s not in politicians or political parties — or even himself. It’s in the providence of God.”

In addition to highlighting Joe Biden’s personal faith, the convention emphasized the role of religion in the Democratic Party. A diverse group of faith leaders — including Jewish, Muslim, Protestant, Catholic and Eastern Orthodox clergy — were invited to pray at the convention, including Bishop Mariann Budde of the Episcopal Diocese of Washington.

Budde made headlines earlier this year after she rebuked President Donald Trump for posing with a Bible in what seemed like a photo stunt at one of the Episcopal churches she oversees.

She prayed for God’s blessing to “inspire us all, to realize Dr. King’s dream of a beloved community, Congressman Lewis’ dream of a just society, President Lincoln’s dream of a more perfect union.”

The convention held an interfaith service and Catholic Mass. And earlier Thursday, I spoke at a “Believers for Biden” virtual convention watch party with actress Jennifer Garner. My message was simple: The religious diversity of the Democratic Party is a cause of celebration.

Seventy-one percent of Democrats and Democratic leaners identify with a religious tradition, according to Pew Research Center. Yet we rarely hear about the religious diversity of the party or our leaders. The embrace of religion spans the ideological spectrum of the party, from U.S. Reps. Alexandria Ocasio-Cortez and Ilhan Omar to Speaker of the House Nancy Pelosi and former President Barack Obama. Obama has been speaking eloquently about his Christian faith as far back as 2004, when he delivered his history-making address at that year’s Democratic National Convention.

For too long, an imbalance of public discourse about the role of religion in each party has led to a warped perception that the GOP is the party of God. The idea Republicans have a lock on God heightens political polarization and erases a key motivation of progressive politics. 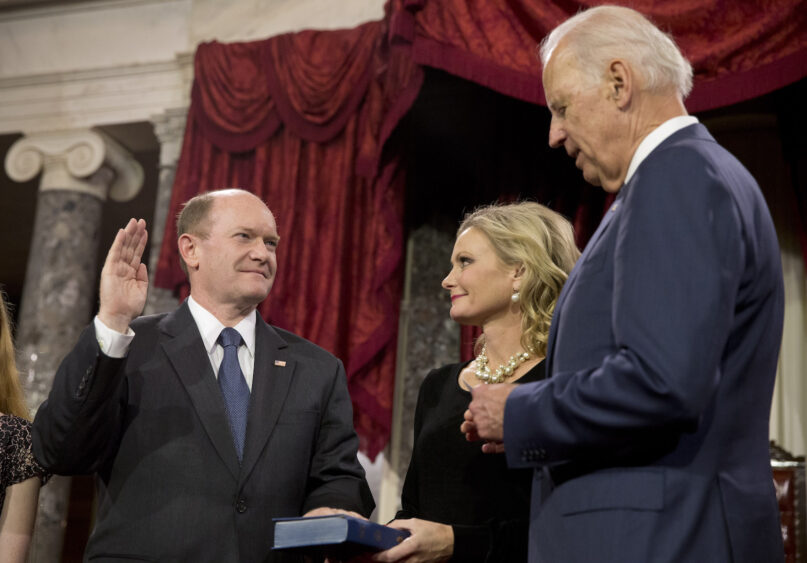 In this Jan. 6, 2015, file photo, Vice President Joe Biden administers the Senate oath to Sen. Chris Coons, D-Del., as Coons’ wife, Annie Coons, watches during a ceremonial re-enactment swearing-in, in the Old Senate Chamber on Capitol Hill in Washington. When Coons speaks to the Democratic National Convention on Thursday, Aug. 20, before Biden’s speech accepting the party’s presidential nomination, his remarks will focus on faith — attesting in highly personal fashion to his longtime friend’s belief in God. (AP Photo/Jacquelyn Martin, File)

Coons’ speech Thursday set a new standard for how Democrats can approach faith outreach: Acknowledge the faith of the American people, the personal faith of most Democrats, and cast policy battles in moral terms.

The diversity of the American religious landscape is one of our nation’s greatest strengths, including a growing share of Americans who don’t identify with any one religion.

“Joe knows that it’s faith that sustains so many ordinary Americans who do extraordinary things: nurses who brave infection, firefighters who run into burning buildings, teachers working overtime, especially now,” Coons said. “They all deserve a servant leader who knows the dignity of work, who sees them, respects them, fights for them.”

The ordinary Americans motivated by our nation’s diverse religious traditions appreciate this acknowledgment from our leaders, especially when they demonstrate their words. By all accounts, Biden has lived out and relied upon his faith. Coons offered his own example: “I’ll never forget how Joe took the time to offer me words of comfort as my father lay in hospice.”

“Joe’s faith is really about our future, about a world with less suffering and more justice, where we’re better stewards of creation, where we have a more just immigration policy, and where we call out and confront the original sins of this nation, the sins of slavery and racism. Joe knows these are central issues in this election and, for him, they’re rooted in faith.”

In this battle for the soul of our country, the Biden campaign acknowledges what we all know: Many people of faith are on his side.

Coons’ speech may not grab the most headlines, but his sincere and narrative-busting embrace of religion on the same night Biden accepted the presidential nomination should be a pivotal moment in Democrats’ efforts to reclaim a positive role for religion in politics.

(Guthrie Graves-Fitzsimmons is the author of “Just Faith: Reclaiming Progressive Christianity.” The views expressed in this commentary do not necessarily reflect those of Religion News Service.)