“We are deeply concerned that in the midst of the unprecedented, COVID-19 pandemic, immigrants who are eligible to be released from local and state custody continue to be funneled into Immigration and Customs (ICE) detention facilities where the virus is spreading rapidly and unabated,” the letter read.

The Aug. 28 letter, from the Interfaith Movement for Human Integrity group, includes signatures from imams, pastors, priests, ministry leaders, sisters and others.

More than 50 religious networks and denominations have endorsed the letter, including the California-Nevada Conference of the United Methodist Church, Unitarian Universalist Justice Ministry of California, Dominican Sisters of Mission San Jose, the California Religious Action Center of Reform Judaism and the Alliance of Baptists.

Interfaith Movement for Human Integrity said Newsom can stop the transfers of detainees from state prisons to immigration detention facilities by issuing an executive order.

The Rev. Deborah Lee, executive director of Interfaith Movement for Human Integrity, told Religion News Service the group has not heard from Newsom’s office since sending the letter. She said faith leaders, before submitting the letter, have twice met with Newsom’s staff over the phone. Lee called the meetings disappointing. She said Newsom representatives appeared unprepared to discuss the issues. 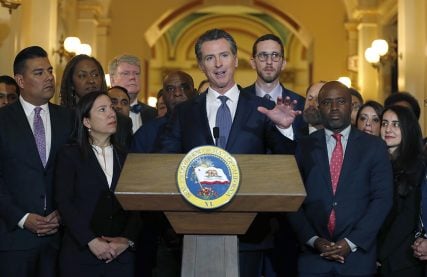 California Gov. Gavin Newsom during a news conference at the Capitol on March 13, 2019, in Sacramento. (AP Photo/Rich Pedroncelli)

Lee said the issue is pressing, given that since submitting the letter, the California Department of Corrections and Rehabilitation had already transferred two people to U.S. Immigration and Customs Enforcement.

The interfaith leaders have made other requests. Lee said they’re asking the governor to use the state attorney general’s office to hold immigration detention facilities accountable for public health violations. They’re also urging the governor to broaden the number of people released from the California Department of Corrections and Rehabilitation.

“We believe that everyone is capable of redemption, change, and transformation, that past convictions do not define who a person is now and can become, and that immigration detention while a person’s immigration case is adjudicated is an unnecessary form of incarceration,” the letter read.

From the beginning of the pandemic through the end of August, Cal Matters reported that California will release more than 11,000 prisoners early. These prisoners include largely nonviolent offenders with less than a year to serve, according to the news site.

In mid-August, a federal judge ordered coronavirus testing of everyone at a Bakersfield immigration detention center, saying authorities had shown “deliberate indifference to the risk of an outbreak.”

U.S. District Judge Vince Chhabria said U.S. Immigration and Customs Enforcement has “lost the right to be trusted” that the agency will take safety measures at the Mesa Verde Detention Center in Bakersfield, according to the San Francisco Chronicle.

Officials on May 6 announced the first COVID-19 death of a detained immigrant, Carlos Escobar-Mejia, at Otay Mesa, an ICE detention center in San Diego County.

On May 17, Choung Won Ahn, a 74-year-old with health problems, died by suicide after being transferred by the California Department of Rehabilitation and Corrections to Mesa Verde, an ICE detention center in Kern County, according to a letter signed by 45 state legislators urging Newsom to suspend transfers to immigration detention facilities.