KENOSHA, Wis. (RNS) — The message appeared on signs, T-shirts and face masks in the crowd.

But Sonja Wolfe, a member of the Evangelical Lutheran Church in America’s Church Council and resident of Kenosha, Wisconsin, said she was tired of feeling like they don’t.

“I’m tired of feeling like I don’t matter to some people because of the color of my skin. I’m tired of trying to make others see or hear that this is wrong. I’m definitely tired and fed up with Black people, sinner or saint, being brutalized and villainized out of fear and hate simply because of the color of our skin,” Wolfe said at a prayer vigil held late Wednesday afternoon (Sept. 2) at Grace Lutheran Church in Kenosha.

“I’m tired of wondering: When will it change and when will it get better?” 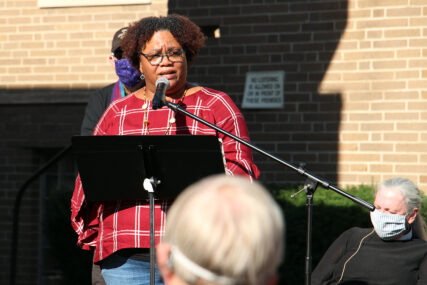 Wolfe shared an experience when police were called on her family 20 years ago as they gathered to grieve her stepfather’s death. She shared how she has been judged before saying a word, how she’s learned to fear police even though her father was a member of the Chicago Police Department and she herself served in the military.

And she said she hoped by sharing her story, the people gathered at the vigil would see her when they see injustice and racism and say, “No more.”

About 200 people — including the head of the largest Lutheran denomination in the United States — gathered Wednesday on the front lawn of Grace Lutheran Church to pray, confess and lament the police shooting of Jacob Blake.

The prayer vigil was organized by the seven ELCA churches in the city.  Kenosha also is home to Carthage College, one of 28 ELCA colleges and universities.

The vigil followed more than a week of unrest in the city after Blake, a Black man, was shot multiple times in the back by a white police officer on Aug. 23 in Kenosha.

Protesters continue to call for justice for Blake and an end to anti-Black violence. Rioting and looting also have damaged some businesses in the city. Kyle Rittenhouse — a white 17-year-old from Antioch, Illinois, just over the Wisconsin border — has been charged after prosecutors say he shot and killed two protesters, Anthony Huber and Joseph Rosenbaum, and injured a third.

On Wednesday evening, as the vigil wrapped up blocks away, downtown Kenosha was quiet, and the city’s emergency curfew was lifted after police said it had been “relatively peaceful” for days. 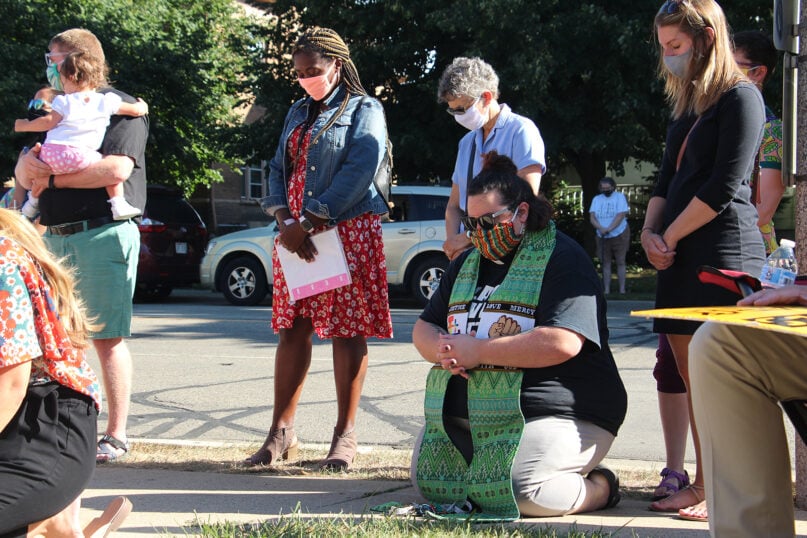 Sheridan Road, one of the main streets through downtown, remained barricaded, with buildings in the area boarded up.

Many of those boarded-over windows were painted with colorful murals and messages.

Some were drawn from faith: “No Jesus / No Peace / Know Jesus / Know Peace.” “Perfect love casts out fear,” a passage from the biblical book of 1 John. “This is the message you heard from the beginning: We should love one another,” also from 1 John.

But the Rev. Paul Petersen of St. Mary’s Lutheran Church in Kenosha said more needs to be done.

“We can’t be satisfied with paint over plywood and slogans such as ‘Kenosha Strong,’” Petersen said. 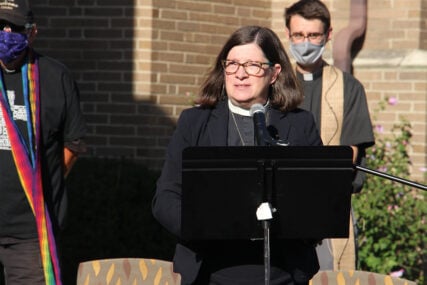 Several pastors led the crowd at Grace Lutheran Church in prayers of lament and confession — a familiar ritual for Lutherans, according to the Rev. Paul Erickson, bishop of the Greater Milwaukee Synod.

Their prayers asked God for justice and healing for Blake, punctuated by honks and shouts of “Amen, brother!” from cars driving past.

They asked the people gathered to reflect on how they had been complicit in or benefited from systemic racism and to consider one concrete step they can take.

Then the Rev. Kara Baylor, campus pastor at Carthage College, offered a few suggestions specifically for the white members who overwhelmingly make up the ELCA. Those suggestions included educating themselves about race and racism, joining peaceful protests and learning how systemic racism impacts policy — not all policies, but, for each person, “the thing you are called to do.”

And, Baylor said, “Be open to a change of heart.” Christine Reardon, who lives near Grace Lutheran Church, and Vivienne Clyne, who attends the church, said after the vigil that they most appreciated Baylor’s message.

Eaton called the crowd to use those tools to get to work and to wrestle with uncomfortable truths in the same way the patriarch Jacob wrestled with God in the biblical account.

Unlike many of the others gathered on the lawn at Grace Lutheran Church, Wolfe said she’d realized beforehand she didn’t have anything with “Black lives matter” to wear to the prayer vigil. It didn’t bother her for long.

“And then,” she said, “I realized that I don’t need to wear anything because my skin tells that glorious story.” 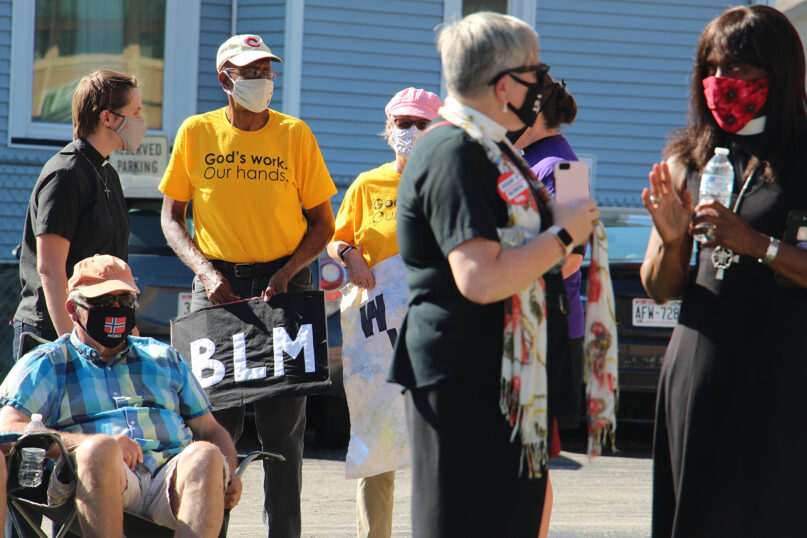