(RNS) — The Rev. Gil Caldwell, a civil rights activist who later in life stood up for gay rights in the United Methodist Church, died Friday (Sept. 4) at the age of 86.

The native of Greensboro, North Carolina, struggled with cancer, his son said on Twitter. United Methodist News Service reported he had been in hospice care in New Brunswick, New Jersey.

A self-described “foot soldier” in the civil rights army of the Rev. Martin Luther King Jr., Caldwell said his application to Duke Divinity School was rejected in the mid-1950s because of his race. He visited the campus some 60 years later as a to-do he wanted to check off his bucket list.

“Even as we’ve made steps forward in terms of women’s rights or in terms of Black rights, we must not forget where we once were,” Caldwell told Religion News Service during his 2015 campus visit.

In 2017, the divinity school — which did not admit its first African American students until 1962 — invited the retired clergyman to speak at its morning chapel service.

“What is it that God would have Duke Divinity School do in light of that history?” he asked in Goodson Chapel. “For if one is not honest about that history, one can’t be fully present.” 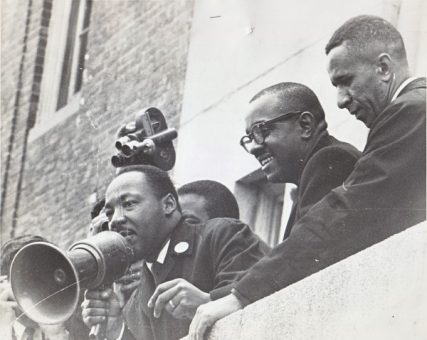 Left to right, the Rev. Martin Luther King Jr., the Rev. Virgil Wood and the Rev. Gil Caldwell at a school in the Roxbury section of Boston in April 1965. Photo courtesy of the Caldwell Family Collection

As a student at Boston University’s School of Theology, Caldwell worked with King, who led him to rally for jobs at the 1963 March on Washington and for voting rights in the Selma to Montgomery march in Alabama, and to protest against school segregation in Boston.

Caldwell, the son of a preacher, was a founder of Black Methodists for Church Renewal and United Methodists of Color for a Fully Inclusive Church. A former associate general secretary of the church’s General Commission on Religion and Race, he lived long enough to both see his church move beyond having a segregated Central Jurisdiction of Black churches and continue his work as a “gay rights ally-activist” in his last years.

“What an irony that we’ve worked at racial integration and now persons who are same gender loving are viewed as second class and outside the framework of the church,” he told RNS in 2015.

After coming to an “epiphany moment,” Caldwell said he began protesting the official United Methodist policy that “the practice of homosexuality is incompatible with Christian teaching.”

Along with gay members of his denomination, he was arrested after disrupting the quadrennial General Conference in 2000. He described officiating at the wedding of two Black gay men about 15 years later as “a beautiful ceremony that I will always remember.”

“He was gentle but strong, wise but humble,” retired United Methodist Bishop Woodie White told UMNS of his mentor and friend. “His commitment to racial justice and inclusiveness was unyielding, whether in the church or nation.” 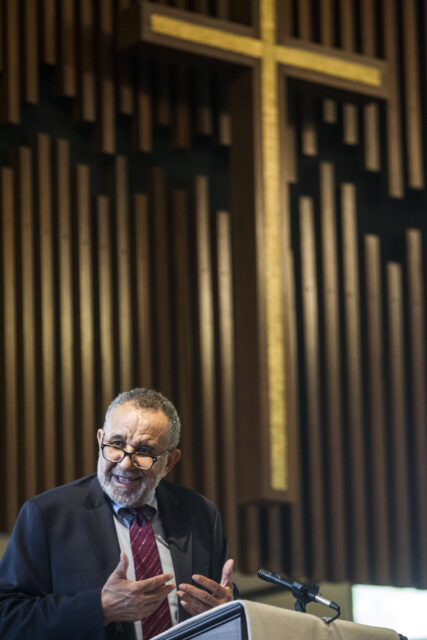 In 2015, Caldwell gave one of his many affirmations of LGBT rights in a sermon at a United Methodist church in Durham, North Carolina.

“In some ways, there is a possibility that on gay rights and marriage equality, God is speaking more through the judiciary than God is speaking through the United Methodist Church,” Caldwell said in his sermon at a social justice conference hosted by the gay-friendly congregation.

In recent years, Caldwell toured the country with Marilyn Bennett, with whom he co-produced the documentary “From Selma to Stonewall: Are We There Yet?” Bennett, who was among the gay activists arrested with Caldwell in 2000, recalled her production partner in a reflection on the documentary’s website.

“At every stop, Gil inspired and empowered audiences with his keen, engaging, humor and intelligence,” said Bennett. “You have broken our hearts Gil with your departure but not our spirits. No, we are still here and will move justice forward with your presence ever near.”

PFLAG, formerly known as Parents, Families and Friends of Lesbians and Gays, was among the organizations mourning Caldwell, who served it as a board member.

“I considered Rev. Caldwell a real role model for how to do the work within faith communities, and within communities of color,” said former PFLAG National Board President Jean Hodges in a statement. “As a Methodist — and the mom of a gay man — I was moved and inspired by all that he did to bring more allyship and engagement within the UMC. I will miss my dear friend, and PFLAGers everywhere have lost a real champion for inclusion.”

As recently as June 7, Caldwell was still publicly demonstrating his activism, appearing at a Black Lives Matter rally in Willingboro, New Jersey. When he spoke, he said he was encouraged by its multiracial attendance, according to the UMNS report on the rally.

“I will not get to the promised land with my Black family and those who are our allies,” he said. “But they, if they keep these moments alive, (may find) a semblance of MLK’s beloved community will be visible.”