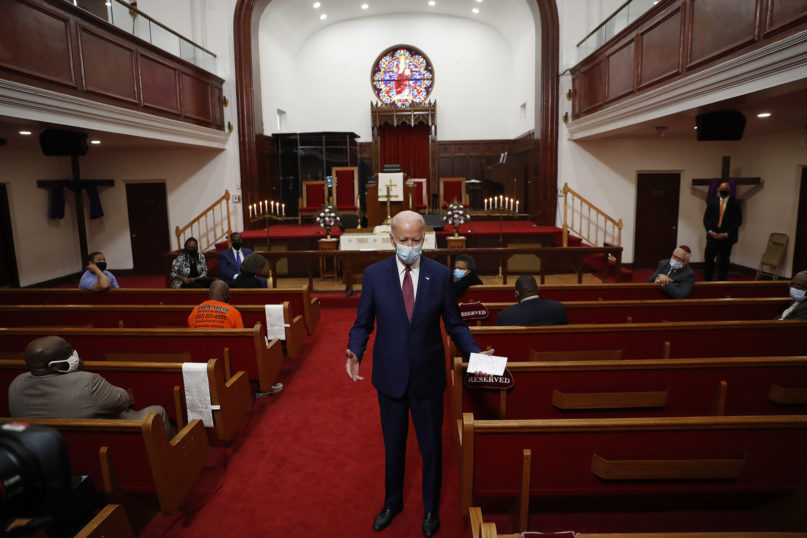 FILE – In this Monday, June 1, 2020, file photo, Democratic presidential candidate and former Vice President Joe Biden speaks to members of the clergy and community leaders at Bethel AME Church in Wilmington, Del. Democrats are betting on Biden’s evident comfort with faith as a powerful point of contrast in his battle against President Donald Trump. (AP Photo/Andrew Harnik, File)

(RNS) — Perhaps the most mentioned data point in contemporary politics is 81% — the share of white evangelical Protestants who voted for Donald Trump in 2016. Only 16% supported Hillary Clinton. Mormons, who have voted heavily Republican in the past, were less enthusiastic but still went for the controversial GOP candidate, with exit polls showing that 61% favored Trump.

Given those figures, it may be surprising that Joe Biden’s presidential campaign is reaching out to both groups in advance of the November 3 presidential election.

Dickson said the campaign starts from the general belief that voters of faith are looking for candidates “who align with common-good values, like loving our neighbors as ourselves, and working to ensure that everyone has a chance to reach their God-given potential.”

Many Americans who have voted Republican in the past have been alarmed by ways the Trump administration has “acted in ways that are so antithetical” to those shared values, whether by mishandling the nation’s pandemic response or denying asylum to refugees.

The Biden campaign sees voters’ disappointment as an opening, one that Dickson and others are working to expand. On the ground that looks like outreach events, primarily online, specifically to religious voters in key battleground states.

For Mormons, that means supporting the “Latter-day Saints for Biden-Harris” organization and targeting voters in key states with significant clusters of Latter-day Saints, namely Arizona, Nevada, North Carolina and Florida.

For evangelicals, Dickson said the campaign plans outreach to voters in Florida, North Carolina, Arizona and Michigan, as well as Latino faith outreach to Catholics and evangelicals in various states, “with a prime focus on Florida.”

An August Fox News survey found that 29% of white evangelicals disapproved of the way Donald Trump was doing his job. Although 70% said they still approved of the president, the erosion of support could represent an opening for Democrats. 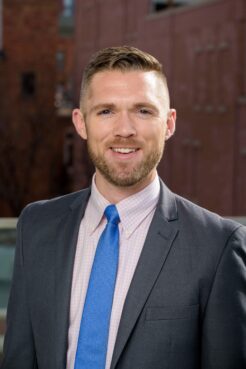 Dickson himself used to be a conservative voter. I come from a family that has a long history in the evangelical church,” said Dickson, whose father, grandparents and great-grandparents all went to Moody Bible Institute and who grew up attending church twice on Sunday and again on Wednesday. He identified as a Republican until he graduated from college, when he became a teacher at a low-income urban school in Chicago.

That experience opened his eyes. “Just going through life with my students for two years and seeing the challenges they faced, and how the deck was so stacked against them because of where they were born, pushed me to think about what that meant for me as a Christian, and to interrogate my faith and my choices around my career path,” he said.

He realized what a privilege it had been for him to go to college and get an education — a privilege that was out of reach for many of his students, not because they lacked the ability, but because they were trapped in a world with little opportunity.

“That went against everything I believed as a Christian, in imago dei: that everyone should have the chance to fulfill their God-given potential,” he said.

As he questioned which side of the political aisle was doing more for people like his students, he became a Democrat. He attended the Kennedy School of Government at Harvard University and in 2011 helped the Young Democrats organize their first-ever Faith and Values program.

Dickson doesn’t think his story is that unusual and that, in fact, there are many religious Americans who are looking for a candidate who is “more concerned with what we can do to serve the community, rather than what people can do for me.” As part of his work to reach those voters, he and others have organized an interfaith “Believers for Biden” Zoom devotional every Tuesday evening, where voters of faith gather for a brief spiritual check-in, with prayer and a short message from a faith leader.

“It’s an opportunity for us to step away from the busy-ness of our lives and make sure we can stay centered in the values that make us who we are,” Dickson said.

They’ll be meeting every Tuesday through election night. All people are welcome, including religious Americans who may have never voted for a Democrat before. “I know so many people who might identify as evangelical and LDS whose values are deeply aligned with the values that we’re fighting for, but who maybe haven’t voted for us in the past,” Dickson said. “We are making the affirmative case that the Biden-Harris agenda resonates and aligns with the values these people hold.”