CHICAGO (RNS) — The Episcopal Diocese of Chicago is planning to put its downtown headquarters up for sale.

The dark, midcentury office building at 65 E. Huron St., not far from the city’s downtown landmarks and glittering Magnificent Mile, houses the offices of the bishop, Episcopal Charities and the staff of St. James Cathedral, which is next door.

“Put simply, maintaining an underused diocesan headquarters in an expensive building on prime real estate is not good stewardship of diocesan assets,” Chicago Bishop Jeffrey D. Lee wrote in a letter Tuesday (Sept. 15) to members of the diocese.

The proposed sale comes after nearly a year of discussions and a deficit in the diocese’s operating budget.

It also comes months into the novel coronavirus pandemic, which Lee told Religion News Service confirmed the diocese’s decision. He’s heard epidemics —including the current pandemic — called “the great accelerator of trends that are already present,” he said.

“I think there’s every possibility that when we get to the other side of this, whatever that means, we’re going to find there are some practices we’ve learned that we’ll want to continue that will reduce costs — not just for churches, but for businesses,” he said. 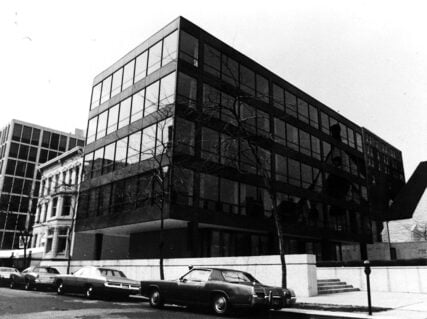 The proposed sale would create an endowmentlike fund that would be governed by the diocese’s Bishop and Trustees, which currently holds the title to the property. At least part of that fund would go toward creating affordable housing, according to the diocese.

Lee, who has announced his plans to retire at the end of the year, said he imagined that fund would also be used to meet the needs of a growing number of Spanish-speaking congregations in the diocese, among its fastest-growing churches. And it would help meet rising infrastructure costs across the diocese, he said.

The Episcopal Diocese of Chicago includes more than 33,000 members in 125 congregations across northern and west central Illinois, according to its website.

This isn’t the first time the diocese has explored selling its Chicago headquarters. A previous sale that had been planned before Lee took office in 2008 fell through, according to the diocese.

The world has only continued to change since then, the bishop said, making the building increasingly unnecessary. For one, his staff is spending more of its time out among the congregations in the diocese.

While plans to move have not been made, the bishop’s staff and Episcopal Charities likely can find the office space they do need in other buildings in the diocese, he said.

“An early 1960s office building was appropriate in the early 1960s,” Lee said. “Our patterns of serving our diocese have changed, and, at the purely financial level, the maintenance of this building is becoming increasingly unsustainable given the other needs of the diocese.”

The diocese is expected to list the property for sale in 2021.