(RNS) — Giving to congregations has shifted upward after churches closed their buildings earlier this year due to the coronavirus pandemic, a survey shows.

The new State of the Plate research finds that close to two-thirds (64%) of churches across the country reported in August that giving is either up (22%) or steady (42%). By contrast, in April, a similar share of churches (65%) said they had seen a drop in giving.

“This is encouraging news for churches across America,” said Brian Kluth, a former pastor who is now national spokesperson for the National Association of Evangelicals’ Financial Health initiative. “These new findings show that most churches and their families are figuring out ways to survive and even thrive in the midst of all the challenges that the pandemic has thrown their way.”

The findings are based on responses from 1,076 mainline, evangelical and independent Protestant churches. Seven in 10 of them had less than 200 attenders before the pandemic.

A third of the responding churches were in cities or suburbs, almost another third were from towns, about a quarter were from rural areas or small towns and 9% were from large cities. 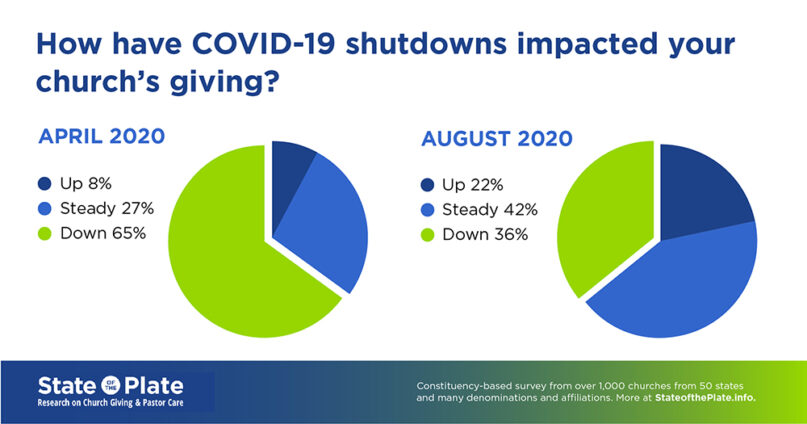 “How have COVID-19 shutdowns impacted your church’s giving?” Graphic courtesy of State of the Plate

The vast majority of respondents — 87% — said their congregations are currently meeting for in-person worship services. But more than half (58%) said attendance in person is half or less compared with pre-pandemic times. Six percent said they had seen an increase in attendance.

A survey released in July by LifeWay Research found that 71% of Protestant churches met for in-person services in mid-July, with almost all taking some precautions to try to prevent spread of the coronavirus. Barna Group, in a similar survey at that time, found 49% of church leaders said they were meeting inside their buildings.

Despite the upturn in giving, Kluth said pastors continue to face financial pressures from disruptions related to the pandemic.

“Even as finances stabilize for many churches, our research prior to the pandemic showed that 90 percent of pastors feel some level of financial stress in their family and church work,” Kluth, who also is the national spokesman for the NAE’s Bless Your Pastor movement, said in a statement. “This has been an especially stressful year for pastors and church staff.”

The research, conducted Aug. 7-30 in partnership with Christianity Today’s Church Law & Tax, had a margin of error of plus or minus 5 percentage points.

RELATED: Church giving down more due to COVID-19 than during recession, survey shows

News
Religious organizations prepare for ‘potential onslaught’ of evictions
Follow us on Facebook!
Submit your photos to RNS