(RNS) — There are “morally grave” reasons why Catholics should vote for Joe Biden rather than Donald Trump, according to a former top official at the U.S. Conference of Catholic Bishops who endorsed the former vice president in an article in the Jesuit journal America on Thursday (Sept. 17)

The article by John Carr, who worked for decades as the bishops’ adviser on issues of justice and peace, marks the first time he has endorsed a political candidate.

Previously, Carr, who is pro-life, has described Catholics as politically homeless because neither party completely reflects Catholic social teaching. Republicans were better on abortion while Democrats were better on social justice.

In his America essay, he criticizes those who “misuse the U.S. bishops’ Forming Consciences for Faithful Citizenship’ to insist that it is a sin to vote for Biden, that Catholics can’t be Democrats or are required to vote for Trump,” referring to the voters guide the USCCB releases in presidential election years.

Carr speaks with authority because, beginning in 1976, he helped the bishops to develop “Faithful Citizenship,” which has been published for nearly half a century. He knows the document better than anyone.

Nonetheless, Carr is “convinced that our bishops, priests and religious have a responsibility to teach, preach and form consciences,” but “not to tell us how to vote.”

Carr, currently director of the Initiative on Catholic Social Thought and Public Life at Georgetown University, believes “that under longstanding Catholic teaching and the moral criteria in the U.S. bishops’ statements, President Trump does not merit re-election and Biden can be supported by Catholic voters.” 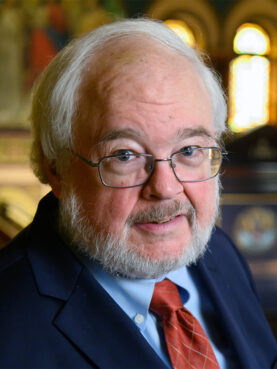 “I believe Mr. Trump’s character, lack of integrity and record on racism and Covid-19, among other matters, constitute ‘morally grave reasons’ to oppose his reelection and that Mr. Biden has the ‘character and integrity’ to lead our nation and is ‘more likely to pursue other authentic human goods,’” he wrote. “I will vote for Mr. Biden for what he can do to help us recover and heal, lift up those left behind, ensure healthcare for all and treat immigrants and refugees with respect.”

He said he understands that other Catholics might come to a different conclusion, and although he is clear in his choice, it is not without reservation.

“I will not vote for him (Biden) to support his position on abortion, but in spite of it,” he writes. He is especially disappointed with Biden’s abandonment last year of the Hyde Amendment, which forbids the use of federal money to support abortions.

Carr appears to have been swayed as much by the personalities of the candidates as their positions on issues. “Character, competence, honesty, and integrity are crucial” in this election, he writes. “In the end, we vote for candidates, not issues. Who they are and how they lead is critical.”

As someone who “watched Joe Biden for decades and worked with him on occasion,“ Carr testified, “I have also seen him stand up on issues of justice time and time again.”

Trump, on the other hand, “seems to be consumed with himself, lacks empathy and will not accept responsibility,” according to Carr. “His language on women, people of color, media, political adversaries, and the military is crude and unacceptable. His dismissal, dishonesty, and delayed response to Covid-19 brought deadly consequences for tens of thousands. He seems to view faith as a political tool, not a way of life; and his past and present behavior seem to violate most of the Ten Commandments, especially ‘not bearing false witness.’”

However, Catholics should make clear that their “responsibilities as citizens begin in the voting booth, but they do not end there,” writes Carr. Ending Trump’s administration is not “a mandate to end all abortion restrictions, provide federal funding for abortions, or to undermine religious ministries that serve the poor and vulnerable consistent with the principles of their faith.”

For Catholic observers, some of Carr’s most interesting revelations concern the history of the voter guide itself. He reveals Pope Benedict XVI inspired a major revision of Faithful Citizenship in 2007 to emphasize the role of conscience and prudence. “It is not the church’s responsibility to make this teaching prevail in political life,” wrote Benedict in his encyclical letter from that year, “Deus caritas est.” “Rather the church wishes to help form consciences in political life, and to stimulate greater insight into the authentic requirements of justice as well as greater readiness to act accordingly.”

Carr also reports that divisions among the bishops in 2019 kept them from updating the “Faithful Citizenship” to reflect current issues and the teachings of Pope Francis. Carr believes that “a new and shorter version, more fully embracing the teachings of Pope Francis and addressing new threats to human life and dignity and even democracy itself, would be better; but the bishops’ conference lacks the unity, capacity and sense of urgency to undertake such an effort.”

At the same meeting, the bishops approved language declaring “the threat of abortion remains our preeminent priority,” while rejecting language from Francis stating, “Equally sacred, however, are the lives of the poor, those already born, the destitute, the abandoned and the underprivileged, the vulnerable infirm and elderly exposed to covert euthanasia, the victims of human trafficking, new forms of slavery, and every form of rejection.”

Carr believes that “the failure to include the full Pope Francis quote was a mistake and describing abortion as the pre-eminent priority is an incomplete and overly narrow moral criterion.”

“When Covid-19 leads to the deaths of more than 185,000 Americans, when an economic crisis, health and other disparities disproportionately threaten the poor, vulnerable and communities of color, I believe the protection of the lives and dignity of all God’s children should be the moral imperative in this election year.”

“When you are politically homeless, you need to seek shelter,” he concludes. “We need to work together to find or build a home. We need to be more rather than less engaged, to find others who share our values, to dialogue and persuade people to join us. We need to insist that parties, media and elite institutions see us, hear us and open their doors to us as we seek to advance the common good. We especially need to avoid righteousness, cynicism and any judgment or condemnation of others. As the PBS commentator Mark Shields suggests, it is better to seek converts than to punish heretics.”