(RNS) — “Mignonnes” is a film by French filmmaker Maïmouna Doucouré that premiered in January at the Sundance Film Festival, where it won the World Cinematic Directing Award.

You may know it better by its English title: “Cuties.”

And you may know it best from the backlash the movie has provoked since it landed last week on Netflix, the popular TV and movie streaming service.

The French-language film features a young Muslim girl as its main character, and much of the outcry has come from conservative religious groups.

But what is the movie about, and why has it struck such a dissonant chord? Let us explain.

The film tells the story of Amy, an 11-year-old Muslim girl living in Paris. Tamisha A. Tyler, co-executive director of Art Religion Culture (ARC), described it to Religion News Service as a “coming of age story” about Amy’s struggles with the expectations placed on her as a young woman, pulled between extremes.

Amy feels pulled in one direction at home by the expectations of her Muslim family, who have emigrated from Senegal, which include caring for her younger brothers and making food for her father’s wedding as he returns to the family with a second wife. She feels pulled in another at school as she tries to fit in there, too, desperately chasing “likes” on social media and eventually winning the acceptance of a group of girls who are obsessed with what Sundance describes as the “age-inappropriate dance routines” they see online.

“I think in her immaturity and her not having the space to work this out she goes from one extreme to another,” Tyler said.

The film culminates in the girls’ acceptance into a dance competition. Calling themselves the Cuties, they perform a routine dressed in short shorts and crop tops and mimicking the moves they’ve seen online — to the discomfort of many of the adults watching. 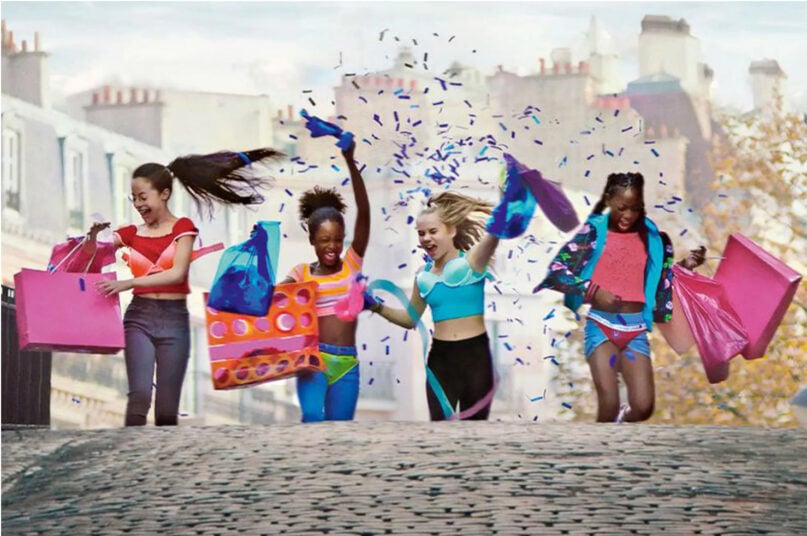 It’s an “uncomfortable” film, Tyler said, though she admitted that while watching the movie, she was a little confused as to why it has gotten the pushback it has. What happens in the movie mirrors what happens in real life, she said.

That real-life reflection should concern adults watching the film and push them to think about how they can create safe spaces for girls to figure out for themselves what it means to be a woman, Tyler said. She questioned whether audiences are equally upset by films about boys navigating their sexuality and why “it is always the girls’ fault for giving fuel to a predator.”

But it’s easier to critique than it is to be uncomfortable, she said. Some of the criticism against the film is concerned with whether it’s OK to ask young actors to depict the very sexualization the film is denouncing. For Tyler, that question is not easily answered.

“For all of the people that think, ‘We didn’t have to show that to talk about it,’ most of those people weren’t talking about it before the movie came out, so obviously we do,” Tyler said.

A review on RogerEbert.com calls “Cuties” a “difficult and challenging film, pushing the idea of ‘depiction does not equal endorsement’ to its limit.”

“Doucouré uses these uncomfortable images to provoke a serious conversation about the sexualization of girls — especially regarding girls of color, the policing of a girl’s sexuality, double standards, the effect of social media on kids, and how children learn these behaviors,” it reads.

The filmmaker has said it draws on her experiences as a young woman feeling the tension between Senegalese and Western cultures. She said it was also inspired by a performance she’d seen at a neighborhood festival, in which preteen girls were “dancing in a very sexually revealing way.” Doucouré spent the next year researching whether these young girls understood what they were doing and how social media impacted how they see themselves.

So it’s a movie about religion then?

Religion plays a role in the movie.

A scene early in the film uses religion to illustrate one set of expectations placed on Amy. During a prayer meeting, a female religious leader lectures a group of Muslim women, including Amy and her mother, asking, “Where does evil dwell? In the bodies of uncovered women. Therefore, we must strive to preserve our decency.” 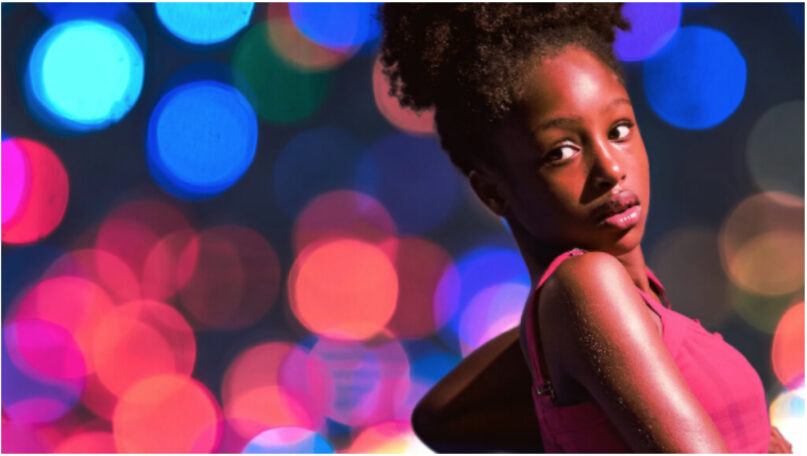 When they learn about Amy’s behavior, her mother and an auntie perform what appears to be an exorcism on Amy, splashing her with water as she shakes violently and writhes on the floor. Her movements are not dissimilar to the dances she performs with the Cuties, Tyler pointed out.

A later visit by a male Muslim leader paints religion in another way, the ARC director said.

“God has never imposed on women more than they can bear,” the man tells Amy’s mother.

“If your burden is too heavy, you have the right to leave this marriage. But know this: There is no devil or evil spirit here.”

Religion also plays a role in why people are upset about the film.

Back up: Why are people so upset about it?

The movie didn’t stir much controversy in France when it was released last year, according to The New York Times.

But since its release on Netflix in the United States, a number of groups have asked Netflix to remove “Cuties” from its streaming service, including religious groups. Calls to #CancelNetflix have trended on social media, and some Republican lawmakers have asked the U.S. Department of Justice to launch an investigation into whether the film violates laws against child pornography.

Among the religious groups condemning the film is the Council on American-Islamic Relations, the nation’s largest Muslim civil rights and advocacy organization. CAIR launched a petition earlier this week demanding Netflix apologize publicly and remove the film, which it calls Islamaphobic.

The film’s depictions of Islam range “from the stereotypical to the offensive,” according to CAIR National Executive Director Nihad Awad. CAIR specifically pointed out the father’s polygamy, the mother’s oppression and the exorcism scene, which occurs over an Arabic recitation.

Awad also brought up the tension of a movie depicting what it’s attempting to critique, saying in a written statement, “Although the filmmakers behind ‘Cuties’ have argued that the film is meant to criticize the hyper-sexualization of children, a film cannot criticize the abuse of children while abusing children.” This is where most of the social media backlash against “Cuties” centers: on the film’s sexualization of young girls and a concern that the movie borders on child pornography, creating fear for some that it will fuel pedophiles and child sex traffickers.

“By releasing the film ‘Cuties’ to its viewers, Netflix is now actively participating in the sexual exploitation of minors,” wrote Tony Perkins, head of the Family Research Council.

Other prominent Christians and Christian organizations have joined the outcry against the film, including the Rev. Tish Harrison Warren, an Anglican priest and author of the popular book “Liturgy of the Ordinary,” who argued online that condemning the movie “should not be a Left and Right issue.”

Abuse survivor and activist Rachael Denhollander has tweeted that it’s good people are upset about “Cuties” — but they should be equally upset by what’s happening to children in their communities, not just in the film.

“Everybody cares, until it would cost. Outrage is easy,” Denhollander tweeted. She continued:

“Speaking up in your own community, aligning with victims with inconvenient truths, pushing for accountability and real change, LISTENING if experts and advocates say you’re getting it wrong – that’s when it costs. Truly care.”

The Rev. Jimmy Hinton, a pastor and advocate for victims of church sex abuse, agrees.

Hinton told RNS he believes there is legitimate criticism of the film, and he doesn’t want to see it on Netflix.

“I think it’s inappropriate, and I think it’s very triggering for a lot of abuse survivors who’ve endured all kinds of sexual and physical and verbal abuse to see that. Children being exploited to tell a story, in my opinion, is never OK,” he said.

But many of the people Hinton knows who are canceling their Netflix subscriptions have not actually seen “Cuties,” he said. (He has seen it and described it as “bad” and “gross.”)

And it’s not helpful to label it with broad strokes as trafficking and pornography, he said.

Neither is simply posting outrage about the film on social media when there are videos of preteen girls doing “the same kind of dances on YouTube” and other platforms — not to mention comments from adult men pushing them to post even more provocative photos and videos, he noted.

“Taking ‘Cuties’ off of Netflix won’t save children from being exploited. It’s already happening all around us at unprecedented rates, especially in the church,” Hinton wrote in the Christian Chronicle.

Why am I hearing so much about a French film in the first place?

Well, the way Netflix chose to market the film grabbed some attention before it ever even streamed on the service. An early poster showed the girls in poses and costumes from the dance competition, and the description called them a “twerking dance crew.”

Netflix later updated the images and description on its platform, tweeting an apology on Aug. 20 for the way it had presented the film. 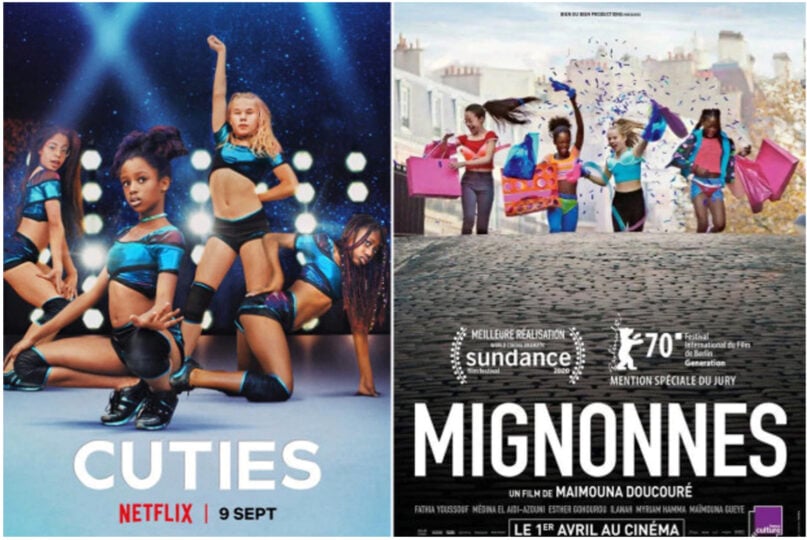 It read in part: “We’re deeply sorry for the inappropriate artwork that we used for Mignonnes/Cuties. It was not OK, nor was it representative of this French film which won an award at Sundance.”

Netflix’s massive reach and the fact that it is, as The Verge wrote, “perceived as ‘liberal’” appears to have contributed to how much attention the film has received, especially from conservative politicians, pundits and religious organizations.

Some have also pointed out that the backlash seems to play into the metanarrative woven in the QAnon conspiracy theory, in which much of Hollywood is controlled by pedophiles — though Hinton said of the conspiracy theorists, “I just don’t see them as being as influential as they think they are.”

Not to mention, the sexualization and exploitation of children is a real problem that people care about and are increasingly aware of, thanks to the #MeToo and #ChurchToo movements and organizations working to end child sex trafficking, noted Hinton.

Filmmaker Doucouré said she is one of those people.

“I’m hoping that these people will watch the movie now that it’s out,” she told Zora.

“I’m eager to see their reaction when they realize that we’re both on the same side of this fight against young children’s hypersexualization.” 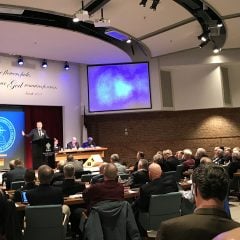 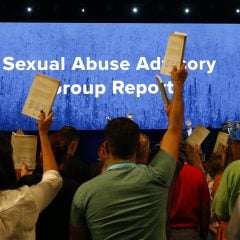