(RNS) — The people who worship at First Baptist Church in Maury City, Tennessee, have been exemplary during the long months of the COVID-19 pandemic.

The rural West Tennessee church’s members readily embraced online services, sometimes watching over and over so they could sing along with the music. When in-person services resumed over the summer, they wore their masks and socially distanced in the pews.

But what might have surprised First Baptist’s pastor, the Rev. Mike Waddey, most is that his congregation has kept giving despite all the changes the pandemic brought.

“I probably sold our people short,” said Waddey. “I thought they would not give if they were not in the building. Shame on me for that.”

Waddey is not the only pastor to be pleasantly surprised, according to a new study from the Lake Institute on Faith and Giving at Indiana University-Purdue University Indianapolis.

David King, director of the Lake Institute, said the institute surveyed 555 congregations for the study, mostly from a wide range of Christian traditions, along with a few Jewish and Muslim groups.

While not a representative sample, he said, the study gives a snapshot of how congregations have fared during the COVID-19.

Most have done pretty well, with both participation and finances holding steady. 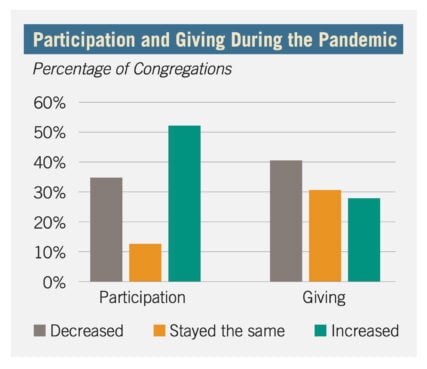 “Participation and Giving During the Pandemic” Graphic courtesy of IUPUI

About half (52%) have seen more people participating during the pandemic. At more than half, giving has remained the same or increased, while 41% of congregations say giving has gone down. Only 14% have had to cut or furlough staff, in part because many congregations (65%) had received a Payroll Protection Program loan from the Small Business Administration.

King said he was surprised by how well congregations adapted during the pandemic, especially in the early days last spring.

“Congregations really buckled down and did amazing work, quickly pivoting to online services and responding in a lot of creative ways,” he said.

Churches have also cut costs, according to the study, while trying to keep essential ministries going. Just over a third of congregations (38%) reported cutting nonpersonnel expenses during the pandemic. About 1 in 10 reduced giving to their denomination (12%), drew from reserves (10%) or cut funding for missions and benevolence projects (8 percent).

Congregations have also reached out to others in need.

Three in 10 of congregations in the study say they gave financial support to other churches, while nearly a quarter (22%) created a fund to aid congregation members in need.

At Memorial Road Church of Christ, a megachurch in Edmond, Oklahoma, church members gave about $165,000 for COVID-19 relief. Those funds help pay rent or mortgages, buy food and pay for other expenses for those who’ve been affected by the economic downturn.

They also gave more than a half million dollars at their annual mission drive in September. Giving to the operating budget is down a bit, but a payroll protection loan helped on those costs, said Andy Lashley, a church spokesman. 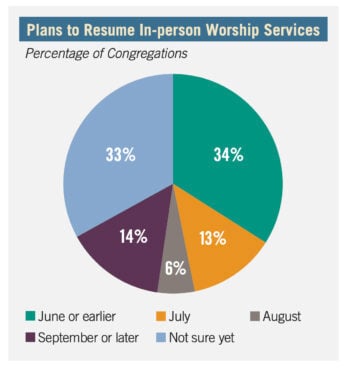 While the financial picture appears to be positive, many churches are still empty. According to the Lake Institute study, congregations were split about returning to meeting in person, with half (53%) saying they planned to begin in-person gatherings by the end of August. Fourteen percent expected to meet in September or later. A third were not sure when they would meet.

Catholic congregations were among “the last to close and the first to reopen in-person” services, according to the study. Conservative congregations (71%) were more likely to say they planned to reopen by August than liberal (20%) or moderate (49%) congregations.

The Rev. Charlie Dates, pastor of Progressive Baptist Church in Chicago, said his congregation has no plans to meet in person for the foreseeable future. The church moved services online in April, after the death of Edward Singleton, a beloved church member and Chicago firefighter in his 50s.

“That was a bell tolling in our church,” Dates said. “We have had a slew of deaths. There are just a lot of grieving people.”

But the lack of in-person meetings hasn’t dampened members’ commitment to the church’s mission. On Wednesday (Sept. 30), Dates was waiting for a weekly delivery of 1,200 boxes of food for the church to distribute to neighbors in need. The church is in the process of acquiring a food truck that will help in that process.

“Right now people have to come to us to get the food,” he said. “We want to make it so we come to them.”

Current plans call to stay online at least through Easter of 2021.  Part of that is the health care challenges that his congregants face. Not everyone in their community has access to health care or regular medical treatment. So church members may have underlying conditions that they are not aware of. Those underlying conditions could be life-threatening if church members get COVID-19.

“To bring them into a community at risk is not something that we want to do,” he said.

At Raleigh Mennonite Church in North Carolina, no one is ready to worship in person, said the Rev. Melissa Florer-Bixler.

Heathy church members could come to an outdoor service. But older members or those with underlying conditions would be left out. And that didn’t seem right.

“We can’t really be church until everyone in our community can meet together,” she said. 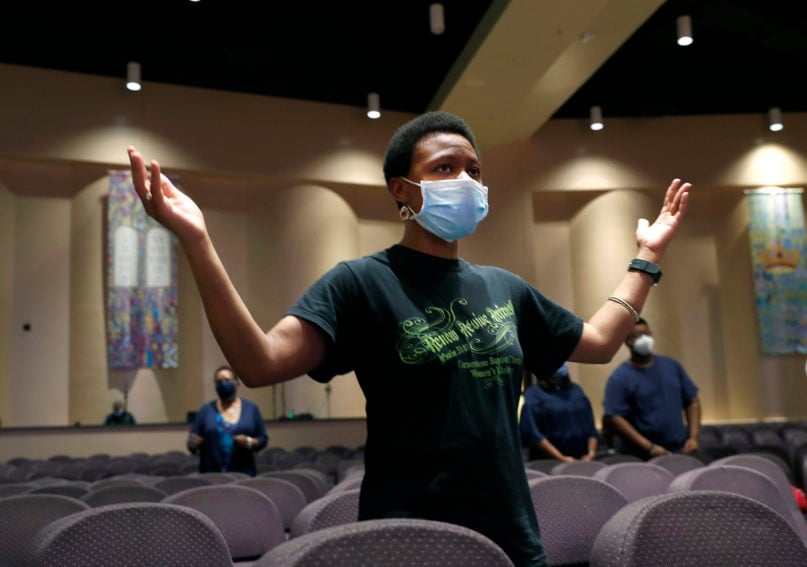 Valerie Hines worships during services at Cornerstone Baptist Church in Arlington, Texas, on June 7, 2020. After weeks without in-person services due to the coronavirus pandemic, the church opened for worshippers to attend services. (AP Photo/LM Otero)

The Rev. Jason Poling, priest-in-charge at St. Andrew’s Episcopal in Pasadena, Maryland, about half an hour outside of Baltimore, said his congregation began to meet in person again in June. The church is a “family-sized parish” of about 40 people, he said, with a building that could seat 250. So there’s enough room to safely social distance.

Everyone wears a mask and there’s no congregational singing, though there is a cantor. Poling distributes the Communion hosts, which are kept covered until Poling drops them into parishioners’ hands while wearing gloves. Giving and offerings to the food bank have remained strong, Poling said.

But there are shortfalls that may not show up in studies like the Lake Institute’s. Poling expects the church won’t be able to participate in an interfaith ministry to the homeless called Winter Relief, which houses homeless in area churches each year from November to March. Social distancing rules mean the church won’t likely take its weeklong rotation this year.

“We can’t do it,” he said. “It’s just not safe. We don’t have enough room for people to be 6 feet apart. Our church is not big enough.”

King said that other nonquantifiable worries include fatigue among religious leaders.

“Religious leaders have been really exhausted by all the work they’ve had to do over these past months,” he said. “And continued uncertainty makes it difficult to plan for the future.”

Still, he remains pleasantly surprised at how congregations have responded so far. Congregations, he said, are known for disagreeing about everything from the color of the carpet to human sexuality, he said. But during this pandemic, folks have worked together rather than arguing.

King said he found the results of the study hopeful.

“It leaves many congregations with greater reassurance that we’re all in this together,” he said.