(RNS) — Muslim support for President Donald Trump nearly doubled in 2020 compared with a year ago, with 30% of Muslims willing to vote for the president, a new poll shows. Muslim Americans are also more likely to report satisfaction with the direction of the country, according to the survey.

But the fifth annual Institute for Social Policy and Understanding poll shows Muslims still overwhelmingly prefer Democrats in the White House over Republicans. Asked during the primary season in March and April who they would vote for if the presidential election were being held that day, 51% of Muslim respondents said they would choose a generic Democratic candidate, compared with 16% who said they would support a Republican. The ISPU is a research organization dedicated to studying Muslim Americans.

Muslims, in fact, appeared to be the religious group least likely to support Trump in 2020. Jewish Americans came in as the second least likely, with only 34% favoring the president. The only group that showed less support for the president than Muslims was Americans who are unaffiliated with any faith (23%).

Dalia Mogahed, director of research at the ISPU, said the doubling of support for Trump this year — from 16% in 2019 to 30% in 2020 — may be related to the timing of the poll. “It was done right at the beginning of the coronavirus lockdown,” Mogahed said. “When there’s a national crisis, people tend to rally around the leader or the flag.” 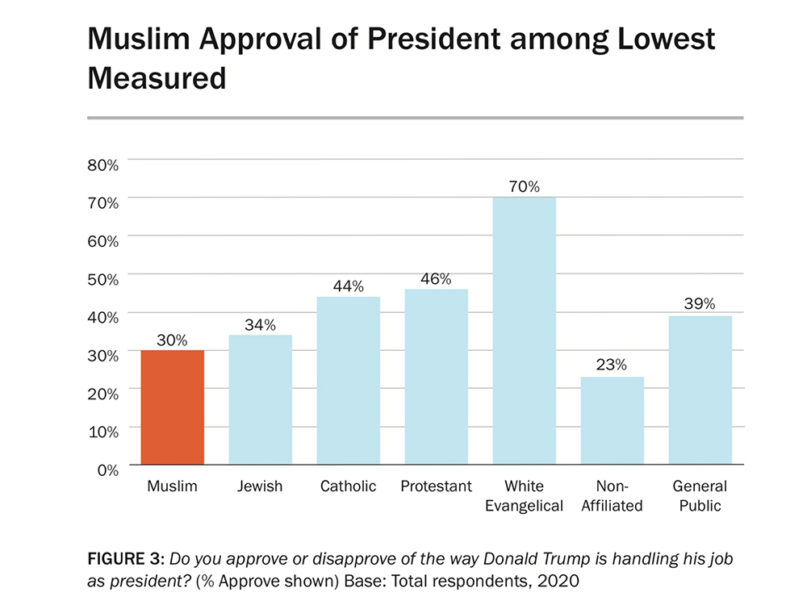 The poll included a nationally representative sample of 1,015 Americans, plus 801 Muslim American respondents and 351 Jewish American respondents. The margin of error for the full sample was plus or minus 3.7%, for Muslims it was 4.8%, and for Jews 7.2%.

The poll also showed that support for Trump was higher among white Muslims. Nearly one-third of white Muslims (31%) said they would vote for Trump, compared with 8% of Black and Arab Muslims and 6% of Asian Muslims.

“There’s a stark difference between white and nonwhite Muslims,” Mogahed said. “Muslims who identify as white help to explain the rise in approval for the president” year over year.

On social issues, Muslims do not fall into neat liberal-conservative camps. When it comes to Black Lives Matter, a strong majority of Muslims are on board. ISPU’s poll showed that 65% favored building alliances with the Black Lives Matter movement, more than any other faith group surveyed. (Notably, the survey was taken before the killing of George Floyd by police and the national protests that followed.) 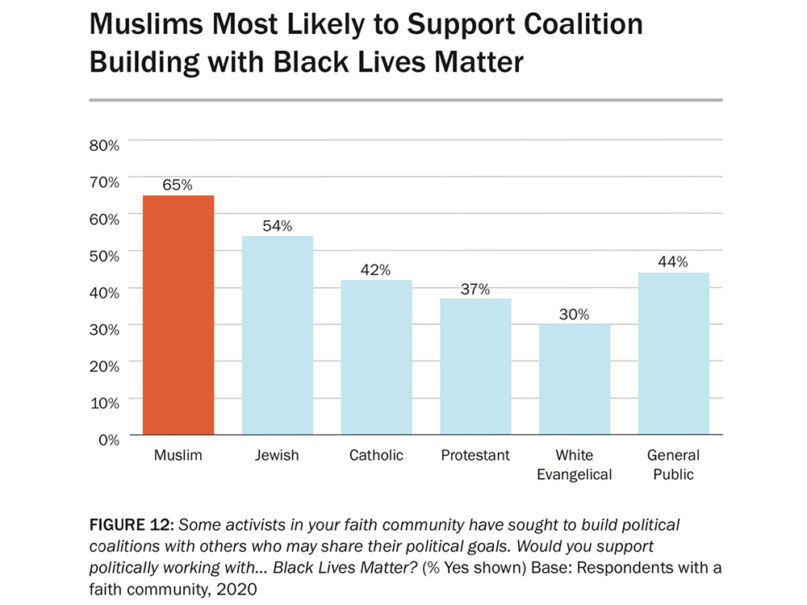 On other issues, Muslim Americans take a more socially conservative stand. A majority (55%) said they would​ not​ favor political alliances with LGBTQ activists (though younger Muslims were more supportive). Muslims are more likely to support alliances with abortion opponents than Jews and Catholics, and nearly half of Muslims support alliances with religious liberty advocates.

As of March, 78% of eligible Muslim voters said they were registered to vote, and 81% said they planned to vote. That’s lower than other faith communities such as evangelicals (92%) and Catholics (91%).

“The greater danger to the Democratic Party is not so much the conversion of Muslim voters to the Republican side, but rather an apathy or disillusionment that culminates in Muslims not voting and sitting it out,” said Engy Abdelkader, who teaches about religion and race at at Rutgers University and serves as a fellow at the Public Religion Research Institute.

About a quarter of Muslims living in America cannot vote because they are not citizens.

The frequency of religious discrimination faced by Muslim Americans has held steady for five years, with 60% to 62% of Muslims reporting that they faced discrimination in the year prior to the survey. (By comparison, 58% of Jews, 26% of Catholics, 29% of Protestants and 43% of white evangelicals said they’ve experienced discrimination.) More than any other faith group, Muslim Americans reported religious discrimination at airports, in encounters with law enforcement, in health care settings and when applying for a job.

“Institutional religious discrimination is something Muslims are unique in experiencing,” said Mogahed. “This is an important factor. We think of bigotry as interpersonal, but it’s also institutional.”