(RNS) — In normal times, a college campus can be an overwhelming place for Muslim students. On top of the usual pressures of assignments, they face the social pressure of being different: stereotyping, misunderstandings and micro-aggressions can come from faculty, peers and even non-Muslim friends. Above all there is the exhausting expectation that they are responsible for educating the campus about Islam.

For many, their refuge is a Muslim student association, where they can feel at home and not stand out for anything but being themselves. The associations also give students the opportunity to grow spiritually — and make raising awareness of Islam among the larger student body a collective project.

“I joined MSA because I was looking for a community,” said Misbah Farooqi, a member of Columbia University’s Muslim Student Association who took over as president this fall. “It’s just been a really great way to meet a variety of different Muslims from all over the world and who’ve grown up with different experiences. It’s allowed me to not only grow my own faith but also make a lot of friends and have a really good time.”

Since the pandemic hit, however, many university MSAs are struggling to maintain that community feeling.

Columbia’s classes and student organizations have been virtual since the pandemic hit in the spring semester, and when it became clear that her term as the head of the school’s MSA would be changed radically by the pandemic, Farooqi and her executive board adapted by connecting its 200 members in new ways.

Farooqi and her board shifted their meetings to Zoom and planned events to fit the new normal. This fall’s weekly religious gatherings with the university’s Muslim chaplain, known as halaqas, were moved to Zoom, along with speakers and social mixers. The “welcome back” dinner and the accustomed lunches after Friday services became “Halal kitchen: Quarantine edition,” in which members share their recipes and their culture’s foods via Zoom.

But beyond keeping up their schedules, MSAs are concerned with keeping up morale among members who can’t meet in person — with each other or at all.

At Purdue University, MSA President Sabriya Alam and Vice President Naseeha Mohammed realize members are managing their new online classes so they’re putting a premium on events that are fun and de-stressing. “We want it to be something to look forward to instead of just like another to-do list item,” Mohammed said.

Spiritual events include “Wednesday Wisdom” series where members submit topics of discussion and “Islamic Comfort,” which addresses how to deal with loneliness. Social events have been trickier, but movie and game nights have kept the community interaction alive.

Another goal for Alam and Mohammed is making sure incoming freshmen are involved and engaged. Instead of their usual in-person invitation to first-year students, they’ve instituted a “big, little program,” in which upperclassmen are paired with underclassmen for companionship.

At the University of Illinois, where the first MSA in the U.S. was founded in 1963 and now boasts about 175 members, its president, Mustafa Ali, said pulling in freshmen can be a struggle: There are only so many games members can play online.

Meeting remotely can also inhibit socializing, not least because some newcomers opt to keep their computer cameras off, reducing interpersonal interactions between new members and old.

“I think it’s difficult for everyone, both members and executive combined, because there’s no guidebook for how to run an MSA in a pandemic,” said Ali. “This is the first I’m sure we’ve all been dealing with (it), so we’re just playing it by ear.” 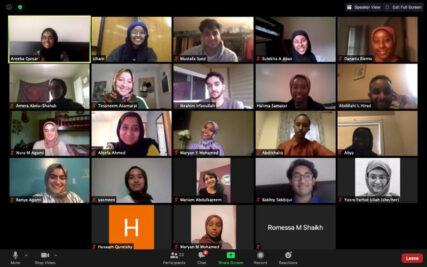 The Muslim community provides feedback about services and needs during the pandemic to the University of Minnesota Muslim Students Association via Zoom. Screengrab submitted by Abdimalik Ahmed

The MSA at the University of Minnesota, which draws as many as 1,000 students to its newsletter and Facebook account, is also dealing with cancellations and delays.

The head of Minnesota’s MSA, Abdimalik Ahmed, said funding for events has been delayed by the need to organize new events to fit the new normal. “In the current climate, everyone is just responding to things as they come and morphing situations as you’re faced with them,” Ahmed said. “That’s sort of how we’ve released our foot off the pedal to slow down and to just take things one step at a time.”

The greatest impact, perhaps, has been on Islamic Awareness Week, a popular national gathering of Muslim students from across the U.S. The annual event normally lasts a week, with an activity each day that promotes knowledge and understanding of Islam. Each MSA has its own set of activities for the week, including guest speakers, an iftar dinner and “hijab booths,” where women can get a free traditional Muslim head covering and learn how to wear it.

None of these allow much room for social distancing, so MSAs have either canceled or modified the event this year to weeklong webinars, like Purdue’s webinar speaker series on standing against oppression in the Muslim world.

There have been a few silver linings to the pandemic. Columbia’s online programming has helped that MSA to collaborate with other MSAs across the country to get more diverse speakers at a reduced price.

“It’s allowed us to foster relationships with other MSAs on the East Coast and also around the country,” Farooqi said. “That’s one of the things we’re hoping to continue, just to build that network.”

Purdue and Illinois have even seen an increase in attendance for some of their events compared with before the pandemic, and Ali and his board have discussed keeping those events online to allow their members to participate from the comfort of home if they prefer.

The University of Minnesota’s virtual programs have attracted attendees from as far away as Nigeria and Saudi Arabia. Now, even small events that might draw as few as five people have been averaging more than five times that.

“If you’re creative about it and not everything is on Zoom, there are ways that really make use of the online space,” Ahmed said. “I want to translate that same wonder and excitement into all of our events and always be pushing the envelope a little further.”