(RNS) — One of the difficulties of gauging religion through opinion surveys is that for most people, matters of faith can often be amorphous concepts that are nearly impossible to boil down to specific questions.

For instance, some surveys show that there has been a dramatic increase in the number of people who claim that they are spiritual, but not religious. It’s hard to design survey questions that go beyond these categories: What does “spiritual” encompass, and how is it really different from “religious”? A survey can be a blunt instrument when it comes to refining ideas like this.

Luckily, the Fetzer Institute put a survey into the field in 2020 that approaches these questions from a slightly different angle: a focus on comparing spirituality to religion and how those vary based on political partisanship. By tying these terms to our party divisions, we might gain more knowledge about what spiritual versus religious means in real terms.

Fetzer also generously made the survey data available on the Association of Religion Data Archives website, allowing social scientists to take a peek into how partisanship shapes how individuals view matters of spiritual concern in regard to the 2020 presidential election.

Respondents were asked to describe their partisan affiliation along a seven-point scale, ranging from “strong Democrat” to “strong Republican” with “Independent” in the middle. But then they were asked to check boxes beside 14 different words that describe “what spirituality offers (them), personally.” The results are fascinating, indicating that in some ways spirituality is universal, but it’s a concept that is tinged by partisanship. 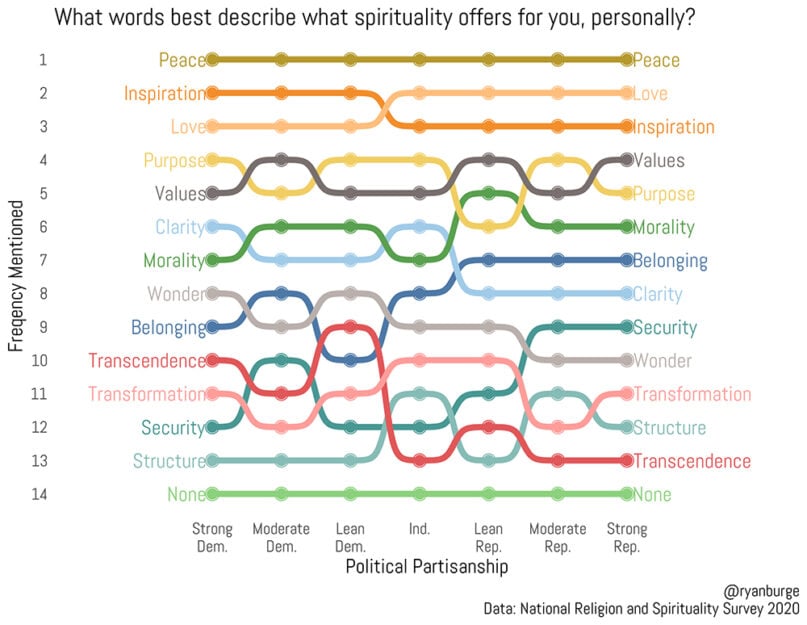 “What words best describe what spirituality offers for you, personally?” Graphic by Ryan Burge

It’s clear that there are several concepts that seem to defy partisanship. For instance, peace, love and inspiration are all terms that come to mind frequently for people of all political backgrounds. Other terms, like “purpose” and “values,” arise frequently as well.

However, there are some dimensions of spirituality that seem to show partisan influence. “Belonging” ranks consistently lower for Democrats than it does for Republicans. This could be related to the fact that many Democrats are religiously unaffiliated, thus don’t feel  a strong sense of connection with others when it comes to spirituality.

Another term that seems to deviate based on partisanship is “transcendence,” which came in 10th among the words Democrats mentioned; for Republicans it was 13th. This could be due to the fact that most Republicans affiliate with Christianity, a religion that doesn’t speak much about the concept of transcendence, while many Eastern religions (which are more prevalent among Democrats) place transcendence at the center of spirituality.

The survey also asked respondents how close they felt to other parts of the human experience. Three questions asked about closeness to a higher power, all of humanity and the natural environment. These types of questions are valuable because they differentiate spirituality based on a more vertical orientation (an individual’s relationship with the divine) with an orientation that is more horizontal (closeness to other human beings, closeness to nature). 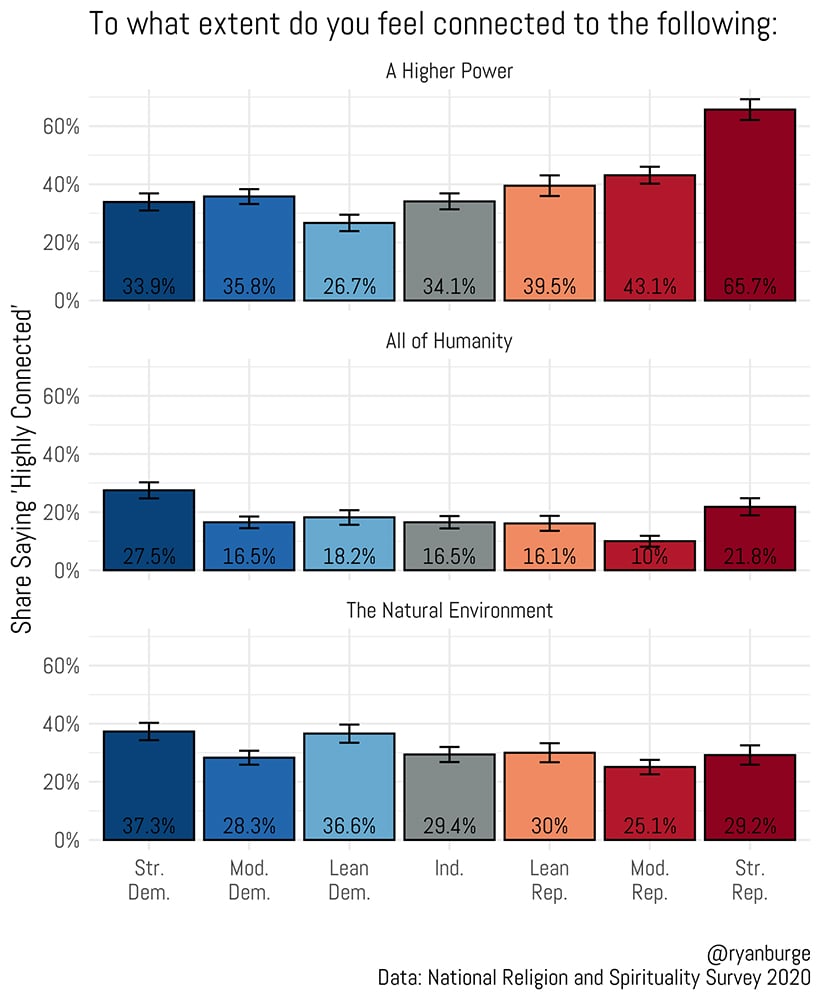 There is not as much differentiation here as one might guess, given the pervasive partisanship in the American psyche at the moment.

Given that Democrats often have a more collectivist mindset, putting the group over the individual, this seems surprisingly low. What’s also notable is how little variation there is on the last statement, concerning a connection with nature. The difference between Republicans and Democrats is less than 10 percentage points.

Finally, it seems worthwhile to consider how people weigh the importance of party adherents’ religion versus their spirituality. Clearly, Republicans see both concepts as more influential in their lives than Democrats. Less than half of Democrats agree with the statement that “my religion influences my worldview,” compared with nearly two-thirds of Republicans.

But when the scope of the question is switched to spirituality, instead of religion, greater influence emerges. For Republicans, the increase in agreement is about 6 points; for Democrats it’s triple that.

The results of this survey paint a subtle but compelling picture of how the “God gap” may actually be better defined as a spirituality gap. It seems that Republicans on average are more closely aligned with traditional religious structures, oftentimes Christianity. At the same time, Democrats seem to lean more heavily on the amorphous concept of spirituality than they do on more mainstream religious structures.

Yet there are reasons to remain hopeful. Despite the stark polarization happening in American society, people of all political persuasions still seem to be drawing the same inspiration from spirituality: a focus on peace, inspiration and love. We will need all of those in abundance to heal many of the wounds inflicted by the 2020 presidential campaign.

Donate Now!
Posted in
Ahead of the TrendChristianityFaithOpinionPolitics