(RNS) — “This is not a normal white girl conversation,” said Lisa Sharon Harper, founder and president of Freedom Road.

She’s referring to the topics being covered during the Ally Virtual Tour, which kicked off Monday (Oct. 5) and brings together a number of female Christian leaders online to discuss faith, gender, race and politics in the countdown to the 2020 presidential election, just weeks away.

The idea for the Ally Tour came out of conversations — full of “aha” moments about the divides between white women and women of color — that Harper, who is Black, had about a year ago with her white friends, she told Religion News Service.

In 2016, 94% of Black women and 68% of Latina women voted for Hillary Clinton, she noted. Meanwhile, 53% of white women voted for Donald Trump, even after he was caught on tape bragging about grabbing women’s genitalia.

With not just another divisive presidential election looming, but also the daily realities of a pandemic and protests over police shootings of Black people, Harper decided the kinds of conversations she was having needed to be public.

RELATED: Will evangelical women turn the tide against Trump?

“It’s too important,” she said, while introducing the first night of the tour. 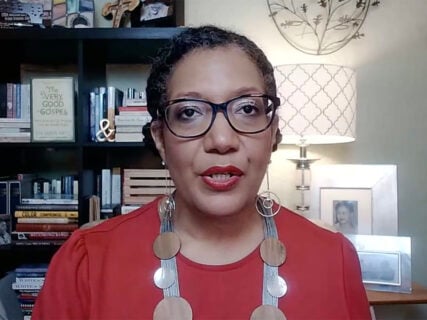 “The stakes are too high, and there’s so much that we don’t understand because we don’t talk. We don’t have the conversations.”

Originally planned as a four-city tour this spring, the Ally Tour moved online amid the uncertainties of the COVID-19 pandemic. Instead of four different cities, the Monday night discussions will span four different topics through the end of the month.

About 1,500 women registered to virtually attend the first night of the tour.

Many are asking honest questions about difficult topics.

Harper hears from them on social media, she said, pointing to interactions she’s had with white, conservative Christian women who tell her they are listening and learning. She also noted the overwhelming response to a Facebook Live video on “White Women’s Toxic Tears” she filmed with popular Christian author Jen Hatmaker, who is white, after the death of George Floyd, a Black man who was killed when a policeman kneeled on his neck for about eight minutes.

Other recent events — such as seeing children separated from their parents at the United States-Mexico border and a viral video of a white woman calling the police on a Black birdwatcher — have offered many white women a “glimpse of the matrix,” she said.

“I know there is a conservative audience that voted for Trump in 2016 that is listening, that is watching and that is hungry. They know something’s wrong,” Harper said.

“We want to help them to think about it through the lens of faith.”

The first night of the tour set the stage for those discussions with a focus on truth.

“So much is happening where people don’t really want to hear the truth or something that is verifiably true. It is more: ‘If it’s true to me, then it’s true, and so then I find echo chambers that reaffirm that,’” said the Rev. Brenda Salter McNeil, associate professor of reconciliation studies at Seattle Pacific University, during Monday’s discussion. 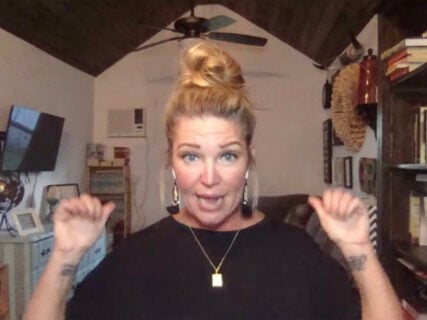 For many, those realizations came when their experiences didn’t match what they were taught — or when they learned a new fact that didn’t fit into a neat narrative.

Hatmaker said she was in her late 20s before she learned about the internment camps in which the U.S. held Japanese Americans during World War II. She was “disoriented,” not realizing such a thing could happen in her country, and she wondered what else she hadn’t been taught — or had been taught incorrectly.

Those awakenings are hard, speakers admitted.

For Christians, that’s part of the conversion process, according to Salvatierra, assistant professor of mission and global transformation at Fuller Seminary.

That doesn’t mean Christians will always agree on everything, but Bolz-Weber wondered aloud if it was possible to appreciate those different perspectives.

“Is there a way of having actual gratitude for what that brings, rather than just contempt?” she asked.

Bolz-Weber pointed out how many conservative churches left the ELCA when the denomination changed its policies in 2009 to allow the ordination of LGBTQ clergy. She said she thinks their departures make the ELCA weaker as a denomination.

That’s because, she said, “I don’t see eye to eye with them, but they’re going to call me to questions that my fellow liberals will never call me to, and what if we need the right and the left wing to fly?”

The Oct. 5 event will be followed by three additional sessions over the course of the month. The scheduled topics are “Wedged Issues or Wedged Women?” (Oct. 12), “White Power vs. Women’s Power” (Oct. 19) and “The Call to Radical Friendship” (Oct. 26).

Between events, the Ally Tour is continuing conversations and sharing resources with attendees in a private Facebook group.

Salvatierra told RNS afterward she was hopeful about the impact these kinds of conversations can have.