(RNS) — The divisions that the coronavirus pandemic has caused in the United States — with some viewing social distancing restrictions as sensible and altruistic while others decry them as infringements on our freedoms — have been blamed on everything from political parties to toxic masculinity.

But a group of academics say there may be an even more powerful driver of the disagreement: Christian nationalism.

Perry and his colleagues, such as Andrew Whitehead of Indiana University and Joshua Grubbs of Bowling Green State University, argue in a series of new papers that Christian nationalism is either the single best predictor or a top predictor of whether a person will flout social distancing recommendations, be skeptical of science, find nothing racist about calling COVID-19 the “China virus” or argue that lockdown orders threaten the economy and liberty — all while de-prioritizing the threat to the vulnerable.

“Christian nationalism is knocking out all of the competition in terms of factors that influence these things,” said Perry, who co-authored the recent book “Taking America Back for God: Christian Nationalism in the United States” with Whitehead.

According to Perry, even partisanship can take a back seat to fusions of God and country: “The partisan identification — Republican, Democrat — doesn’t matter as much as this underlying ideology of whether or not you feel like the nation is rightfully yours and is under threat,” he said.

Perry and his colleagues’ findings draw primarily on data pulled from the Public and Discourse Ethics Survey, which polled Americans in August 2019, February 2020 and May 2020. They are also able to compare it to 2007 data from the Baylor Religion Survey.

The authors say the result homes in on a group of people who ascribe to “an ideology that idealizes and advocates a fusion of American civic life with a particular type of Christian identity and culture.”

One of the studies examined the data and concluded that Christian nationalism was the attribute most associated with Americans who said they would engage in several “incautious behaviors” such as eating in restaurants, visiting family and friends, or gathering with groups of more than 10 people.

Other predictors of this kind of behavior trailing Christian nationalism were youth and identifying as male or politically conservative. 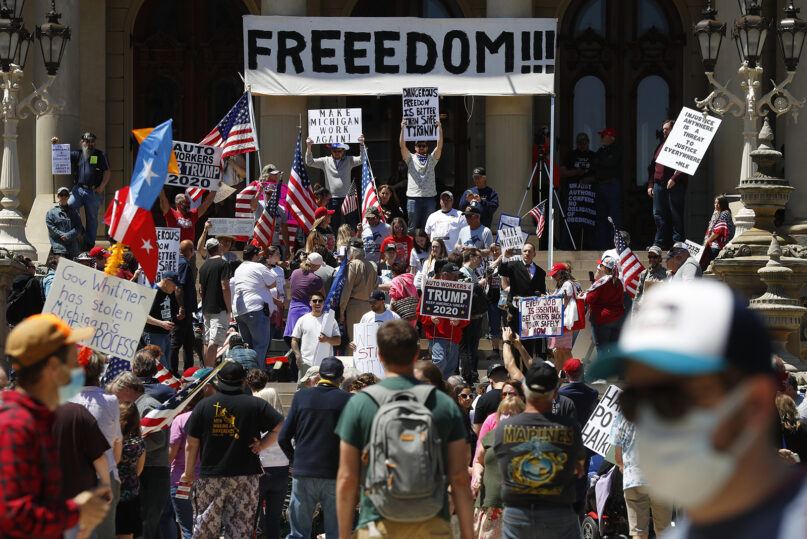 People protest pandemic lockdown orders at the State Capitol during a rally in Lansing, Michigan, Wednesday, May 20, 2020. (AP Photo/Paul Sancya)

Christian nationalism was also the second leading predictor of whether someone would engage in precautionary measures, such as social distancing, wearing masks and washing hands.

Asked to explain the trend, Perry pointed to an emerging crisis of authority. When asked who they trust for information regarding the pandemic — including medical experts and the Centers for Disease Control — people who scored high on his team’s Christian nationalism index chose Trump “by a landslide,” followed by religious organizations and Republicans.

In a separate paper, Perry and his colleagues argue that Christian nationalist views were also a striking predictor of affinity for xenophobic or racist arguments. Besides not scrupling to call COVID-19 “the Chinese virus,” respondents were more likely to back restrictions on immigration as a method of controlling the pandemic and blame minority groups for the high infection rates within their communities. They also expressed a preference for protecting an idea of liberty and, more than any other category, said they did not want to prioritize the most vulnerable when considering social distancing restrictions.

Perry said these impulses are a byproduct of the ideology’s exclusive nature.

For Christian nationalists, he said, the answer to such questions often seems to be white Christians.

It remains to be seen how Christian nationalists will respond to news that Trump — who has long invoked Christian nationalism when appealing to his base — was hospitalized for contracting COVID-19. But Perry expressed doubt the situation would change many minds. 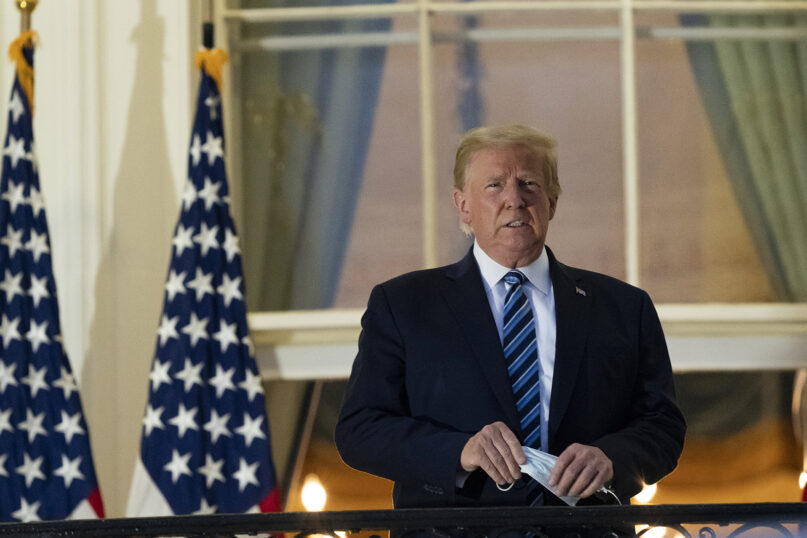 President Donald Trump removes his mask as he stands on the Blue Room Balcony upon returning to the White House on Oct. 5, 2020, in Washington, after leaving Walter Reed National Military Medical Center in Bethesda, Maryland. Trump announced he tested positive for COVID-19 on Oct. 2. (AP Photo/Alex Brandon)

Even so, Perry was quick to note that Christian nationalism often functions as a social identity that is not inherently connected to the tenets of the religious tradition whose name it bears. In fact, religious devotion of any kind often had the opposite effect to Christian nationalism, and was the leading predictor of whether someone would take precautionary measures.

He said the same was true for issues of xenophobia and race; religious devotion indicated that people were less likely to blame COVID-19 on immigrants or accuse racial minorities of being more likely to get the disease because they are behaving irresponsibly.

“It’s a fascinating paradox: It seems like in just about every study that we do, once we account for Christian nationalism, it actually makes religious commitment jump in the opposite direction,” he said.

He added: “In other words, (religious people) tend to look like pretty good neighbors.”

Donate Now!
Posted in
Ahead of the TrendChristianityFaithNews