(RNS) — I know that the relationship between religion and culture is shifting when something happens that shocks even my 17-year-old daughter.

Last week, the popular singer Rihanna, whose fashion brand, Fenty, has been applauded for its championing of diversity in the products it makes and the models it employs for its ads and on the runway, faced backlash for playing a controversial 2017 song, “Doom” by Coucou Chloe, during her latest Savage X Fenty fashion show. The song, to which models in lingerie danced at the Oct. 2 show, includes a sacred Muslim text from a hadith about the Day of Judgment.

“Mamma,” my daughter said at dinner, “did you hear about what happened at Rihanna’s fashion show? Wow.”

For a Muslim American teen, the juxtaposition of women strutting in revealing lingerie and an Islamic hadith — a verified saying of the Prophet Muhammad — was a little too jarring.

For Muslims, hadiths are guides for living life. They combine sayings of the Prophet Muhammad with accounts of his daily life practices (sunnah). Muslims draw on hadiths (which must be authenticated from verified sources, and which break down into strong and weak hadiths — but that’s another story) when we contemplate, for example, how we should treat our neighbors, or why our charitable giving should be so secret that the left hand doesn’t know what the right hand giveth. As sacred texts, they come only second to the Quran.

Rihanna quickly apologized, calling the use of the song “irresponsible” and an “honest, yet careless mistake” in an Instagram post. Chloe said on Twitter: “I want to deeply apologize for the offense caused by the vocal samples used in my song ‘Doom.’ The song was created using samples from Baile Funk tracks I found online. At the time I was not aware that these samples used text from an Islamic hadith.” 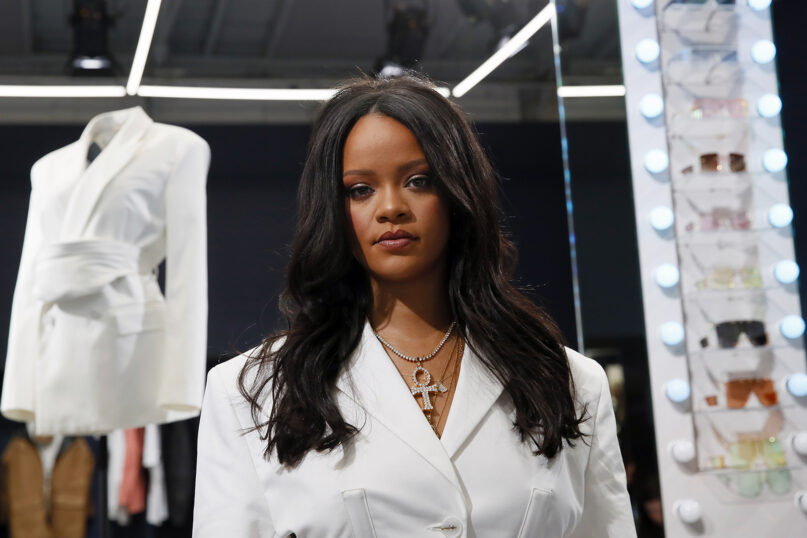 Rihanna poses as she unveiled her first fashion designs for Fenty at a pop-up store in Paris on May 22, 2019. (AP Photo/Francois Mori)

This wasn’t the first time Rihanna has been accused of being “disrespectful” toward Islam. In 2013, she was asked to leave a mosque in Abu Dhabi after staging an “inappropriate” photo shoot.

Nor is she the first artist to use Islamic texts or iconography as part of their work. Just last year the singer French Montana, who identifies as Muslim, featured niqab-wearing women in thigh-high red boots on his “Montana” album cover.

For years musicians, visual artists, comedians, cartoonists and advertisers have used the sacred in their art or to sell products. Christianity, Judaism, Hinduism, Buddhism and other faiths have all seen their texts, holy figures and imagery used and abused by art and fashion. Islam and Muslims have not been spared either but still enjoy — to some degree — a bit more protection.

But it raises the question: Is religion too sacred for art? How much has our Muslim faith been co-opted for art, and what difference does it make if it’s a Muslim artist doing it as an exploration of their own roots versus an artist who is not Muslim drawing from Islamic text and imagery as part of their art?

Michael Muhammad Knight, author of “Muhammad’s Body,” is an assistant professor at the University of Central Florida and a scholar who studies the sacred and the complications of respecting people’s sacred imagery. When I called him to talk about about Rihanna, Knight pointed out that there is no universal “Muslim ruling or feeling” on how Muslim texts and imagery may or may not be used as a part of art.

“Who really has custody of those things?” he asked. “It’s a little ridiculous to presume one single universal Islamic position on whether that is OK or not.”

But he said the point he is making with his students is that there is no definitive law against the use of the Prophet’s image, only deeply held sacred tradition. “What Muslims can do or be, what counts as Islamic is so historical,” he said.

RELATED: To beat Trump, the ‘good Muslim, bad Muslim’ messaging has to end

Sometimes music and art themselves become entwined with religion, Knight said, because of shared historical roots. This is the case with hip-hop, the genre that Chloe sometimes dabbles in. “The archive of hip-hop art includes a lot of Islamic material that goes through a very specific historical filter that a lot of Muslims wouldn’t even recognize,” the professor said.

For me, and for many fellow Muslims, it comes down to (as Knight points out) how you were raised and taught your faith as well as context. Mixing verses of the Quran or hadith or images of the Prophet Muhammad/his companions into artistic or commercial work that could be profane or disrespectful was always discouraged in my home. But it’s impossible to expect this as the standard bearer, as Knight points out. People of any religion should, however, expect understanding, thoughtfulness and, yes, respect for how their Scripture and holy figures are interpreted and used (or abused) in art or a marketing ploy.

Given Islam’s emphasis on internal and external modesty of character, behavior and appearance, the Fenty fashion show was more than bad optics. Pairing a hadith with a lingerie show violates principles of Islam that Muslims have a right to protect. But as importantly, Rihanna is not a Muslim.

That matters. As Muslim artists explore their own roots and tap into religious icons and text for artistic purposes, it becomes trickier. As Islam finds its comfort zone in the diverse Western world, we need to ask ourselves what place Islamic imagery will take in our own discussion of our faith. French Montana’s album cover rubs me the wrong way for its own reasons —  it fetishizes and objectifies Muslim women — but as hard as it is for me to see it, Islam is his to discuss. I don’t have to like it, though. Opinion
Atlanta suspect blamed women for ‘tempting’ him. Purity culture does the same.