President Donald Trump holds a Bible as he visits outside St. John’s Church across Lafayette Park from the White House on June 1, 2020, in Washington. (AP Photo/Patrick Semansky)

(RNS) — One of the standout images of contemporary politics is that of President Donald Trump, probably the most profane person to ever occupy the White House, holding a Bible in front of a boarded-up St. John’s Lafayette Church, a sign to his evangelical Christian supporters of his unwavering bond with them.

That bond hangs on the president’s championing of evangelicals’ pro-life beliefs. It’s that same impulse that has brought Amy Coney Barrett, a conservative Catholic, to the doorstep of the Supreme Court. Regardless of the president’s personal morality, the argument runs that Trump backs “biblical values” and so can be viewed as an agent of God.

It’s worth noting at this pass in American history that the supposed “biblical values” he champions often have little basis in the Bible. This disconnect is nowhere more evident than in the debate about abortion and the supposed “right to life.”

The Bible’s ambivalence on the subject of a right to life begins in its first book, Genesis. In chapter 9, God tells Noah after the flood: “Whoever sheds the blood of a human, by a human shall that person’s blood be shed, for in his own image God made humankind.”

RELATED: Winning the hearts and minds of Catholics in a church divided

Since human beings are created in the image of God, life is protected, but the penalty for bloodshed is more bloodshed. God can even demand human sacrifice on occasion, most famously in the case of Abraham and Isaac, and the death penalty is routinely in the Bible for all sorts of offenses. The Bible, in fact, lacks any discourse of human rights. Life is a gift from God: The Lord giveth, and the Lord taketh away.

The debate about a right to life is not primarily concerned with the death penalty, however, but with abortion. Given the importance conservative Christians, Catholic and Protestant, have granted abortion in recent years, some might assume that their own opposition stems, in some way, from biblical teachings. But in the entire corpus of biblical law, abortion is never mentioned. 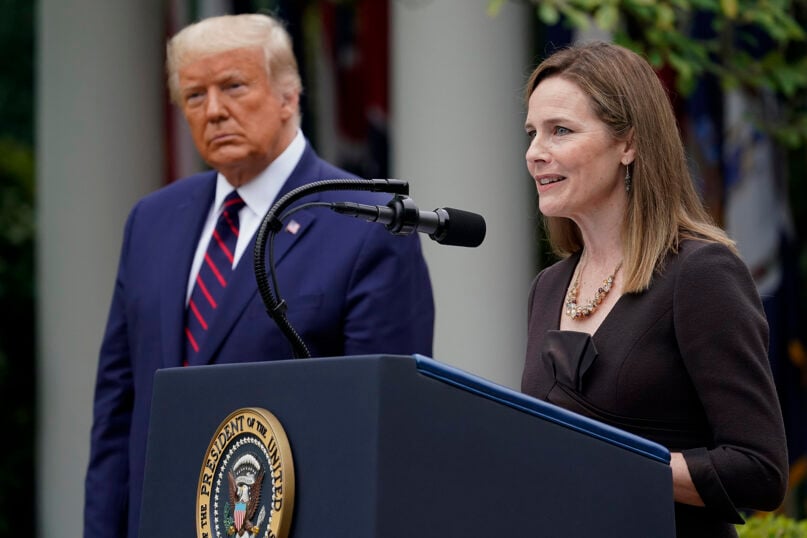 Judge Amy Coney Barrett speaks after President Donald Trump announced Barrett as his nominee to the Supreme Court, in the Rose Garden at the White House, on Sept. 26, 2020, in Washington. (AP Photo/Alex Brandon)

The practice was certainly known in antiquity. A prescription for abortion can be found in an Egyptian papyrus dating back to the 16th century BCE. The only people in the ancient Near East who explicitly condemned it were the Assyrians, who were primarily known for their cruelty in war rather than for their humane concerns about the lives of the vulnerable.

Abortion was known, at least as a possibility, in Israel. The prophet Jeremiah curses the day he was born and the man who brought the news to his father, “because he did not kill me in the womb so my mother would have been my grave.”

Yet there is no law in the Bible forbidding the practice.

The text that served as the basis for later discussion in Jewish tradition is in Exodus, whose 21st chapter reads (in Hebrew): “When people who are fighting injure a pregnant woman so that there is a miscarriage, but no other harm occurs,” there is a financial penalty.

The Greek translation of this verse is quite different, in line with Greek views about the beginning of life: “If two men fight and strike a pregnant woman and her child comes out not fully formed, he (the striker) will be forced to pay a penalty. But if it is fully formed, he shall give life for life.” A person who kills a “fully formed” baby is subject to the death penalty, as a murderer would be. If the baby was not fully formed, the penalty is financial, as was typical for property crimes.

This translation has been interpreted to mean that by implication, the permissibility of abortion, too, depends on whether the fetus is fully formed.

On the issue of when the fetus reaches this stage, opinions have fluctuated through the centuries. In later Jewish tradition, which is based on the Bible but tries to fill in the gaps where the Bible is not explicit, the issue is often whether the greater part of the head has emerged. If it has, abortion is no longer an option. In some cases, the baby has only been deemed a person when it is fully born. Modern medicine permits greater awareness of stages of development within the womb.

An accidental miscarriage, of course, is not the same thing as an intentional abortion. As far as abortion itself goes, the Jewish historian Josephus, writing at the end of the first century CE, claims that the Law of Moses — that is, the first five books of the Hebrew Bible or Old Testament — forbids abortion and regards it as infanticide, but there is no such law in the Bible.

More typical of Jewish tradition is the Mishnah (a collection of laws based on oral tradition, written down about 200 CE), which allows abortion in the case of hard, potentially life-threatening labor, since the life of the mother takes precedence over that of the child.

There is no discussion of abortion in the New Testament. The first explicit condemnations of abortion in Christian tradition appear in the second century CE in the Didache, a writing that claims to be based on the teachings of the apostles, and the Epistle of Barnabas, another early Christian work, modeled on the letters of Paul.

While the Bible does not forbid abortion, it does not permit it either. It simply says nothing about it. Perhaps it was not widely practiced. It was a dangerous procedure, not to be undertaken lightly. Children were generally regarded as a blessing and childlessness as an affliction.

But for whatever reason, the Bible provides no definitive ruling on the subject. It neither affirms a right to life for the fetus nor a woman’s right to choose.

Such putative rights have a place in modern discussion. Everyone in the modern world, regardless of religious commitment, is shaped by the legacy of the Enlightenment, which gave us the discourse of human rights. Christians can point to a long tradition of condemnation of abortion, dating back to the period just after the New Testament, and may reasonably feel that this tradition carries weight.

But there is no line to be drawn from Trump’s Bible display to a Supreme Court justice who may overturn Roe. v. Wade — or rather no line that is not heavily overdrawn by politics. But Christians who turn to Scripture to trump a political debate with the force of biblical authority should be reminded that the Bible does not actually say anything at all on the topic. On this issue, there is no divine revelation to be had.

(John J. Collins is Holmes Professor of Old Testament at Yale Divinity School and author of “What Are Biblical Values? What the Bible Says on Key Ethical Issues.” The views expressed in this commentary do not necessarily reflect those of Religion News Service.)