(RNS) — As the number of laid-off workers and hungry Americans continues to rise, even as farmers are having trouble marketing their crops, the ancient practice of gleaning is having a moment — fueled in part by faith communities.

Gleaning, or collecting food left over after a farmer’s harvest, usually set aside for the poor, is familiar to many Jews and Christians from the Hebrew Scripture story of Ruth, the Moabite who meets her husband, Boaz, while gleaning to feed her and her widowed mother-in-law Naomi. In Leviticus the Scripture says gleaning is a divinely commanded way of feeding the poor and the stranger.

In recent years, gleaning has made a comeback as a solution to the problems of persistent hunger and the lack of fresh produce options for food pantry visitors, among other concerns. In 2018, about 37 million U.S. households were termed “food insecure” by the United States Department of Agriculture, with Black and Hispanic Americans affected out of proportion to the general population. At the same time, roughly 30% of food produced in the United States each year goes to waste, with 15% of solid waste being leftover food, according to a report from the National Academies of Science, Engineering and Medicine. 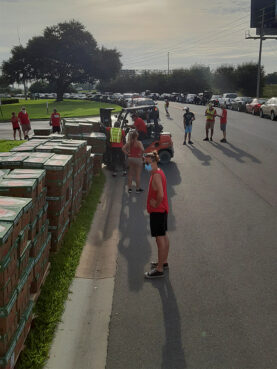 Cars line up for a Society of St. Andrew distribution event at Unite Here Local 737 in Orlando, Florida, on Aug. 29, 2020. Photo courtesy of Kelly Stainner Sizelove

The possibilities for hunger relief are what have drawn faith-based organizations and houses of worship to the practice.

“I can’t think of a gleaning group that doesn’t work with congregations,” said Shawn Peterson, a founding member of the Association of Gleaning Organizations, a networking group formed in 2019 to provide mutual support for organizations often headed by unpaid enthusiasts.

“Gleaning is a growing movement,” he said.

The Society of St. Andrew is probably the biggest farm-to-table faith-based agency engaged in gleaning. The brainchild of several United Methodist pastors’ families, it was founded in 1978 in Big Island, Virginia, near Lynchburg, and now has outposts across the Southeast United States and Indiana.

SoSA has created a food distribution network flexible enough to “work with whoever is closest to the food that has the capacity to use it,” said Andy Lemmon, the group’s marketing and communications director. Sometimes that is community food pantries and food banks, but just as often small groups of volunteers will identify and track down hungry families to bring food to.

In 2019, SoSA gleaning network, assisted by roughly 23,000 volunteers, distributed approximately 13 million pounds of produce, ranging from sweet potatoes and cabbage to citrus, peaches and mangoes. In some locations, he said, particularly in regions hardest hit by the pandemic, demand for food relief has doubled or tripled. As of September, he said, they had already given away 15 million pounds.

At a SoSA watermelon distribution event in Garner, North Carolina, this summer, Mary Hood, a member of Solid Rock Ministries, said that her congregation’s relatively new food ministry had started out by providing food for about 200 people a month. Now, she said, they are seeing between 700 and 800 people seeking help every month. “God blesses us to be able to bless other people,” said Hood. “We can’t sit on an island and not reach out to people who have a need.” 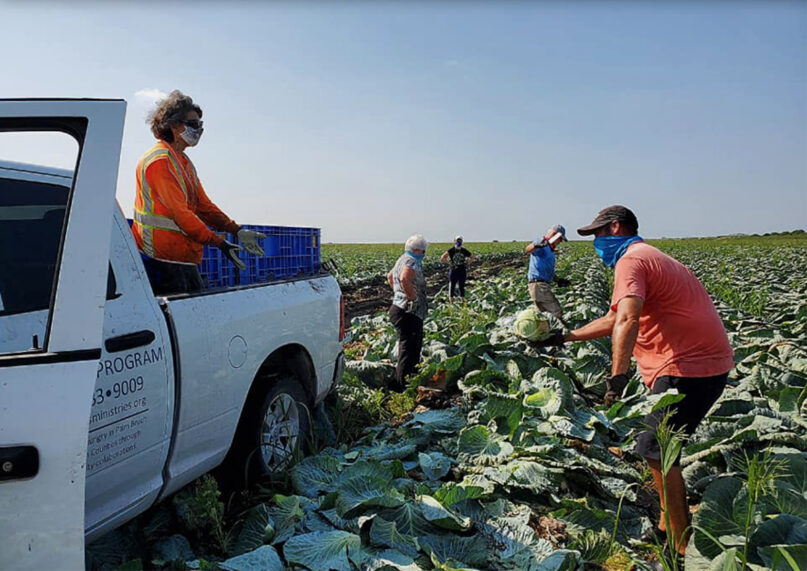 In some places, the food is gathered in the field, not unlike the gleaners in the Book of Ruth. Unlike the biblical Ruth, SoSA also works with factories and distributors, said SoSA’s Lemmon. At the same time, he said that farmers struggling to sell their produce and coping with supply chain disruptions were contacting nonprofit organizations like SoSA, seeking an outlet for their produce. SoSA also collaborates with the COVID-19-era USDA Farmers to Families food box program.

“God has a solution for everything,” he said. “He puts things together in the right place, and it’s just a matter of being open to opportunities in front of you.”

Smaller, newer gleaning organizations are also making a large impact. Bushels of Blessings, which operates out of the First Assembly of God Church in Carneys Point, New Jersey, began when Michele Montemurno, who had just been laid off from her job, read a passage from Leviticus during her morning devotional time. She thought: “I wonder if I could do that?”

Starting with “four of us, two cars and a bunch of cardboard boxes,” Bushel of Blessings started collecting about 30,000 pounds of produce. Now in their ninth season, with a team of 120 to 160 volunteer gleaners ages 11 to 92, they are half-a-ton shy of having given out two million pounds of produce. “I really believe the Lord gave me an outline of this almost ten years ago,” said Montemurno. 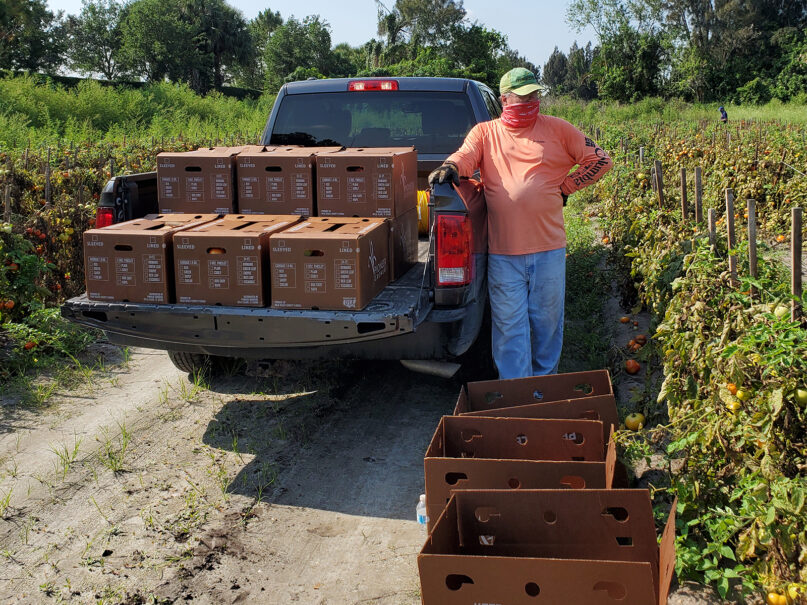 The pandemic has increased the need for gleaned food but also the difficulty of providing it. With COVID-19-related restrictions, the number of volunteers who go out to the farms is limited, said Michael Binger, regional director for the SoSA Carolinas district office, but they’ve adapted by making multiple visits to the same farm to glean produce.

CROS Ministries, an interfaith organization that frequently partners with SoSA in eastern Florida, had to cancel some events this year, and some pantries were closed for two months during the height of the pandemic. But the gleaning events they sponsored have attracted 2,400 volunteers, said Executive Director Ruth Mageria, and they were able to increase their normal haul of about 600,000 pounds of fresh produce by 5%.

“Hunger is an everyday reality,” she said, and the pandemic has simply “heightened awareness of an issue we face throughout the year.”

You don’t need faith to act on the food crisis, of course. Started 19 years ago by a group of friends in the San Francisco Bay area who didn’t want local fruit to go to waste, Village Harvest, a secular organization, has gleaned almost 3 million pounds of fruit since its founding. The organization, which has more than 6,000 registered volunteers, specializes in tree fruits like apricots and peaches, typically what is grown in area backyards. 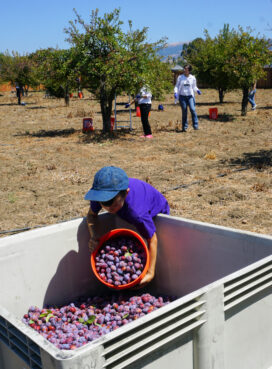 Volunteers with Village Harvest glean plums in 2017 in California. Photo by Aziz Baameur

“The motivation of people getting together to help (other) people is a very universal cause,” said Executive Director Craig Diserens. The spike in need — he estimated it has doubled from 1-in-10 to 2-in-10 in the wake of Silicon Valley pandemic layoffs — has prompted a “huge wave of volunteer activity,” he said.

But, he added, one of the joys of the work is bringing volunteers from different backgrounds together with a shared mission.

Aziz Baameur is one of those volunteers. Baameur, who was raised Sunni but now identifies simply as a Muslim, is a member of the interfaith Abrahamic Alliance, a coalition of 18 different organizations, including one mosque and one Jewish temple, as well as a Buddhist one.

“Charity and service to the poor is the foundation of all of our faiths. We do it in different ways, (but) it’s the same commandment to help people of our community,” Baameur said.