(RNS) — Amy Coney Barrett is a pro-life justice who has welcomed seven children biologically and by adoption. Her youngest child received a prenatal diagnosis of Down syndrome. Since many women with a similar prenatal diagnosis choose to terminate their pregnancies, it would be easy to conclude Barrett continued her pregnancy in order to live up to her ideology. But it is both overly simplistic and unfair to other parents of children with Down syndrome to conflate Barrett’s legal positions with her family choices.

Every woman who keeps an unexpected baby does more than make a choice about her own ability to care for and support that life. Whether in response to a prenatal diagnosis or not, every decision about a pregnancy is made within a web of cultural supports and pressures. This truth has only become more clear to me as I have raised my own child with Down syndrome alongside her two typically developing siblings.

My husband and I had been married for five years when I became pregnant. We declined an amniocentesis even after a prenatal screening test suggested our daughter might have Down syndrome. For us, this decision wasn’t a political one. It wasn’t an attempt to demonstrate our principles. We did feel some fear at the thought of raising a child with a disability, but we also believed in the value of every human life. We wanted to prepare our hearts for all the unexpected offerings every child brings into this world.

And for us, this decision wasn’t difficult. Our social position as an affluent, white, educated, married couple in the Northeast, with access to health care, early intervention services, inclusive school systems and a long list of other social supports all contribute to the relative ease with which our daughter Penny has grown up and flourished.

I have dozens of friends who are parents of children with Down syndrome who also received a prenatal diagnosis, and who gladly welcomed their child, and who are ardently pro-choice. And I have friends who considered themselves pro-life, but who struggled to make a decision when learning about the range of possibilities for children with Down syndrome.

I now have three children, and I understand better the demands of raising any child and the particular demands that can come with raising a child with disabilities. I recognize the agonizing decisions many women face when an unexpected pregnancy or an unexpected diagnosis threatens their economic security. I have been given an intimate and unexpected gift in knowing Penny and her particular way of being in the world, a way that is slower and gentler and more vulnerable than mine.

Amy Coney Barrett has articulated her “originalist” approach to the law, but she did not welcome her son, Benjamin, into her family out of a commitment to originalism. Her record, not her children, proves her conservative credentials. We stay mired in our polarized political corners if we view women’s choices primarily as political statements when they in fact reflect ethical decisions made in the context of social forces. When it comes to abortion, our votes matter, but so does the work we do to make our schools, places of worship and workplaces spaces that both welcome and support vulnerable women and children among us. 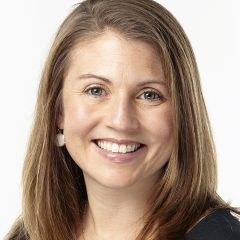 For me, having a child with Down syndrome has only made the lines between conservative and liberal, pro-life and pro-choice more blurry. Choice has become more tragic and more comprehensible. And life — in all its diverse forms — has become more beautiful.

(Amy Julia Becker is the author, most recently, of “White Picket Fences: Turning toward Love in a World Divided by Privilege.” The views expressed in this commentary do not necessarily reflect those of Religion News Service.)