People were marching in the streets, some rioting, and Collier said Houston told him it was time. Hillsong wanted to be part of changing the narrative and changing the world.

And, Houston said, he wanted Collier to be part of that work.

Since then, the global megachurch has announced Sam Collier and his wife, Toni Collier, as the church’s first African American lead pastors.

“Together, I think something special is going to happen by the grace of God,” Sam Collier told Religion News Service.

Pastors Brian and Bobbie Houston founded Hillsong Church in 1983 in the suburbs of Sydney, Australia. It now has locations in 28 countries around the world and, pre-pandemic, saw an average 150,000 attenders each week, according to its website. 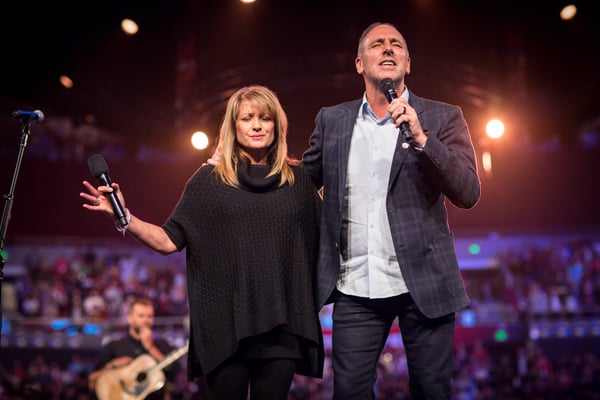 Hillsong is also known for its popular worship music and conferences.

In a video introducing the new church on Hillsong’s website, Sam Collier pointed out the Rev. Martin Luther King Jr.’s birthplace and the historic Ebenezer Baptist Church that King pastored, both in Atlanta.

“It’s interesting that we’re planting a church in the birthplace of civil rights,” he said.

Collier, founder of A Greater Story Ministries, grew up in Atlanta, where his dad was a pastor. He got his start in ministry at Ebenezer and New Birth Missionary Baptist Church, both predominantly Black churches in the city.

Then, for seven years, he was a pastor at North Point Community Church, led by Andy Stanley.

“Coming from the Black church over to North Point was a big culture shock, but it was awesome. It was really awesome,” said Collier, who counts pastors Stanley and Bernice King, daughter of the Rev. Martin Luther King Jr., as mentors and friends.

“I needed to see some different things and get exposed to another world, even get a new narrative about another community.” The announcement of the new Hillsong campus in Atlanta with lead pastors Sam and Toni Collier. Courtesy image

That’s what ultimately led him to Hillsong, he said.

Collier pointed to the Rev. Martin Luther King’s famous statement that 11 a.m. Sunday is the most segregated hour in America. At Hillsong Atlanta, he said, he hopes to “create a model for the country as it pertains to racial reconciliation, specifically in the birthplace of civil rights.”

“I think we need a church in Atlanta that unites Atlanta,” he said.

In discussions about working together with Hillsong, he asked Brian Houston if he’d be able to talk about race. He said Houston’s answer was, “I want you to.”

Collier had never heard anything like that in white evangelical spaces, he said.

Collier also wants to emphasize women’s voices in the church, he said.

Toni Collier said in the introduction video for Hillsong Atlanta that she hopes everybody will feel at home there.

Sam Collier said he hopes Hillsong Atlanta can hold its first services in March 2021, but the continuing COVID-19 pandemic presents its own challenges.

That part, he said, they’re still figuring out, much like churches across the United States.