(RNS) — On Wednesday, Sen. Mike Lee, a Latter-day Saint from Utah, outraged many when he compared President Donald Trump to a righteous military hero from the Book of Mormon.

“To my Mormon friends, my Latter-day Saint friends, think of him as Captain Moroni,” Lee told rallygoers in Arizona. He also stated that the president “seeks not the praise of the world” and wants only “the well-being and peace of the American people.”

Lee’s comments were problematic for anyone who has read the Book of Mormon’s account of the selfless character of Captain Moroni and endured four years of Trump’s self-obsessed tweets.

But Lee’s admiration of this president is still par for the course for Mormon men in the United States — roughly two-thirds of whom still approve of the president despite his mishandling of the coronavirus, his juvenile bullying and his chaotic approach to government.

Ryan Burge, an assistant professor of political science at Eastern Illinois University, wrote earlier this week for Religion in Public about Latter-day Saints and Trump, asking how the LDS vote would shift in 2020 compared with previous elections. He expects Trump to outperform his 2016 share of the LDS vote nationwide, which was only 55%, according to the Cooperative Congressional Election Study, because this time there is no Evan McMullin offering a third-party alternative that true conservatives can feel good about supporting.

“In 2016, nearly one-fifth of all LDS voters voted third-party,” Burge said in an RNS interview this week. In 2020, by contrast, the third-party options are far more low-key. So Burge expects Trump to improve upon his 2016 showing and get into the mid-60% range, and for Democratic nominee Joe Biden to outperform Hillary Clinton’s share by roughly 10 points as well, putting him in the mid-30s. 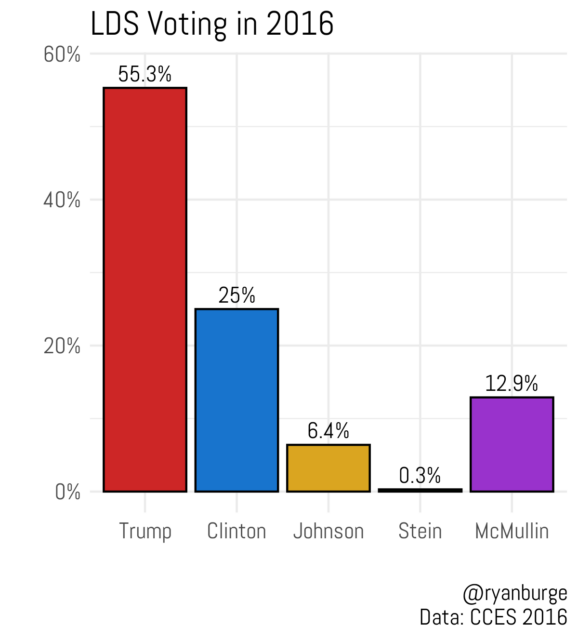 LDS voting in 2016, CCES data, courtesy of Ryan Burge. Note: This figure does not include all LDS respondents, only those who voted Republican, Democrat, Libertarian, Green, or for Evan McMullin. The percentage of Latter-day Saints who voted for Donald Trump decreases to 51% if the pool also includes those who did not remember their choice or who wrote in a name.

But that overall picture of the Mormon vote doesn’t tell the whole story, because age and gender play important roles.

Let’s start with women. Recent studies have shown a political gender divide between Mormon men and women — Pew found in 2019 that only 42% of Mormon women approved of Trump, compared with 63% of men, and a 2020 Utah Policy study also revealed a 16 percentage point gender gap.

Burge has analyzed nearly a year’s worth of data from July 2019 to June 2020 from Nationscape, which surveys more than 6,000 respondents a week for a total sample size of 306,357. Latter-day Saints are just 1.2% of that total, in keeping with their small numbers in the general population, but that’s still 3,763 people, enough that the data can be meaningfully divided by gender and age.

Men are fairly stable in their support of Trump, averaging out at 66% over the 12 months, while women’s numbers are generally lower, averaging 54%, and have fluctuated more widely. 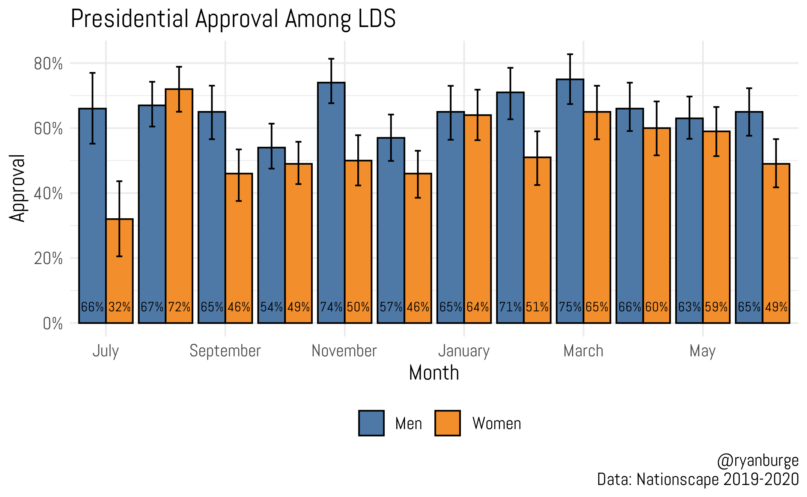 What’s particularly interesting about that is that LDS women appear to be ideologically a tiny bit more conservative than their male counterparts, with 49% of women describing themselves as “conservative” or “very conservative” compared with 47% of men. So their relative disapproval of the president shows that he is not fully connecting with some female voters who would normally be on board with a conservative president.

While Mormon women’s relative dislike of Trump is interesting when compared with their enthusiasm for previous GOP presidents and candidates, Burge said their disaffection is unlikely to make a real difference in the election.

“There may be a little bit of erosion among (LDS) women, but it’s not going to matter. In Arizona, it might matter,” he said, “but Arizona is already a plus for Biden right now. I don’t see it mattering in a national way.”

The more distant future may be another story. When the Nationscape sample is broken down by age, younger Mormons describe themselves as less conservative and less tied to the GOP than older ones. Among the 65+ age group, for example, 58% say they are conservative or very conservative, compared with just 37% of those ages 18 to 35. That’s a generational difference of more than 20 points.

There’s a similar story with party affiliation. While 61% of the oldest respondents identified as Republicans (not including leaners), only 42.5% of the youngest group did.

It’s not that the young adult Latter-day Saints are embracing a strong Democratic identity, though — only 13% did, almost identical to the 14% of the oldest generation. Rather, more are inhabiting the center spaces, identifying as leaners and independents.

Overall, Burge thinks that a majority of Mormons will vote for Trump this year, despite misgivings among some women and young people (and a minority of men, most visibly including Sen. Mitt Romney and former Sen. Jeff Flake).

“They are going to be a solidly red bloc, but not as much as white evangelicals,” Burge said. “That’s who they’re compared to a lot. The reality is that they are a sort of more principled version of white evangelicals, meaning that they didn’t all go for Trump in 2016. A big chunk of them cast protest votes.”

Many Mormon voters, he said, are “stuck. They don’t want to be Democrats, but they also can’t buy into all of Trump’s policies.”