(RNS) — Johnny Blakney took an exit off US 29 near the Charlotte Motor Speedway last month when a man stopped in traffic in the lane next to him pointed a gun at him.

Blakney, a 54-year-old resident of Concord, North Carolina, said this has happened to him before. He jotted the man’s license plate number and called it in to 911.

He also called his pastor and warned her to be careful.

“It’s so sad where we have to live in a society where you have to always keep your eyes open and look around and see what’s going on around you,” he said.

Blakney, a lifelong member of Bellefonte Presbyterian Church in the town of Harrisburg, a 25-minute drive northeast of Charlotte, is Black. The man pointing the gun at him, he said, was white.

That kind of racial intimidation is something Blakney, who works for a solid waste hauler, said he’s used to in Cabarrus County, a Republican stronghold of small cities and towns.

Best known as the home of the Charlotte Motor Speedway, the site of several major NASCAR races, the county’s residents, like many race-car fans, are predominantly white and conservative.

In an election year marked by political polarization, no issue may be as pervasive as race. For many African Americans living in rural areas dominated by conservative voters, racial intimidation is part of the warp and woof of life. 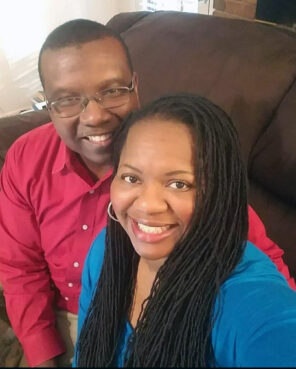 “When you’re talking about the Harrisburg area, it’s very Black and white,” said the Rev. Sonya McAuley-Allen, pastor of Bellefonte Presbyterian, a 152-year-old church Blakney has attended all his life. “We would speak in terms of Blackness and whiteness rather than Republican and Democrat. The political conversation is fueled by a race conversation that’s going to preempt it.”

About 19% of Cabarrus County residents are Black, according to the U.S. Census. That percentage is growing as many people leave Charlotte’s higher cost of living for its surrounding suburbs and small towns. But for many Black residents who once farmed in this region and now work in a variety of sectors, life can be isolating and lonely in a dominant white culture, even if it never brings the kind of intimidation Blakney has experienced.

From 1980 through 2004, the Republican presidential nominee won Cabarrus County every time, by an average of 29 points. That margin began to drop in 2008, and in 2016 President Trump won the county by 19 points over Hillary Clinton.

There are no Black residents on the Cabarrus County Board of Commissioners. A few months ago, when Blackney spotted a yard sign for a Republican state representative planted on the lawn of Bellefonte Presbyterian, he informed his pastor, uprooted it and deposited it across the street.

“We’re not going to publicize anyone’s campaign on the church site, but we’re definitely not in support of a Republican on our church land,” said McAuley-Allen.

McAuley-Allen doesn’t assume everyone in the church is a Democrat. There are surely some Republicans. But the majority — like the majority of Black Americans nationwide — are reliably Democrats.

For members of Bellefonte Presbyterian, this summer’s racial unrest following the killings of George Floyd and Breonna Taylor at the hands of white police officers was deeply scarring.

One town over in Kannapolis, a mostly white Baptist church hosted a “Blue Lives Matter” event in August. Nearly 100 guests showed up, and a group of “Watchmen” made sure there was no trouble, the local TV station reported.

Members of Bellefonte Presbyterian, who have not gathered in person for months due to the coronavirus pandemic, discussed the Black Lives Matter protests online and in one-on-one phone conversations with their pastor.

“Everything that happened to Breonna happened to us as well,” said McAuley-Allen, who has led the 100-member church for the past three years. 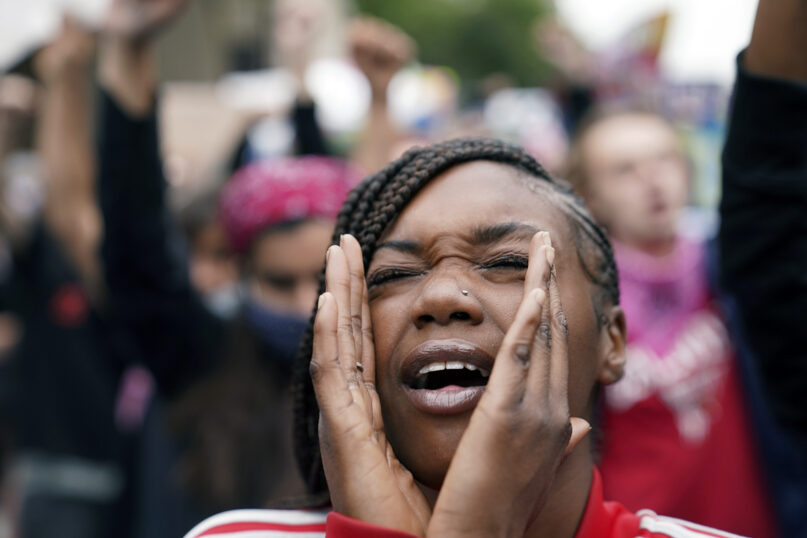 A woman speaks during a protest on Sept. 23, 2020, in Louisville, Kentucky. A grand jury indicted one officer on criminal charges six months after Breonna Taylor was fatally shot by police in Kentucky. The lack of more charges led to many demonstrations across the nation. (AP Photo/John Minchillo)

Change, however, may be coming to this region of the state. In the 8th Congressional District of North Carolina, which includes Cabarrus County, the incumbent Republican Congressman, Richard Hudson, is facing his first major challenger. Democrat Patricia Timmons-Goodson, a former North Carolina Supreme Court justice and a Black woman, is leading Hudson by 3 points, according to the latest polls.

Pastors like Vincent Long of Bethel AME Zion Church, in the small town of Spring Lake, North Carolina, also in the 8th Congressional District, are doing all they can to turn the tide.

Bethel AME Zion wants to see 100% of its members voting. It has distributed voting guides and sample ballots, educated its members and followed up with each one about their registration and voting status.

“We’re convinced that for things to go the way we would like it to go, it will take a massive turnout,” said Long. We’ve been heartened by the numbers we’ve seen so far in early voting.”

Unlike towns such as Harrisburg, Spring Lake, about six miles north of Fort Bragg, has successfully voted for several African American elected officials, including Democratic State Rep. Marvin Lucas, who is a member of Bethel AME Zion.

But concerns about race dominate here, too.

Long said members of his church were dismayed when President Trump tried to appeal to suburban white women by rolling back an Obama-era program intended to combat racial segregation in suburban housing.

“To us, it means we don’t want you minorities in the suburbs,” he said. Of course, race isn’t the only issue motivating predominantly Black churches. Franklin Watkins, pastor of Oak Grove Missionary Baptist Church in Harrisburg, said keeping healthcare affordable may be the No. 1 issue on the minds of his middle-aged congregants.

The coronavirus has killed more than 227,000 Americans, but African Americans are twice as likely to die of it, according to the Centers for Disease Control. Yet when Watkins looks around, he sees many white evangelical churches opening back up in-person worship services.

Oak Grove, like many other predominantly Black churches, remains closed, with online services only.

When it comes to healthcare, some Black and white congregations seem miles apart — even when they live in the same town.

“When we open it’ll be a partial opening, and we’ll make sure people are healthy and have an urge to be at the church and their spiritual needs aren’t being met online,” said Watkins.

To Watkins, as to Blakney, the Bellefonte Presbyterian Church member, the stark imbalance of living parallel lives in the same vicinity can be vexing.

“My thing is that everybody should be treated equally,” Blakney said. It shouldn’t just be about “rights for white people or Hispanic people — everybody has the same rights.”