(RNS) — An ad running in The Washington Post and other outlets Friday (Oct. 30) thanked a number of prominent evangelical Christian leaders and organizations for “standing up in this dark time.”

But at least one of the evangelicals named in the ad and on the website Christians Against Trumpism & Political Extremism doesn’t appear to appreciate the gesture.

“Thousands of Christian leaders and institutions have stood firm on the foundational truths of our faith, against the disheartening embrace of Trumpism,” both the ad and the website read.

“When the history books are written about this era, the principled, committed and courageous leaders who refused to compromise will be remembered, and we are deeply grateful for your stand.” 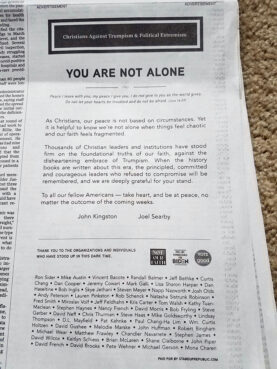 The newspaper ad is signed by Christians Against Trumpism & Political Extremism founders John Kingston, a lawyer and political operative who ran as a Republican candidate in 2018 for the U.S. Senate seat held by Elizabeth Warren, and Joel Searby, a political consultant who managed Evan McMullin’s 2016 presidential campaign.

Both the ad and website then thank “the organizations and individuals who have stood up in this dark time.”

They list organizations Not Our Faith, Pro-Life Evangelicals for Biden and Vote Common Good.

They also list a number of prominent evangelicals, including Mark Galli, the former editor of Christianity Today responsible for the flagship evangelical magazine’s editorial arguing President Donald Trump should be removed from office; Lisa Sharon Harper, who organized the recent Ally Tour; Napp Nazworth, the former politics editor of the Christian Post, who resigned over a pro-Trump editorial on the website; and popular pastor John Piper, who recently penned a blog post that never named Trump but expressed the importance of a leader’s personality as well as his or her policies.

The list caused some confusion over whether those organizations and individuals had signed on to a statement on Christians Against Trumpism & Political Extremism’s website, which decries “the ways in which the actions of our political leaders embolden speech and behavior antithetical to the gospel – among Christian supporters and the citizenry at-large.”

“My name is being used without my permission. I do not endorse any of the organizations listed here.”

RELATED: Unlike most Christian women’s conferences, the Ally Virtual Tour isn’t shying away from politics

The confusion seemed to come, in part, because the website included a form where readers can sign in support of the statement, adding their own name to the list featured underneath those prominent figures.

Christians Against Trumpism & Political Extremism, which identifies itself as a campaign of Stand Up Republic, responded to Piper from its Twitter account.

“We only wished to graciously thank any & all who have spoken truth,” it tweeted.

“Our statement says, ‘Thank you to the organizations and individuals who have stood up in this dark time.’ You are one of those voices – and we are grateful – and of course accept your clarification.”

News
Interfaith vigil in DC gathers for second year, part of citywide Jan. 6 observances
Follow us on Facebook!
Submit your photos to RNS