KITCHENER, Ontario (RNS) — All day, the sweetwater had dripped steadily from the trunks of the maple trees into blue, plastic buckets.

By midafternoon, a cold wind had started to threaten the small fire where the sap was boiling over two propane burners. A brief blast of snow pelted the small group that came and went from the sugarbush in Kitchener, Ontario. Occasionally, someone would plunge a pocketknife into the bubbling syrup to test how thick and sticky it had gotten.

“Why was I out here all day freezing?” joked Dave Skene, who is a citizen of the Métis Nation and co-executive director of the White Owl Native Ancestry Association, which offers counseling and land-based teachings and programming for Indigenous people in the area.

RELATED: Indigenous Peoples Day comes amid a reckoning over colonialism and calls for return of Native land

Skene’s shivering efforts were rewarded by the jars of maple syrup he took home at the end of the day, made this March by White Owl staff for the first time on their own land

The 10.5-acre plot was returned to the group in 2017 with help from a church in nearby Waterloo, Ontario.

It’s one of a handful of examples of churches participating in the growing #LandBack movement, which calls on both Canada and the United States to return land to the First Nations and Native American peoples who first lived there. Every year, the Thanksgiving holiday turns a spotlight on the complex and brutal history European Americans have with both the land and the Indigenous people who inhabited it first. The candy-coated myths of the first Thanksgiving, portrayed by costumed children across the country, have increasingly come under scrutiny.

Amid such historical truth-telling, some mainline Protestants have repudiated the Doctrine of Discovery, which had been used as a justification for European Christians to seize lands inhabited by Indigenous peoples.

“Churches just get to be first in line to show the political system the will and the means for doing it,” said George “Tink” Tinker, an Osage scholar and author of “American Indian Liberation: A Theology of Sovereignty.”

After all, Tinker added, “Name one congregation in the United States that is not located on Indian land.” 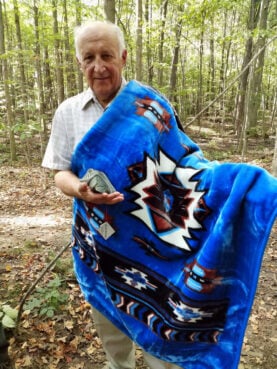 In the 1960s, that 10.5-acre property in southern Kitchener was purchased by an extension council associated with the United Church of Canada, according to Arthur Hills, a member of the council. But its plans for a church on the site were thwarted by, of all things, the presence of an endangered salamander that prevented any building on the land.

And so it sat forgotten for years.

That is, until the youth group at a nearby United Church of Canada congregation, Emmanuel United Church in Waterloo, donated about $2,000 Canadian to White Owl and leaders of both the church and the group got to talking, said Hills, who also attends Emmanuel.

White Owl co-executive director Michelle Sutherland, who is Mi’kmaq and Welsh, mentioned that what the group really needed was land.

About a year later, with Emmanuel bridging the gap, representatives from the extension council and United Church of Canada turned over the land to White Owl in a ceremony on the property, followed by a service at Emmanuel.

Emmanuel has also invited Indigenous people to speak and share songs and ceremonies during its services, which begin each week with an acknowledgment of the Attiwonderon, Anishinaabe and Haudenosaunee peoples.

But, said the Rev. Jenn Hind-Urquhart of Emmanuel, the church wanted to go beyond just acknowledging the original inhabitants of the land.

“How do we take that one step further and actually work to reconcile relationships and listen to the painful stories, listen to our painful history and ask Indigenous people how they would like to be walked with because our history is so much one of domination and colonization?” 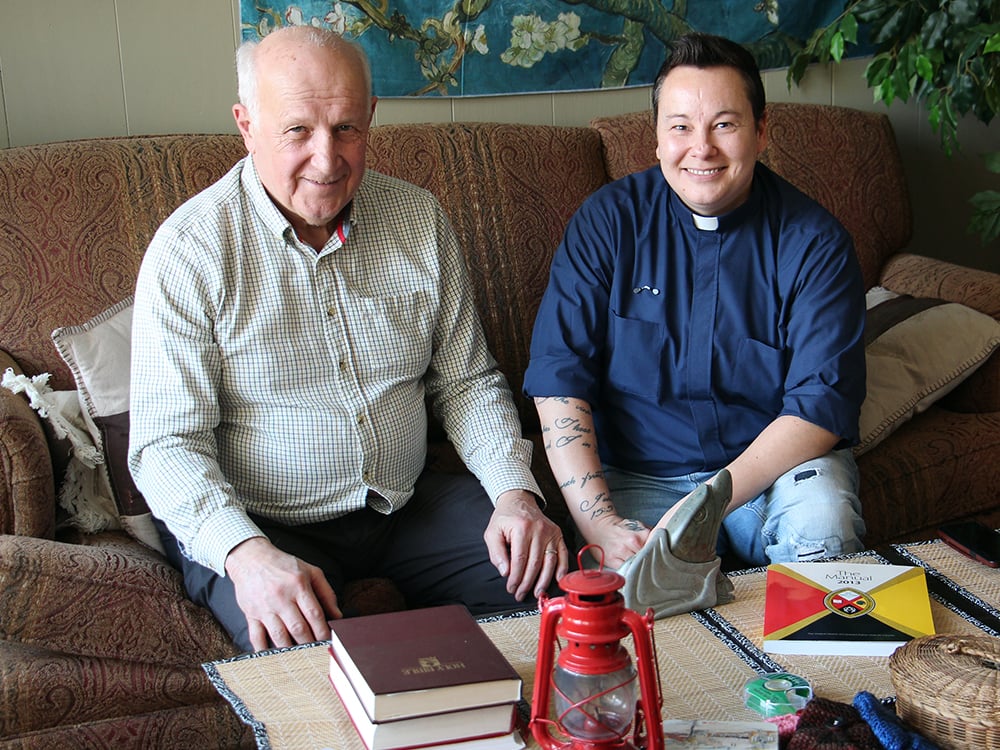 That’s a question a number of denominations are asking after recognizing their participation in colonizing Indigenous lands.

The United Church of Canada has formally apologized to First Nations people and acknowledged its past role in Canada’s residential schools that separated generations of Indigenous children from their families and cultures. Other denominations have passed resolutions repenting for the Doctrine of Discovery.

After the Evangelical Lutheran Church in America approved its denunciation in 2016, Tinker, the Clifford Baldridge Emeritus Professor of American Indian Cultures and Religious Traditions at Iliff School of Theology in Denver, told the denomination’s Rocky Mountain Synod, “Don’t let it stop there.”

“There’s a lot of work to be done in order to make right what was made so wrong over so many centuries,” he said. Returning land is one way he suggested churches could do that work.

The scholar and author was the director of the Four Winds American Indian Council in 2015 when the Rocky Mountain Synod transferred the deed for two city lots in Denver to the council. The land included a former church building Four Winds had used for decades as a hub for Denver’s Native American community, marrying and burying people, celebrating sobriety anniversaries and planning political action.

When the opportunity came to sell the land, the synod chose instead to “let go of their property claim and to fulfill our relationship to the land in that place,” Tinker told Religion News Service.

That cost the synod money, he said.

And it was often “messy” as council leadership and a synod task force met for meals and conversation, added Deacon Erin Power, assistant to the bishop for synodical life in the Rocky Mountain Synod. The synod had a lot to unlearn when it came to a “white, Western, European way of doing things,” Power said. The council had to form a nonprofit organization and wrestle with ideas of property ownership.

It was the first time Tinker had heard of a church body returning land to Native Americans, he said.

He had spent several years talking to the United Methodist Church about what “this business of repentance might look like.” After 500 years of colonialism, that can’t simply be asking forgiveness or offering money, he said. It has to be about land.

Since then, he said, he’s heard of two more instances within the United Methodist Church: In 2018, the denomination’s Oregon-Idaho Conference returned a camp outside of Joseph, Oregon, to the Nez Perce, and last year, its General Board of Global Ministries returned 3 acres in Upper Sandusky, Ohio, to the Wyandotte Nation. Hundreds of people assemble to march through Upper Sandusky, Ohio, for a ceremony to transfer a deed to the Wyandotte Nation from the United Methodist Church, in September 2019. Photo courtesy of Curran PR

Other denominations have returned land to Indigenous nations in recent years, too.

Just last year, the Hudson River Presbytery of the Presbyterian Church (USA) transferred the title of the former Stony Point Church and its property in White Plains, New York, to the Sweetwater Cultural Center. And, across the border, the United Church of Canada began transferring some of its land in Ontario to the Lenape people of the Delaware Nation at Moraviantown last year.

In Ohio, United Methodists’ Global Ministries reached out to the Wyandotte Nation when it realized it had been holding John Stewart United Methodist Church and a small cemetery in trust for the people since 1843.

Chief Billy Friend of the Wyandotte Nation — now headquartered in Oklahoma after it was forced from its land by the Indian Removal Act — said he was grateful when the agency offered to return the land.

“In Indian Country, there was a lot taken from us over the years. There are very few times somebody comes back and says, ‘We want to give back to you,’” Friend said.

The day the church transferred the deed to the Wyandotte Nation, hundreds of Wyandotte people marched through Upper Sandusky, some proudly wearing ribbon shirts and skirts and regalia. 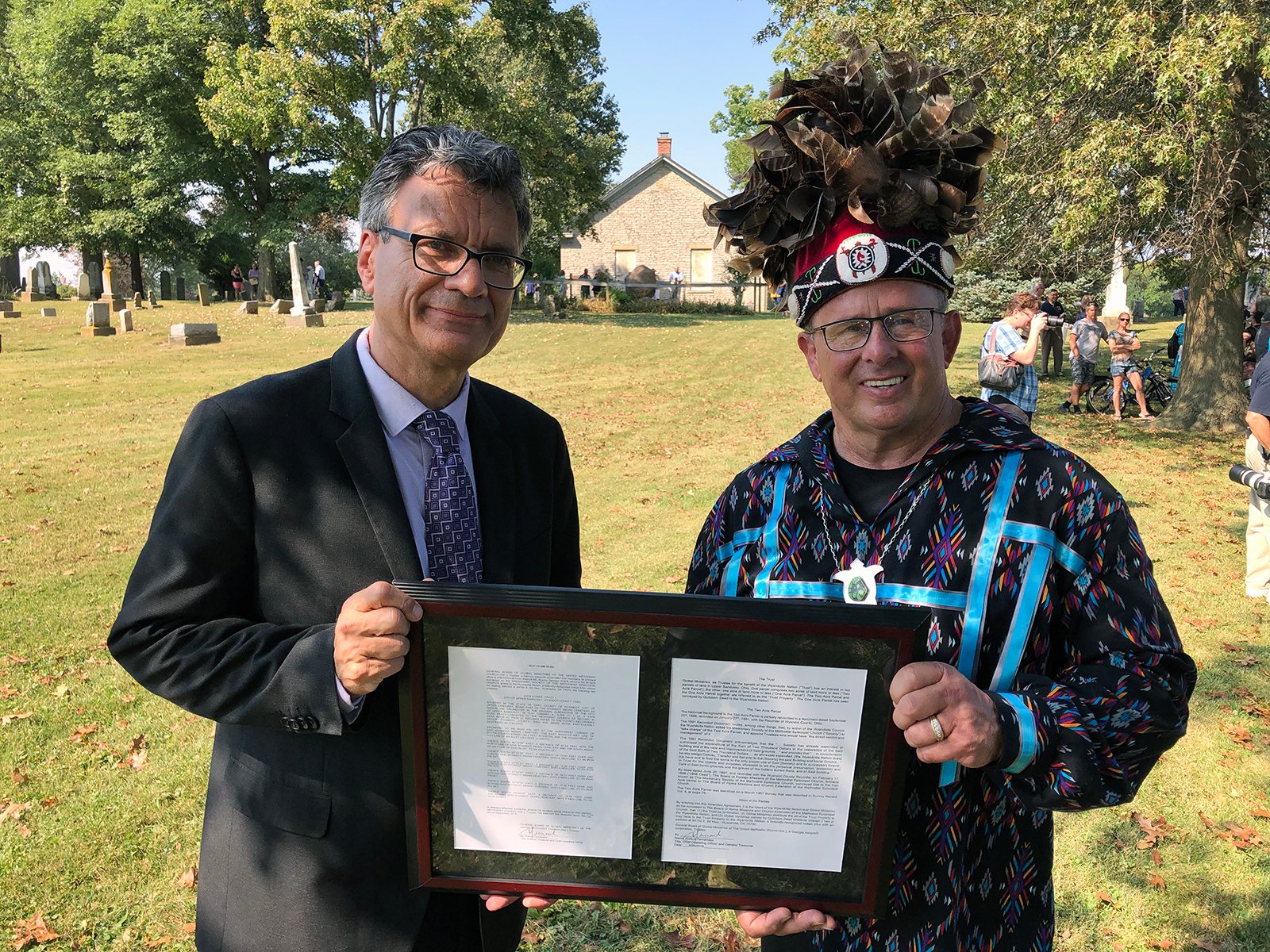 Thomas Kemper, left, and Chief Billy Friend of the Wyandotte Nation Upper, hold the deed to a transfered property in Sandusky, Ohio, in September 2019. Photo courtesy of Curran PR

“The last time that that many Wyandottes were there, we were leaving,” Friend said.

In the summer, he said, the nation brings groups of high school and college students, and sometimes elders, to stand in the places their ancestors stood and read their names on the headstones in the cemetery.

It’s a “journey of understanding” that connects the Wyandotte to the past and to the land, he said.

In March, White Owl ended sugar season with 110 liter jars of maple syrup from its land in Ontario, according to Skene.

One weekend, Skene said 30 to 40 people came out to the land each day before the COVID-19 pandemic prevented large groups from gathering. The association has held ceremonies on the land and is looking into cultivating a forest garden there, too.

Sugar season traditionally was a communal event, the first time Métis and Anishinaabe people would gather again after the long winter, he explained.

On White Owl’s land, it still is.