LOS ANGELES (RNS) — Christian musician Sean Feucht has plans to bring his outdoor “worship protest” tour to downtown Los Angeles on New Year’s Eve at a site near the local homeless community of Skid Row, according to his website.

Feucht’s tour, which he refers to as the #letusworship movement, has received criticism from health officials and faith leaders for drawing thousands of spectators and worshippers, many of whom have ignored social distancing guidelines and health orders requiring masks.

The events, which Feucht has held in Seattle, Nashville, Washington, D.C., and other cities around the U.S., are promoted as a response to the perceived targeting of churches by COVID-19-related government ordinances.

Feucht did not respond to a request for comment, but city officials told Religion News Service on Wednesday (Nov. 25) that no permits had been issued to hold the event. Feucht has ties to Bethel Community Church, a prominent California charismatic Christian congregation.

On Feucht’s website, the event is scheduled from 9 p.m. to midnight at Azusa Street, the site of a historical revival meeting in the early 1900’s recognized as the origin of modern Pentecostalism.

That location is less than half a mile away from the community of Skid Row, where an estimated 3,000 people sleep on the street since the pandemic struck, said Joey Aguilar, a program manager for Housing for Health, a division of Los Angeles County’s Department of Health Services.

Feucht’s announcement of the New Year’s Eve worship protest comes as Los Angeles County is experiencing a surge in COVID-19 cases and deaths, spurring officials to craft a new “Safer at Home” order to help slow the spread of the virus. 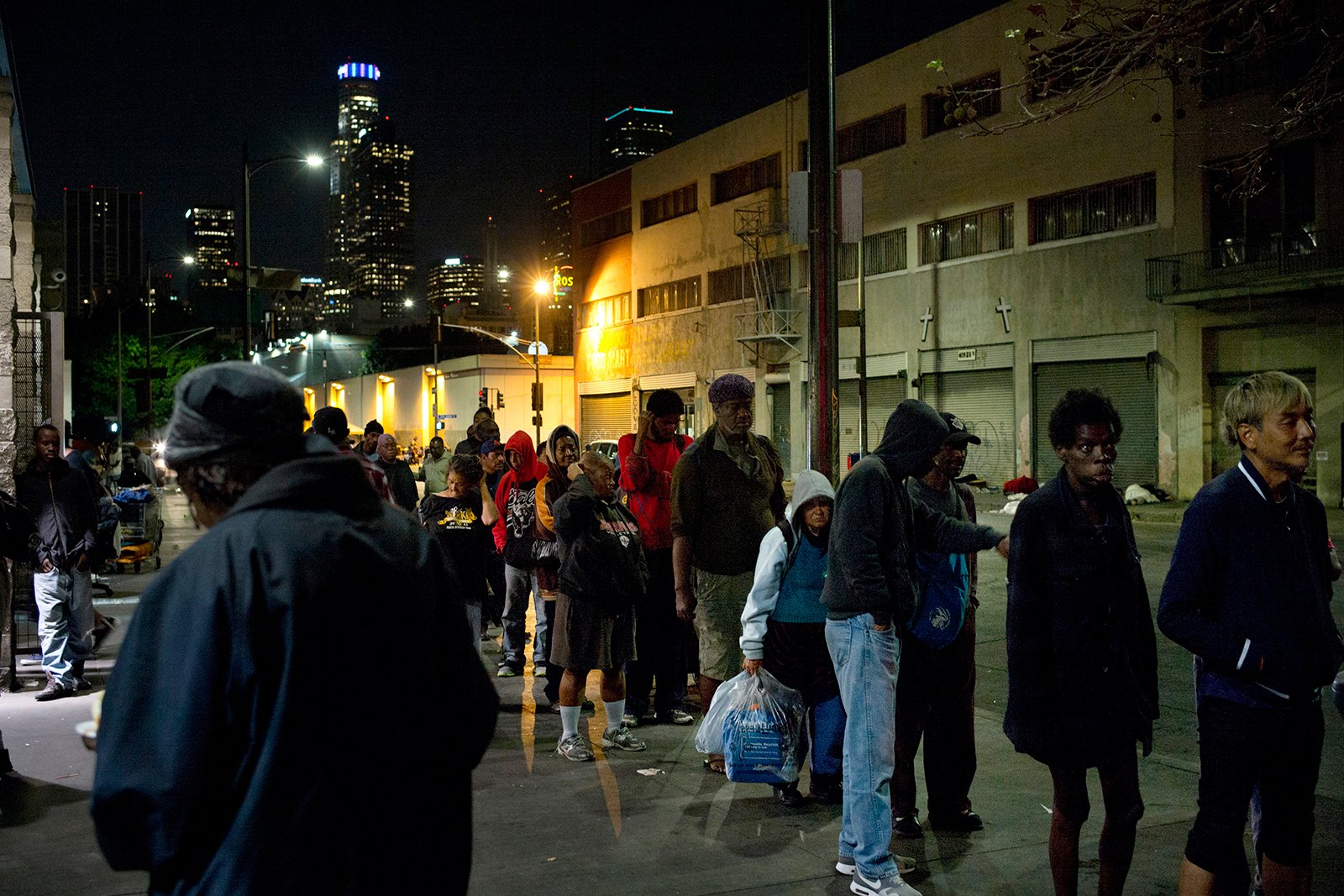 In this Sept. 19, 2017 file photo, people line up for free food being given out in an area of downtown Los Angeles known as Skid Row. (AP Photo/Jae C. Hong)

The event is concerning to organizers and others working with the vulnerable Skid Row homeless population.

To pastor Stephe “Cue” Jn-Marie, who founded The Row, or “The Church Without Walls” in Skid Row, there’s a “miseducation of the church” among those who believe they are being persecuted by health orders in place to limit the spread of COVID-19, which has so far killed more than 260,000 people in the United States.

When people protest wearing masks that could potentially save lives, “we know that’s not God,” Jn-Marie said.

“We know if there’s a virus that has killed so many people, the response of believers is to really focus on the people that are dying,” he said.

The Row has hosted Friday worship services in Skid Row for more than 10 years. That changed with COVID-19. While The Row continued to feed residents, it stopped congregating for Friday worship. It has since resumed services, with social distancing and mask-wearing guidelines in place.

“We felt God called us to be the delivery service to the poor, the Door Dashers to the poor,” Jn-Marie said, referring to the popular food delivery app. “We continue to serve folks.”

They’ve done so by helping create hand-washing stations, providing hygiene products and doubling down on promoting mask-wearing. As a result, many in the community do wear masks, but just as Skid Row is a “microcosm of our entire society,” there are going to be people who push back, Jn-Marie said.

Jn-Marie recalled how early on in the pandemic a group of Christians, who were unmasked, stopped by Skid Row, preaching to residents that they needed to trust God instead of wearing masks.

“We spend a lot of time working to get people to wear masks and here you go coming with this nonsense,” he said. “You’re putting people at risk with your doctrine.”

Authorities in some cities have attempted to stop Feucht’s performances. In Seattle in September, his concert was moved from a park into nearby streets after organizers were denied access to a public park.

“There are a lot of people in Skid Row that are especially vulnerable to COVID,” Aguilar said. “It’s someone’s home and you’re really there as a guest.”