VATICAN CITY (RNS) — With the appointment of 13 new cardinals this weekend, Pope Francis has now appointed the majority of cardinals. He also holds the record for the number of cardinals to whom he has given the boot.

At his seventh consistory, held Saturday (Nov. 28) in St. Peter’s Basilica, the pope gave 11 of the new cardinals the traditional red hat and ring along with the deaconship to a Roman church. (The other two, Archbishops Jose Fuerte Advincula of the Philippines and Cornelius Sim of Brunei, did not attend due to COVID-19 restrictions.)

In his homily Francis cautioned the newly minted prelates to “always be careful to remain on the road.” He mentioned the “many kinds of corruption in the priestly life” that can lead them astray.

“The scarlet of a cardinal’s robes, which is the color of blood, can, for a worldly spirit, become the color of a secular ‘eminence,’” Francis said. “In that case, you will no longer be a shepherd who is close to his people.”

He added: “Once you feel that way, you are already off the road.”

Francis’ words, which were quoted from the day’s Gospel reading, referred equally to the current scandals rocking the Catholic Church and stood as a warning for the new cardinals to avoid the mistakes of their predecessors.

Becoming a cardinal was once a cushy reward in which these princes of the church enjoy the privilege and power of having climbed to the top of the ecclesiastical ladder. They elect popes, and their influence can rock the Vatican’s delicate power balances.

Yet since Francis was elected in 2013, the position of a cardinal has never been more uncertain. In 2015, he accepted the resignation of the Scottish Cardinal Keith Michael Patrick O’Brien following an investigation of sexual misconduct with seminarians.

In 2018, Francis accepted the resignation of Theodore McCarrick, who also had to give up his cardinal status following reports that he had sexually abused seminarians and at least one underage boy. McCarrick was also defrocked.

In September, Francis asked Cardinal Angelo Becciu to relinquish the privileges of his red hat, though not the title, following reports of financial mismanagement and corruption. If those cardinals serve as an example to those he has elevated, Saturday’s new crop has been selected to take the church in a new direction. The newest American cardinal, Archbishop Wilton Gregory of Washington, D.C., for instance, is the first African American cardinal in history and an advocate for civil rights. His appointment reflects Francis’ own vested interest in the racial inequalities in the United States and globally.

RELATED: In new book, Pope Francis addresses COVID-19 and politics, with an eye to the US

Besides his stern homily, Francis made clear that he expects his new cardinals to be exemplary. As the pope placed the red “beretta” on the head of Cardinal Marcello Semeraro, recently nominated to head the Vatican Congregation for the Causes of Saints, a position once held by Becciu, Francis quipped: “Behave well!”

Another new cardinal, Silvano Maria Tomasi, the church’s permanent observer to the United Nations in Geneva, will become special envoy to the Sovereign Military Order of Malta, another role previously held by Becciu.

Tomasi is too old to vote at the next conclave, as are new cardinals Raniero Cantalamessa, preacher to the papal household; Enrico Feroci, a parish priest in Rome; and Felipe Arizmendi Esquivel, bishop emeritus of a Mexico diocese and indigenous rights activist.

The pope also gave a red hat to Archbishop Augusto Paolo Lojudice of Siena, who has worked on migration for the Italian episcopal conference, and Father Mauro Gambetti, a Franciscan friar who oversees the Sacred Convent of Assisi. Mario Grech, recently made secretary general of the Synod of Bishops, also became the third Maltese cardinal in history on Saturday.

These cardinals embody the priorities of this pontificate, whether pastoral sensitivity, a spirit of “synodality” or an issue Francis cares about deeply. 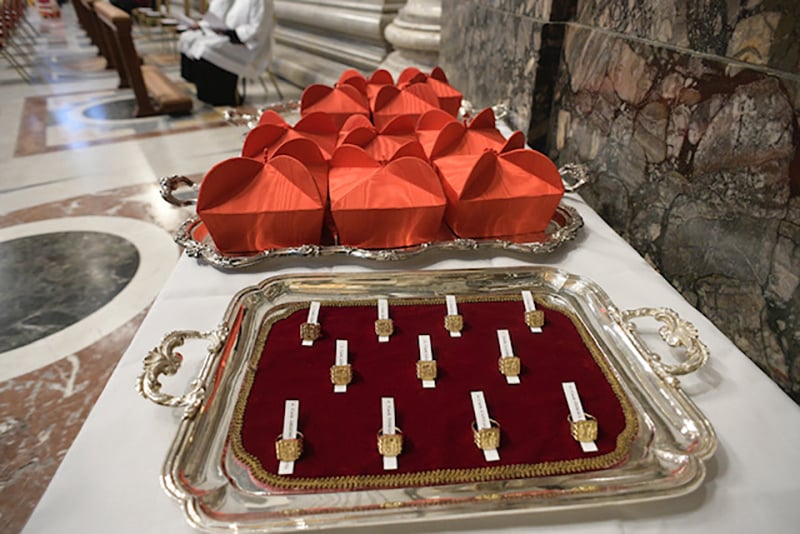 Birettas and rings sit before a consistory on Nov. 28, 2020, at the Vatican. Photo courtesy of Vatican Media

While the majority of voting cardinals still represent Europe, 53, and Italy boasts the most, Francis has done much to globalize the church hierarchy.

Francis has now handpicked 73 of the 128 cardinals eligible to vote in the conclave that will replace him on his death. Benedict XVI, by comparison, appointed 39 cardinals to the electoral college; St. John Paul II elected 16. The total number of cardinals, including those who cannot vote due to old age or other circumstances, is now 229.

The shadow of COVID-19 made the consistory unlike any other. Those cardinals who could attend sat socially distanced in the Basilica wearing protective masks, along with roughly 100 attendees.

The traditional embrace shared by the new cardinals with the old ones had to be eliminated, though Francis hugged the new prelates without a mask. Only Gregory kept his mask on for the ceremony and the meeting later with the Emeritus Pope Benedict XVI, during the cardinals’ visit to the Monastery of Mater Ecclesiae at the Vatican where Benedict lives.

Neither pope wore a mask during the meeting, which was marked “by a climate of affection” and “joy,” according to a statement by Vatican spokesman Matteo Bruni.

On Sunday, Francis and the cardinals joined again to celebrate the Mass at St. Peter’s for the first Sunday of Advent, the liturgical period leading up to Christmas. The Gospel reading of the day quoted God asking his followers to “be watchful,” an admonition that Francis repeated to the new princes of the church.

The pope warned against “the slumber of mediocrity” and “the slumber of indifference” that lead individuals to become “lukewarm,” “worldly” and unconcerned with the suffering of others, making their “hearts grow dark.

“Being watchful in expectation of his coming means not letting ourselves be overcome by discouragement,” Francis said. “It is to live in hope.”