(RNS) — The Rev. Greg Drumwright won a court victory Wednesday (Dec. 2) when a judge dismissed a motion to ban him from Alamance County, North Carolina, where he has been leading marches to protest racialized policing.

The dismissal was just the latest move in an ongoing battle between Drumwright, a pastor from nearby Greensboro, and a conservative mostly rural county, known for its provocative law enforcement policies and Confederate monument.

On Tuesday, local prosecutor Kevin Patrick Harrison filed a motion to ban Drumwright from Alamance County property, alleging he is “a danger to the community” and likely to riot and endanger lives and property.

At a hearing in the county’s criminal courthouse, District Court Judge Frederick B. Wilkins Jr. dismissed the motion.

READ: Charged with 2 felonies for protesting, the Rev. Greg Drumwright is marching on

Tensions between Drumwright and county officials came to a head on Oct. 31, when police and sheriff deputies broke up a march to the polls by pepper-spraying protesters — including children and the elderly — and arresting nearly two dozen people.

The Alamance County Sheriff’s Office then charged Drumwright with two felonies: assault on an officer and obstructing justice. Video of the event shows a brief tussle when law enforcement attempted to grab the protesters’ generator (used to power the PA system) and Drumwright stepped in to intervene.

The prosecutor’s attempt to ban Drumwright from the county was part of a motion to modify the conditions of the pastor’s pretrial release or bond. 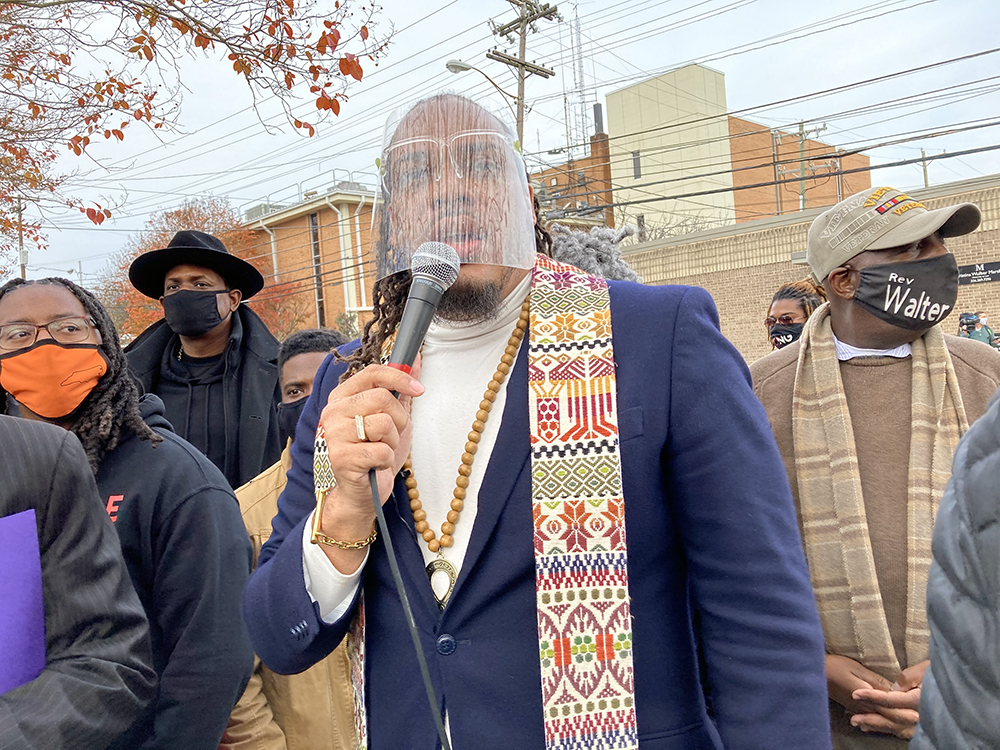 The Rev. Greg Drumwright speaks during a march for criminal justice reform in Graham, North Carolina, on Nov. 29, 2020. RNS photo by Yonat Shimron

Drumwright’s lawyers contend the felony charges are a form of retaliation against the 40-year-old civil rights activist who has spoken out against racialized policing and white supremacy.

Drumwright, a pastor of Greensboro’s Citadel of Praise and the leader of a group called Justice 4 the Next Generation, has been marching through the city of Graham, located in Alamance County, since June.

His latest march, on Sunday, was a peaceful 1.5-mile walk attended by some 200 people. The last stop on the march was at the square where a statue of a Confederate soldier holding a rifle is now surrounded by a metal fence and guarded by a sheriff’s patrol car 24 hours a day.

Protesters demanded the statue be torn down. They also called for the resignation of Sheriff Terry Johnson, who is known for some of the country’s worst racial profiling and the subject of a U.S. Department of Justice investigation.

Earlier this summer in response to nationwide unrest following the killing of George Floyd while in police custody, the city of Graham passed an ordinance prohibiting more than two people from protesting without a permit. Drumwright and several others sued and the the ordinance was lifted as part of a temporary restraining order.

On Wednesday, Drumwright said the purpose of marching has “not been to riot, to destroy or to damage any property or to harm any people.”

Drumwright was born in Alamance County on the border of Burlington and Graham. He holds a Master of Divinity degree from Wake Forest University and has been teaching at High Point University in addition to pastoring his church.

Drumwright’s lawyer Jason Keith argued that the motion to ban him from county property violated his constitutional rights. Several other lawyers attended the hearing, including Ben Crump, who has represented the families of Ahmaud Arbery, Breonna Taylor and George Floyd, who were killed by police or residents of their communities.

“I believe this was done to silence the movement and the grassroots advocacy that’s been happening around police misconduct and racism in Alamance County,” said Mark Dorosin, a lawyer representing Drumwright and others in a separate federal civil rights suit.