(RNS) — In the fall of 2006, a public stir was created by the documentary “Jesus Camp,” about a charismatic summer camp in North Dakota that taught children to use “their prophetic gifts” to “take back America for Christ.”

In the film’s most striking scene, Camp Director Becky Fischer set up a cardboard cutout of then-President George W. Bush and had the children welcome, bless, and (in tongues) “do some warfare over” him. 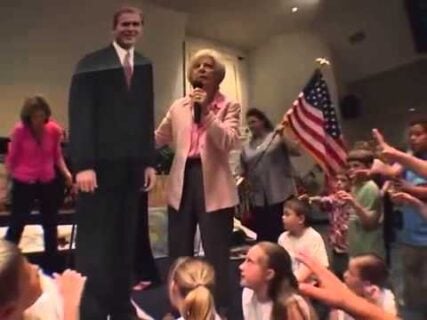 A still of Becky Fischer, center, from the documentary “Jesus Camp.” Video screengrab

These days, it’s President Trump who looks like the object of evangelical worship. After Election Day, Paula White prayed in tongues for angels from Africa and South America to bring him victory. Eric Metaxas said he’d lay down his life in the battle.

“By now I hope you can see that this is far beyond a battle of politics,” tweeted the Christian author Lance Wallnau. “We are up against a malevolent and demonic agenda aimed to destroy the global force for kingdom expansion that is America.”

If you want to keep up with this crowd, check out Messiah College Professor John Fea’s blog, The Way of Improvement Leads Home. Fea calls them “court evangelicals,” but at this point they’re more like Trump’s apostles.

Anyway, so much for the transactional theory of white evangelicals’ support of Trump. To wit: While they disapprove of his “lifestyle” and manner, and give him low marks for personal piety, they are more than happy to render their support in return for his meeting their policy agenda on judges, religious liberty, Israel and, let us say, the cultural status quo ante.

But if that was the art of their deal, by now they’d be moving on, girding their loins for the next Democratic presidency. Instead, they’re doubling and tripling down on Trump staying in office by whatever means necessary.

OK, not all of them. Robert Jeffress has allowed as how, albeit “a bitter pill to swallow,” Joe Biden is president-elect.

But have the others decided that Trump’s lifestyle is just fine, that the Bible-hefter of St. John’s Episcopal Church is pious after all, that the man who just informed RNS that he is a “non-denominational Christian” has actually become one of them?

In my humble opinion, nope. It’s something else.

Half a century ago, as the Vietnam War raged and the population flocked to the Sunbelt, conservatives began dreaming of a majority-Republican country. Richard Nixon’s Silent Majority morphed into Jerry Falwell’s Moral Majority, and the religious right was born.

RELATED: The Trumpian breach of faith

The majoritarian dream looked like it was coming into being in Ronald Reagan’s Shining City on a Hill. But then it began to fade.

Bill Clinton became president and, even as evangelicals enabled Republicans to gain control of Congress, the numbers began to go south. Conservative churches stopped growing. The Nones were the hottest demographic in town. When same-sex marriage joined abortion as a constitutional right, the Culture War seemed lost.

And then Donald Trump revived the dream. Sure, his approval ratings were always under water. Sure, he lost to Hillary Clinton by three million votes, to Joe Biden by seven million.

If you believe the numbers. But listen to the man. He won by a landslide, won all states. The election was stolen by a fraud of biblical proportions. Trump and his minions say so. The majority is back!