(RNS) — Advent has always been a season of waiting, of finding light in the darkness. Every evening, my family lights our Advent wreath candles at dinner, beginning the first week with just one lone flame in the darkness and then oh-so-slowly adding another each week until Christmas. I love this tangible reminder of how tiny pockets of joy can brighten our lives even as these small flickers of light illuminate some of the darkest nights of the year.

This season, we’re also waiting for something else, something equally tangible: a vaccine for COVID.

The first doses are rolling out this week, thank heavens. They can’t come a moment too soon. Death is raging all around us, and it’s going to get worse before it gets better: U.S. Covid case counts could hit half a million or more per day next month. That number feels unthinkable and inevitable at the same time.

On a personal note, the virus hit home for us last week, with two family members infected. Things have been bleak, and we are all so, so weary of the darkness. 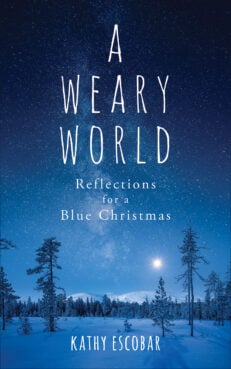 I’m reading an Advent devotional this month that tells me to be honest about the raw ugliness of this moment while also actively seeking the beauty of the light. The author, Kathy Escobar, wrote the book after the death of one of her five young adult children by suicide last autumn. There were no warning signs, no red flags: just sudden, irrevocable loss.

She’s a pastor and spiritual director who was already familiar with  grief — had in fact counseled other people through it — but found herself in the camp of people who are “crawling our way toward Christmas together,” barely able to hold it together because they’re dealing with loss. It’s a group no one wants to be in, but one holiday season or another, all of us eventually find ourselves in it.

While most of the shiny-happy songs of the season felt unbearable, some of them had grief and hope intermingled:

Long lay the world in sin and error pining,

’Til he appeared, and the soul felt its worth.

A thrill of hope, the weary world rejoices,

For yonder breaks a new and glorious morn . . .

This famous hymn gave Escobar the title of her book ­— A Weary World: Reflections for a Blue Christmas — as well as what I would say is a sort of permission. Permission to allow the world not to make sense, to not feel you have to rush in and paper over the cracks of grief.

Yesterday we began the third of Advent’s four weeks, and the weekly theme of Escobar’s devotional is embracing paradox. She points out that Jesus is full of paradoxes, and that starts with the circumstances of his birth:

Jesus’ birth doesn’t make sense in some ways and brings it all together in another. It’s ugly and smelly and also beautiful and hopeful. Three decades later, Jesus—the one who was supposed to save the day with kingly strength and might—dies on a cross, leaving so many even more confused. The essence of Jesus’ story is that we rise by descending. It’s a mystery, yet it’s simple. It’s easy to talk about and hard to live out.

The most beautiful birth in history happened in a place literally mired in shit.

With that in mind, I think I can be honest about the reality of what we’re facing in this historical moment while also looking toward the light, which is growing a little stronger each day.

When it’s not the hap, happiest season of all