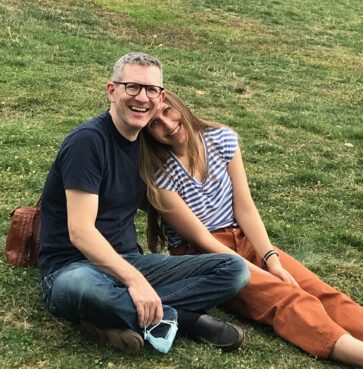 (RNS) — 2020 will be remembered as the year we relied on screens more than ever to do our work, educate our kids and “doomscroll” about the global pandemic. But in a new book written long before lockdowns, Amy Crouch and her father, Andy Crouch, were already sounding an alarm about identifying too strongly with our devices.

Last month, Amy released a sequel to her father’s 2017 book, “The Tech-Wise Family,” with Andy chiming in between her chapters. “My Tech-Wise Life” is smart and timely and worth your undivided attention — especially in an age when undivided attention is hard to come by. I enjoyed talking with both of them over — what else? — Zoom. This interview has been edited for length and clarity.

Andy, you say halfway through Amy’s book that it “really isn’t about technology.” What do you mean?

Andy: I think technology is part of a much deeper human story in two ways: First, it’s an attempt to extend our human capacities, which is why humans made tools in the first place. But it’s also, more problematically, an attempt to compensate for certain aspects of our humanness we are not comfortable with. Our limitedness, our vulnerabilities, our mortality.

People have always had problems with attention. Pascal in the 18th century said the great difficulty of humanity is we cannot bear to sit alone in silence. If he felt that in an entirely pre-modern era, that means the basic problems are not new, and definitely the remedies are not new. There are not novel, innovative solutions to be found. That’s a very technological way of thinking: “Oh, we just need some ‘new’ solutions.” But since technology didn’t create these problems, it’s not going to be the likely principal solution. Fundamentally, we’re going to discover this is about what it means to be a person.

Amy, you say social media tends to exacerbate insecurity and envy. You also make an arresting point that in the Ten Commandments, the one about envy gets repeated over and over.

Amy: Right, it’s the commandment with all the things: Don’t covet your neighbor’s house, don’t covet your neighbor’s donkey. When it comes to envy, in some ways the promise of social media is the promise we’ve been waiting for, which is that we can create ourselves. We have complete control over the face we put forth into the world. It’s not at all surprising we love social media, because it is so enticing to be able to create a version of ourselves without all of the stuff we don’t like. We can just get rid of that.

But I think it’s dangerous, because even if nobody else sees behind that façade, we still know deep down all the ways we are imperfect. The world of social media sets up the situation in which I am aware of everything that’s wrong with me, but I don’t see what is uncool or unimpressive about other people.

I don’t think that’s a good way to live. We have to be really creative if we want to find ways to redeem social media so it can help us see other people’s humanity more. 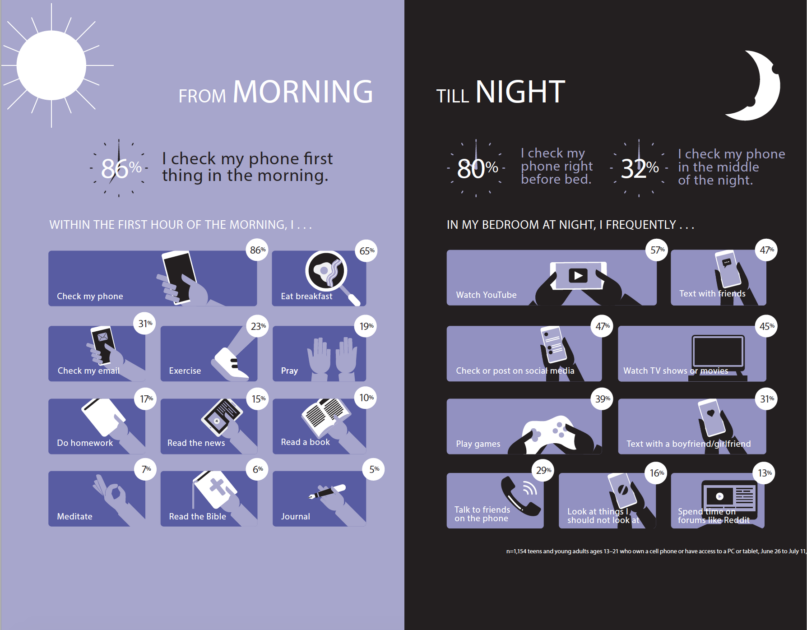 According to Barna Group research used in “My Tech-Wise Life” by Amy and Andy Crouch, most young adults look at their devices just before going to sleep and again immediately when they wake up. Baker Books, a division of Baker Publishing Group, ©2020. Used by permission

Andy, you note there was no word for “boredom” in the English language until the year 1853. You say, “Boredom is a problem that the modern world created and then tries to solve with more technology.” Tell me more about that.

Andy: Boredom enters the language through the noun first: “a bore.” It’s used by the upper classes first in England, who have no actual labor to do. They have outsourced the preparation of food and the care of the land to servants, so they are stuck with one another in drawing rooms and around long tables. Picture “Downton Abbey” if you’re of a certain age. In that environment, where all the usual work of human life is being done by others, you depend on the other people around you to be interesting.

Boredom is a word that only occurs to people with leisure. We all dream of leisure, but leisure is different from rest. If we take it with the full biblical resonance from the Jewish tradition, I would define rest as glad satisfaction in completed work. God has worked, in the creation account, and on the seventh day God is no longer working. God is enjoying what God has made. That’s different from leisure, which is inactivity that’s made possible by the work of others. Others are laboring for you.

We’ve exchanged the biblical pattern of work and rest with another pattern of toil and leisure. Even though many of us feel like we work very hard, often just in front of a screen, at the end of the day we feel like we’ve been toiling. That is another contradiction of technology, which is supposed to free us from toil.

You both wrote this book before there was a global pandemic, before we started living our lives on screens. How has the pandemic changed people’s lives? Andy: Most of us are far more dependent on screens than we were, and these screens can be helpful, certainly in our current conditions. I don’t think we would say there’s anything wrong with this temporary additional dependence.

But this is like living through a war. The residents of London during the Blitz went into basements and shelters, often for several days. Just because you find that basements are more useful than you thought, and you spend a lot of time in them, that doesn’t mean you’re supposed to live in the basement. Sure, it’s not as bad as you thought it would be, but it’s not how human beings are meant to live.

There’s a point of diminishing returns to these screens that we maybe didn’t sense when we had more options. When all of our lives are channeled through screens, we feel how thin these connections are. It was the case even before the pandemic that college students expressed a strong preference for physical, print textbooks. I have to think when this is over, this generation of college students is going to value in-person education. They’re not saying, “We’re digital natives, and we’re perfectly happy with this situation! Thank goodness we’ve flung off the physical encumbrance of in-person education!”

Amy: I never in my life thought I would hear my fellow college students nostalgically remember the days of 8 a.m. lectures, but it’s happening.

Andy: So we’re all realizing these mediums have their uses, but they really have their limits. They are fundamentally not the way we’re meant to live, any more than the basement bomb shelter is. What Amy and I have found in our personal lives is we need to double down on the disciplines “The Tech-Wise Family” talks about, staying away from the screens. I’ve been way more intentional for the last eight months about getting outside for long stretches every day, in creation, just to move my body in the world. And just to have these rhythms of use and nonuse, of benefiting from the technology and no technology. Those rhythms become more essential, not less.

Amy:  I also want to point out one other thing. Especially toward the beginning of lockdowns in the U.S., there were trends of people growing houseplants and making bread and knitting sweaters. Sometimes on the internet this was made fun of, but it actually points to something really important, which is we like to make real things in the embodied world. Those activities are good for our souls. These ways of resting and working can help heal us as we deal with all of the pain and trauma this pandemic has caused.